Halloween is upon us and as the town where the 18th Amendment was drafted, we sure know how to party! We close the streets (well, some side streets), put up all of our Council "elect me" signs and throw a little party we call "Fourth Friday--Midnight Madness!!!"

After a satisfying run at the local pizza buffet, we hit the streets. First up was a vintage shop that we normally just walk past, but the siren song of hot cider and warm donuts was too much for me to take in my weakened condition (that condition being having just gorged myself on pizza and cinnamon rolls).

But...I WAS glad I had the camera. That way I'm not the only one creeped out by what we saw.

Starting the gore fest off is the parade of creepy dolls. 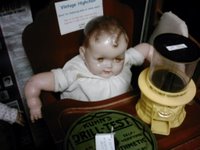 From that we go to the Baby-That-Had-Its-Eye-Gouged-Out: 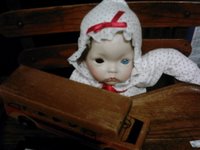 Joan Rivers must really be older than dirt. We found the rare Joan Rivers Doll (I'd say it's sometime after the 3rd plastic surgery but before the 7th time under the knife): 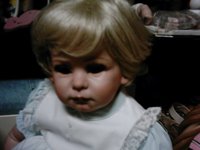 From the creepy dolls we headed over to the $75 hat that everyone had to try on. First on deck was Tommy: 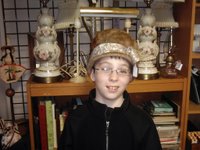 Then Jen gave it a go (and actually sported it quite well): 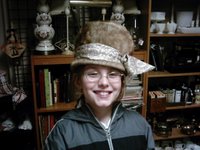 I'm not sure what was in the coffee that Nancy had, but we had to cut her off after this one: 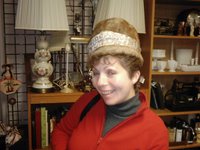 If you were a kid in the late 70's, early 80's you knew the name Ben Cooper. And you vowed that if you ever met him in the street, you'd kick his ever lovin' teeth in. Why? Because, he was the butt munch that made millions selling the boxed Halloween "costumes" (which amounted to little more than a mould injected plastic face with a white elastic band that ripped if you crossed your eyes, coupled with an art smock that loosely resembled whatever character was left on the K-Mart shelf by the time your mom remembered that you needed a costume for the Halloween party at school tomorrow).

Usually what was left was something like this. Ladies and Gentlemen I give you PsychoSmurf: 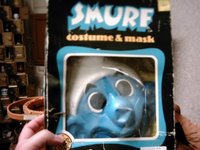 Or, if you were really unlucky your mom came home with He-Man and never once questioned the sales rep who told her the reason they had 3 shelves of that was because it was SO popular that they ordered extra. 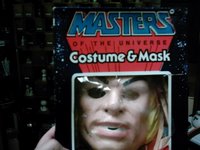 This one deserves a closer look: 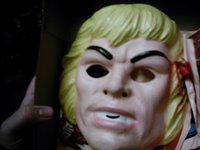 I have to say, though that if Ben Cooper had been on the ball, they could have cleared out the warehouses of the He-Man costumes by repackaging them as the "Dawson" costume. 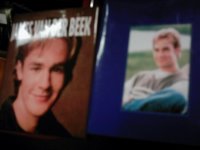 Either way it was a gay costume. It was gay then. It's gay now. So, yeah, it would have been perfect as a Dawson re-issue. By the power of GaySkull!!


And if you were the unlucky pup that got stuck with the He-Man/Dawson costume, you were also probably unfortunate enough to get a plastic pumpkin full of the worst Halloween candy ever....the Peanut Butter chew in Festive Orange and Black Wax Paper: 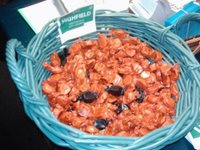