There are few holidays I enjoy more than Halloween. It plays in to my inherent sense of theatrics. Like the severed head. It looks a LOT creepier in photos and video than it does in real life (although it looks pretty damn good in person too). 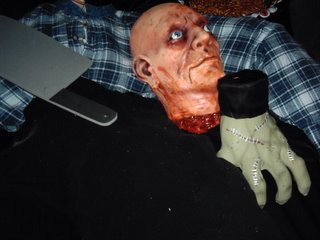 Normally Halloween weekend would find us in Indiana for the annual Monster Nash. But due to some video work I'm doing for the church (and the fact that we had the kids this weekend), we found ourselves staying in Ohio. And, since we were here, we found our way over to our friends' family halloween party (a lot LOT tamer than Nash's, but still enjoyable in its own right.

Nancy went as a 'Pink Lady'-esque hottie from the Grease era. Tommy went as a ghoul of some sort. I was Bruce Banner (after having just changed back from being the Hulk) and Jen went as Darth Vader.

Later, another Vader showed up (along with a dude who fully committed to the Darth Maul costume complete with horns spirit glued to his head). 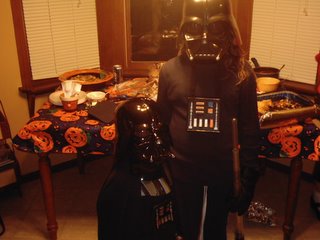 Duane went as Dr. Ben Dover, proctologist. His wife went as a hemorrhoid. Here's a 'sample.' 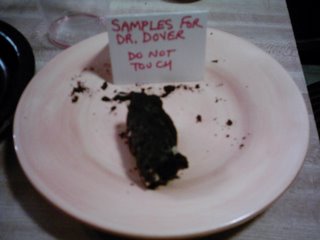 And here's Duane, munching on the sample. It really was quite creative (and tasty, too). 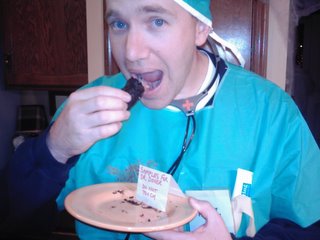 My two favoritist costumes were Dan and Kenny. Dan went as white trash. Kenny was KegMan. And yes, the tap is fully functioning (it's quite bad-ass). 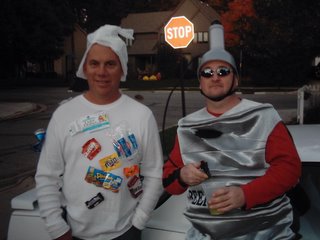 I'll probably post more pictures as I get them (for once I wasn't on the camera the whole night...I was just there having fun).

I'm also expecting some pix and footage from Nash's Bash. It'll be interesting to edit footage of a party that I didn't attend (and yet, I'm definitely up to the challenge).