Candles On My Turkey

That's right, the big 34 is coming up. My birthday falls on Thanksgiving this year (which I LOVE because I can say that my work is giving me the day off for my birthday-holiday shmoliday).

The missus gave me my birthday present early (because she rules-and I whined).
At first I thought it was a CD (based on the 4.5 by 4.5 inch wrapped item), which kind of caught me off guard. I haven't bought a CD in about a year or three, so it seemed odd. The next guess was a movie or game (I've been eyeing "The Movies" by the same dude that did "Black & White," but I figured that to be in a larger box). So I was perplexed. Especially factoring in the fact that she told me (with a fair dose of confidence) that I was "going to LOVE this present." (Turns out, she was right, but don't tell her).

A month or so ago I had looked at this online. The package "How To Make Your Movie:An Interactive Film School" was designed by a film professor at Ohio U and it just absolutely kicks ass.

I also got some extra scratch for some video work that I did for the church (something about them keeping track of budgets or something). I used it to get some used garage toys from the guy across the street that's moving. I wound up getting a lawn mower, snowblower, extension ladder, edger, and a reel for the hose.

I also swung by my local Aldi (yes, the grocery store) and got one of these little babies: 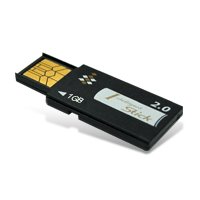 Dude. It's tiny. It has a little shell that you can put it in that makes it the size of a normal jump drive. But it still works without it. It's trippy. It's about the size of my pinky finger (from tip to the main knuckle).

And as an added bonus, I figure by picking up this one, I'll find the one that I lost right before we moved (like the day we moved), because you know that you always find someting you lost as soon as you buy something to replace it.

The other thing that I was looking at was one of these:

It's the gameboy Micro. And it's badass. It's tiny (about the size of an iPod Nano on it's side) and plays GBA games. And it's aimed at techno-gadget geeks like me. It's supposed to have the best screen of any of Nintendo's handhelds.

Granted, PSPs are sweet, don't get me wrong. But they're big (comparatively). And if I were to carry it anywhere, it would be a committment. And I'm not sure I'm up for that. I'm not going to watch movies on it. And it's about $150 more than the Micro. Plus...dude...have you seen how many game boy advance titles are out there? An assload. For about 1/2 of the PSP I can get the Micro...a case...and a copy of the Namco Museum (Galaga rules, yo).

The jury's still out on whether that's going to happen or not (but the magic 8Ball says All Signs Point To Yes).

So, we'll see how that all shakes down. Between that, the FilmSchool in a Box, and the fact that I still haven't finished the birthday video for Nash OR the November National Novel Month OR the pint of Ben&Jerry's Mint Cookie Creme in the freezer.

Well, I can take care of at least ONE of those things tonight.