If you want to solidify your feelings on the human race, put yourself in the midst of mall traffic the day after Thanksgiving.

You will either come away hating people altogether or laughing at the absurdity of it all. "IT" being the fact that no matter how much we claimed to have evolved, shopping for other people is as close to primal as we get in today's society. All the instincts are present. The drive for hunting/gathering. Fight or Flight response. Fierce territorialism. And occasionally, if you're lucky enough to witness it, complete altruistic compassion.

I received from my brother gift cards for Barnes and Noble. I had no intention of venturing anywhere today (terrified by what many foolishly naive newscasters called "Black Friday." Had they actually put an ounce of thought into it, they would have coined it "Bleak Friday" but I digress).

A sudden bout of stir craziness, though, changed all of that. Along with the promise of some leftover honeybaked ham in a cooler on my parents' front porch. Fuggit, I thought. What's the worst that can happen (note to self: "those predisposed to obsessive thought patterns ought not engage in the "what's the worst that could happen" line of thinking. It's nothing but bad news because invariably, I can always answer the question. But again I digress).

The swine pickup went without a hitch and it was off to Barnes & Noble, which unfortunately for me is located in the heart of a shopping mini-city known as Polaris.

Traffic to the shopping center was OK. Not as heavy as when there's a concert, but heavier than your general Friday night fare. I pulled in to the parking lot. 15 minutes later I had a spot. In that short span of time I alternated (with surprising regularity) between laughing at those that got all caught up and upset by this madness and one of those that WAS getting caught up and upset by this madness. It was a weird teetertotter that had me a little shakey when I got out of the car.

I headed to the BN and started the aimless wandering. Going in I had briefly thought of picking up another journal (I can't explain my obsession with having paper journals, but I have to have at least 3 at any given time. Each one has a distinct feel and purpose-hey, I never said I was normal). As I walked around, though, the journallust seemed sated. I found my way over to the film/TV area (shock) and started looking at the titles (many of which I'd read). I thought it ill advised to get another "how to" book at this point when I had yet to peruse the Film School CD that Nancy got me for my birthday. I settled on a book by Kevin Smith and another that interviewed 20 directors (including Smith, Rodriguez, and the Coen brothers) about their first films.

I set those down and wandered into the DVD/Music area of the store. I quickly seized the MuppetShow Season One on DVD and was walking around with it for about 15 minutes while I tried to figure out if I was actually going to purchase it or not. (I didn't)

I went back out and picked up the two books again and started heading toward the front. On the way out I made the fateful error of wanting to "just look" in the journal area to see if they had any cool journal.

And I found it.

THE journal. The journal I'd been looking for for about oh....YEARS.
and they only had one.

The books were set aside. And the journal was picked up and held lovingly. If you're interested, it looks a litte (exactly) like this: 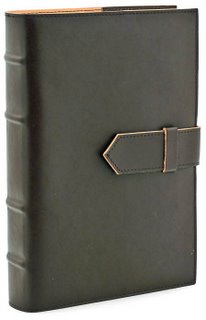 I'm fairly jazzed about this journal. I have maintained paper journals (with a high degree of irregularity) since I was 10. And this is the grail to me. So, needless to say, I'm pretty jazzed by it.

After getting the journal, the day was a blur of pizzabuffet and getting a coat for my daughter (not in that order), and a wallet draining stop at the game store. We got (and by we, I mean me) Katamari Domacy, Jak and Dex (I think that's the title-Jen picked it), Intellivision Lives (60 Intellivision games-word!), and MDK2 (this one is all me-no kids allowed), along with the StreetFighter 15th Anniversary Controller (with the buttons FINALLY in the right place on the damn controller-if you play fighting games, you owe it to yourself to get this. I found it at GameStop, new, for $5).

And then we came home (to find that the videos I had burned for Nancy to take to Indy all froze at 15 minutes in. But that's a story for another page).

And that takes us up to now.