Hit the thrift store today at lunch. Met Wayne there. I didn't think it'd actually turn in to a topic for a post (afterall, I was only looking for a new sweater vest, honest!)...but I got a post.

But I got so much more.

I have to start off with the major feat (that should secure my title of Thrift Store King and assure my place in the pantheons of history).

Ladies and Gentlemen, I give you one freakin' hard to come by record: 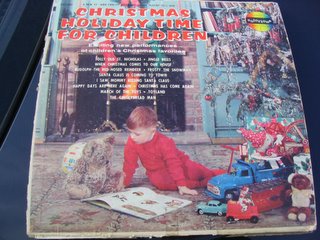 My friend Darrin is on a quest to get the records of his childhood. Some of these he managed to rescue from his parents. The beloved Christmas album, however, was not among the survivors. It had fallen victim to a spring-cleaning/Garage Sale incident known only as "that day"*.

Darrin wanted to test my prowess as the ThriftStore King, so he says to me. "Todd, I had this Christmas record when I was a kid. It has some Christmas scene....tree...kid...truck...that kind of thing. Oh yeah, and it was on Colortone records. Can you find it for me? I haven't been able to find it anywhere."

That was FIVE YEARS AGO. I started the normal places: every thrift store in town...then I resorted to eBay (which I was sure he had already done), record conventions...and then I found GEMM. It was a listserv of hard to find records. During the course of my hunt, I had found out that anything on Colortone was insanely hard to come by. You just don't see anything on Colortone anymore. So, after 5 years of gettting my monthly GEMM email saying someone had Mihalia Jackson on Colortone for $11.35 in Chicago...Wayne and I hit the Ohio Thrift (known as my holy ground of choice). And there it was.

Center of the shelf. Right in front. I had found it. Dude. Indiana Freakin' Jones right here at your service. I was seriously stoked.

Pumped by my find, we headed up to the sweaters. And that's pretty much when it all fell apart.

I have since dubbed the rest of the day Gay Shirt Day. There are three degrees of flame that we saw.

The first was this one. 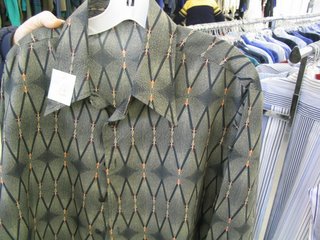 Now this one wasn't TOO bad. It's definitely a low smolder. I MIGHT be coaxed into wearing this if I was going to be someplace where there was an abundance of alcohol. And women.

Next we get to the mid-line: 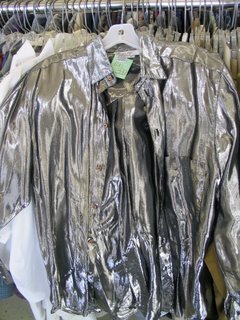 You can't tell from this picture. But this one is silver. Yes. Silver. And Shiny. Very Shiny. There are very few circumstances I can think of where I would ever wear this. In fact, I can think of none. This is definitely a Medium Flame Factor. Only someone secure in their homosexuality could go out in this.

And that brings us to the High Flame. There is no question that this one is for seriously HOT dudes. Ladies and Gentlemen...I give you today's HFF winner: 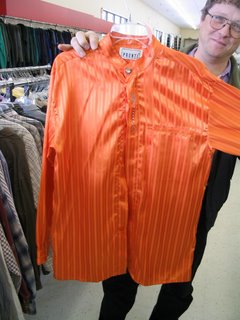 Today's winner comes to us courtesy of PRONTI for Men and is modeled by Wayne (who also agreed he would not be caught dead in this shirt). You can't see it unless you zoom in on the full picture, but there are actually some bedazzler-jeweley-encrusted things on the front of this.

Now, I'm sure that in some parts of the world (like those where having more money than sense is the norm), this is considered high fashion, but folks, if I won't even pay $1.99 for the tux shirt from hell, what does that tell you? Exactly. It's natty no matter how much (or little) money you have.

I would like to say that the use of the word "gay" is meant solely as a classification for something that I would not wear (or do, or be). Nothing more, nothing less.

Oh, and in case you're wondering, I did find my sweater vest. :-)

*I don't know if this is actually what happened to the records of Darrin's childhood, but it made a good story.