There is a subtle sadness in the air. Media Play-the goliath that once challenged other retail outlets for entertainment media supremacy- is on life support. And they're about to pull the plug. 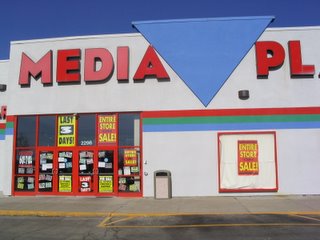 Basically everything is gone. There's one shelf of PC Games, a few are even from the last year or so. A shelf of magazines that nobody will buy sits across the only copy of TRON on UMD that I've seen (or may ever see). And display books (each defective-with something wrong, the sign says) beckon to be taken home for a mere $3. The bookshelves, however are free. 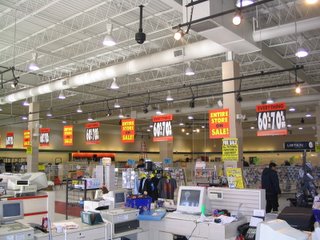 At first glance, it's tough to really spot the change. But a closer look, or a mere shift to the right reveals the extent of the desolation: 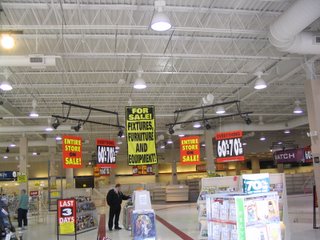 Everything must go. And will. Not to my house, of course, but someone will buy one of the 45 remaining copies of Into Thin Air on DVD for a mere $6.

It makes me a little sad. I liked Media Play. It was the pre-practice (and sometimes during and post-practice) diversion before meeting up at Darrins to pound keys in Devilcake. And it was a quick lunchtime jaunt from work.

But what it really was was an alternative. An alternative to BestBuy. I'm not a huge fan of BestBuy (I mainly consider it a necessary evil). Media Play's prices weren't all that much better, but every now and then you could catch some sweet deals on cut-outs or used items. And spending an hour in Media Play wasn't nearly as draining as spending an hour in BestBuy. I liked browsing there better.

The people at BestBuy obviously knew this, so rather than let the 2 chains co-exist, it was easier to purchase Media Play and kill it off. They will of course, leave Sam Goody and Suncoast Video alone. After all, they are typically found in malls and are of a different market segment.

I concur. I will miss Media Play. I don't think I have ever seen a closeout bin at a Best Buy. Ever. Plus, Best Buy doesn't carry books. And I dislike Barnes and Noble. But I guess that is why we have Half Price Books and Amazon.com, isn't it?

I went to our a few times. I got a car adapter for my wife's phone for half off. I got the Brady Bunch Season 2, but the savings wasnt that great since the price was the usual 20% above Amazon.com price. But, it was the season we needed to own next and the price wasn't too bad. I may have bought something else, but I can't think of what that might be. *shrug* I may go again tonight just to see if there is anything left worthy of spending $5 on.

Btw, did you buy a guitar or not?