A trip into the community fridge at work can prove quite frightening. Oh sure...it looks innocent enough.

But think back. When was the last time anyone at work ordered Donato's? 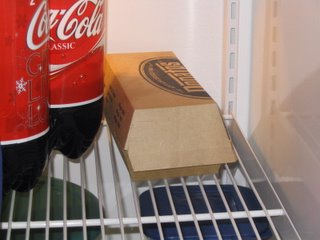 Well...lessee....we had the pizzas in class last week. So...could be that. No, wait a minute. Those were just pizzas. this is clearly a sub. Maybe someone brought it from home.

But...if not...the last time subs were ordered in was November.

This couldn't be that old, could it? 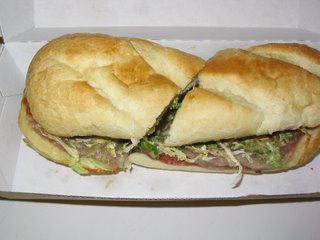 Well...actually, I guess it could be.
Oh...that definitely looks like a 2+month old sub. A quick peek under the bun confirms it. 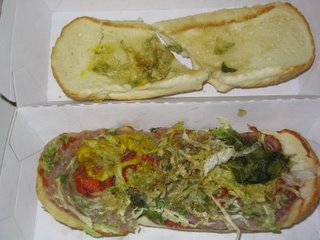 In other news, a piece of my musical past came back into my life today. This lovely Sam Ash wannabe fender was my first electric guitar. Purchased for $100 +tax in the summer of 1998.

A year or so later, I sold it (gave it? maybe sold it) to a guy at work. He's had it ever since. Until today. Turns out that this weekend he moved into another house and was looking to clean house a little bit. 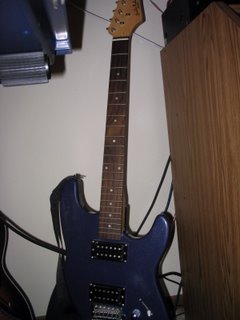 So the Carlo Robelli comes home to papa. And I have to say...it's kind of a piece. of. sh. No, really it is. I mean, sure, for $100 8 years ago, it was OK. And it seems to have held up fairly well (after I goo gone'd all the sticker residue from the body). Before stripping off the 8 yr. old strings, I plugged it in to the Alesis io|2 and plucked around on it. Either the 8 yr. old cable is touchy or the cable jack is. Either way, there was a bit of hum and feedback and interference as I did my best James Dean.

I stayed clear of the whammy bar (I took it off before snapping the pix), because everyone knows that whammy bars on cheap guitars will cause strings to go way out of tune very easily and cause your strings to wear a lot faster....right, Darrin? 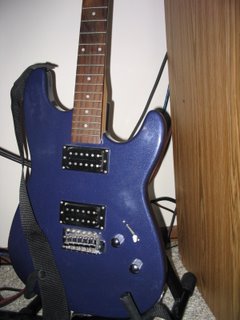 But I have to say, it's still nice to have. Now I can have either the accoustic or the electric on music projects. I would eventually like to pick up a little pukey 10watt amp (nothing too fancy, because the guitar doesn't deserve it), or maybe just a crunchy distortion pedal to get some tonal differences when recording (I should have gotten one at MediaPlay during their last week-for $30 it was almost too good to be true...and $40 for a wah-wah...oh well, that's what eBay's for). Either way, it's good to have my first 2 guitars back home.