Sources in Westerville Ohio say that largely unknown but soon to be huge independent film maker, Todd Skaggs, recently re-arranged the area in his home known to insiders as "the studio." Lucky for us the cameras were there. 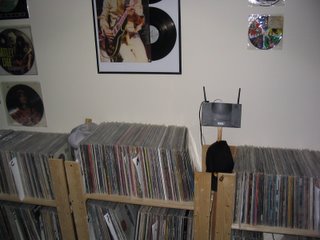 Yeah. The cornerstone of the studio space (really, explore the studio space) are the albums. The collection was recently infused with a healthy dose of vintage 80's fodder.

And yes, that is Frampton Comes Alive thank you very much.


While the collection may not seem huge, it's no longer about quantity (as it was say, 4 years or so ago when it topped out around 2000 albums). Now it's about what I actually feel like listening to. The albums on the shelves are about 1/2 of the total collection, but are largely albums that I still enjoy listening to. 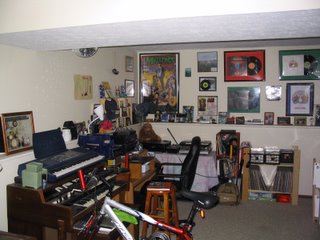 This shot was from the other half of the room. More of a medium/long shot. 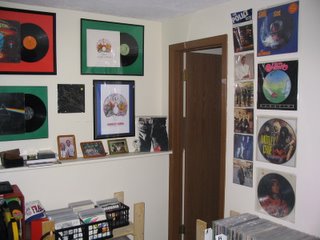 No studio/think-tank area of mine would be complete without immediate access to indoor plumbing. Seriously-it's where I get some of my best (and worst) ideas. No shit. 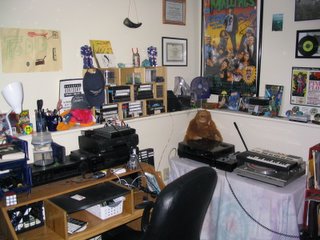 Closer shot of the desk (sans laptop). On top of one of the turntables are the 2 keyboards from Christi (both Casios- the SK-1 and PT-80). They will be featured prominently in the soundtrack of my next piece of work (whatever that may be). Maybe an Album-A-Day or a 48Hr. Extreme Film Festival Challenge. I haven't decided yet. 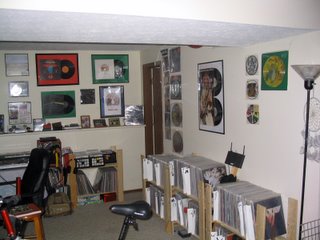 Another long shot of the room. Rendundancy is my middle name is redundancy. Yes, that is The Jungle Book picture disc.

And there you have it. It doesn't feel nearly as cramped as the first revision did. I think splitting the albums shelves and putting things along the wall helped with that. And Peter f---ing Frampton couldn't hurt either.

Yes, I framed the albums myself. No, I don't feel like a hyprocrite for preaching the virtues of vinyl and yet framing it to be "art." The framed pieces are copies. Purchased specifically to be framed. I have each of the titles on the shelves, too. Ready to be played at the drop of a hat...or needle, as it were.

And now I leave you to go back to the online film school course that Nancy got me for my birthday.