2006 is already fast becoming the year of change. MediaPlay is closing in....4 days. Thanks BestBuy for buying them and closing their doors. Of the two overpriced media outlets, BestBuy certainly wins in its mega-ness, but it's the little quirks about MediaPlay that I grew to love. And now they're about gone. But I am assured that my replay card will still be good at SamGoody and SunCoast Video should I choose to pay even more than the BestBuy prices on media. They are now at 70% off of anything left in the store. I'm eyeing some of the electric guitars....they're down to $80. Of course I still can't play it for shit. Well, ok, I can play a few things and can get off sounding like most other dudes my age who tried to use the guitar to impress the ladies in my college years. But still-it might be nice to have an electric lying about for whenever I got the urge to wail.

Speaking of wail...wtf is up with this Santana/Steven Tyler duet?? Seriously. Dudes. Santana doesn't go off and comes off sounding like a bad Joe Perry impersonator. And Steven...does he really need the boost that comes from a single with Santana? I mean, really. It's not like he's Rob Thomas or Everlast or anything. His career is doing just fine. I can see it now..."You don't want to do my song Joe? Fine! I'll get Carlos to play on it. And just to piss you off, we'll put it on HIS album."

The real reason for the season is the thrift.

I really wasn't going to thrift tonight (and in retrospect, I should have stayed with that inclination), but due to the pleadings of one of my 4 regular readers, I decided to hop back in the saddle.

I headed over to OhioThrift after work, and let me tell you-conditions were not optimal for thrifting. Yet I pressed on.

I set the goal of finding a brass napkin ring (it's always good to have goals because you find the coolest sh*t when you're looking for something else). This goal was not to be met tonight. But I got more.

Oh so much more.

I could tell as soon as I walked in that something was different. A smell...a feel. Something.

And then I found it. And I knew in that instant I was right to be worried. 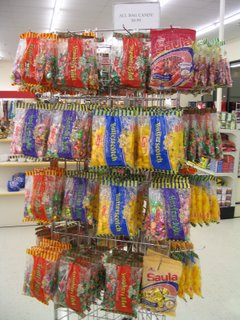 Oh no. The .99 cent candy was organized on a (dare I say it) retail display. Crap. The candy had always been scattered at the registers. Left in disarray by cranky toddlers still pissed that their moms didn't buy them that secondhand BluesClues doll.

This was a bad omen.

But hey. No worries. For a mere $13.13, I could be a freakin' all star quarterback beyotches! 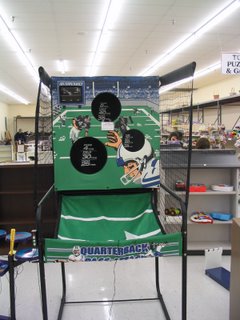 I was kind of fried after a day of Reports Training, but I wasn't too tired to appreciate the irony of this doll: 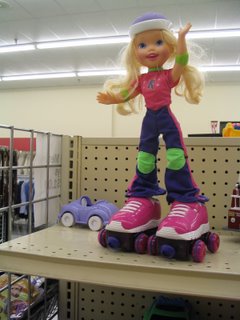 For years people have argued that if Barbie were real, she'd fall on her overinflated bosom because her feet were too danged small?? Well this is the polar opposite. This kid's feet are so freaking big that someone's gonna get squashed. 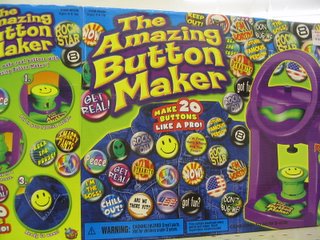 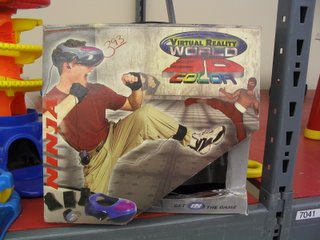 What little Billy didn't know was that the Ninjas were REAL!! Only he couldn't see them unless he had the goggles on. And no one else could see them-ever. 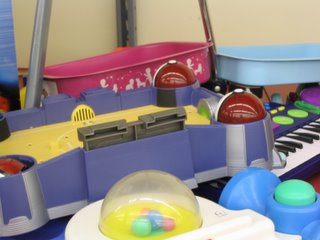 It wasn't until much later that I realized that this was probably a Pokemon toy of some sort. My dreams of Hef making toys would have to go unrealized another day. 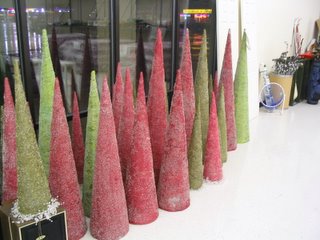 Take a left at the Gingerbread House and go through the Candy Cane forest on your way to the Gum Drop Meadow (Yes, I'm fully aware that it was a loooong way to go for a Candyland reference). 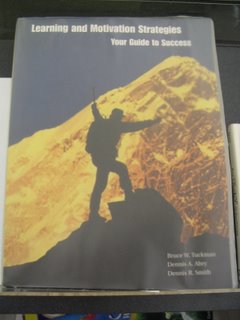 When reaching for magma, you should make sure to wear an oven mitt. And an LL Bean hunter cap.

Good boots are always important, too.

There was some other book about "Beating the Streets" written by some white guy who looked like he'd never even been on the streets. It was just too easy. 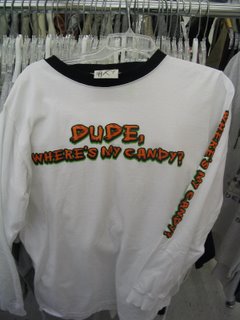 OOH! I know! I know!
Your candy is up front!! I mean MY candy.
This was killing me. This shirt was XL. It was sooooo me!! 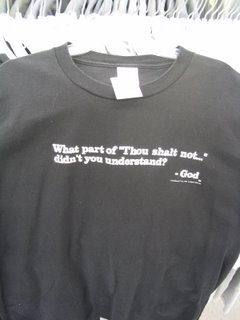 THIS shirt did come home with me. Mostly because I'm as curious about the answer as apparently God is. I may wind up giving it to my brother. He'd probably where it before me. 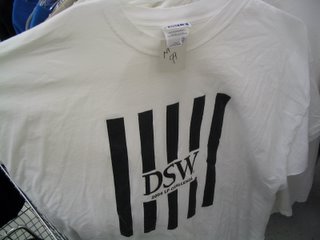 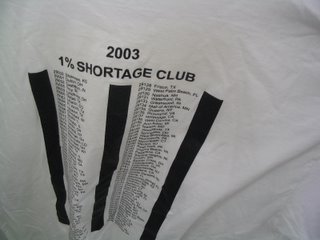 The irony is...they did wind up being about 1% short. 1% of the customer account data did wind up short. 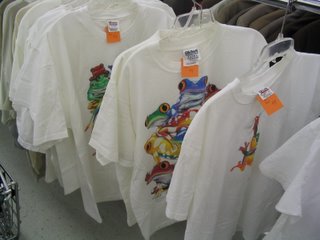 You know, one frog shirt just isn't enough. I need THREE! Lucky for me I know where I can find some for only ninety-nine cents! 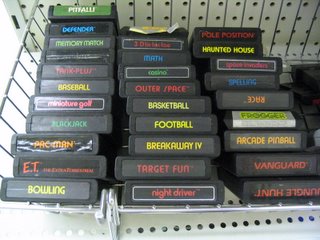 This particular find made me sad. For several reasons-the main being that the Atari2600 was no where in site. The second was that these cartridges were $1.91 EACH. Dude. They're almost 30 years old. They shouldn't be two bucks each.

But what's really sad was amongst some of the really GREAT titles (Defender, Pitfall, Q*bert, Frogger) was quite possibly the biggest turd of ALL Atari games. EVER. 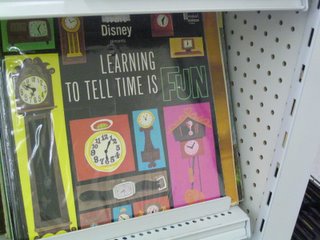 Disney started the lies a long time ago. There's nothing I can think of about telling time that would be remotely considered fun. 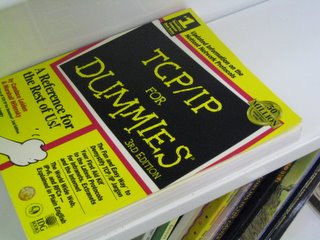 Pop Quiz: What's TCP/IP stand for?
If you can answer that question, the LAST thing you need is a For Dummies book. 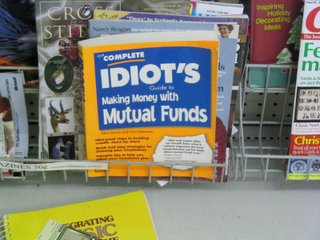 I saw this and had one thought-how funny would it be to make money with my idiot's guide...and be sipping rum and cokes in Cabo and rubbing elbows with the people who merely inherited their money. 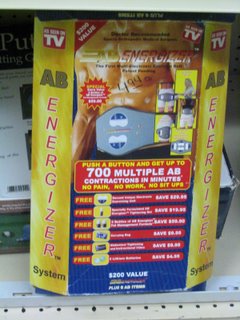 Hey! I'll never have to excercise EVER AGAIN!!! I can just plug in and sit on the couch and zap the pounds away!!!!

Look. It HAS to work. It worked so well that the guy who had it before didn't need it anymore. 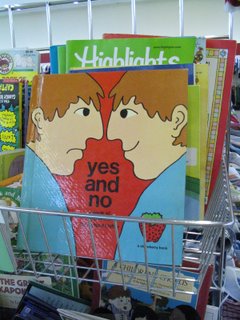 It's the book of indecision.....for kids! Or maybe not. 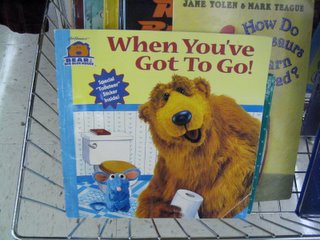 I can't tell you how much Bear in the Big Blue House creeps me out. I think it's the eyebrows. And now that he's helping teaching kids how to take a dump?? This disturbs me.

Well, I had a couple more pix, but apparently Blogger's turding out on me. So I won't. Suffice to say the last three pix evoked references to Karate Kid, Roots, and stinky feet. I guess you'll just have to use your imagination, eh?

I walked out with the Godshirt, some fruit chews, a package of Stinky Feet...and something else, but I forget what it was...oh yeah-microwave popcorn.

Alright-off to watch the crazy bare-footed druggy on American Idol.---Holy crap!! They sent him through!! What the heck??

*And now to explain the subject-I have always thought that Scotty had a secret stash of dilithium crystals hidden in his quarters somewhere just to mess with James T. Kirk.
at January 17, 2006

Thank you for making my day! I enjoyed the posting alot, although I never had an atari, so I don't know which game sucked the most.

Thanks for facing the thrift experience under less than idea conditions--you rock!

Hmmm...I'm guessing the Atari cartridge labled "Math" is the stinker. Because we all know that math is NOT A GAME.

Well, while that is completely valid, it's not the answer that we're looking for. There is a clear cut turd.

If Darrin chimes in, he'll know. If not, I'll post the answer tomorrow. :-)

it's the ET game.