Nick of Time and Then Some

Dudes and dudettes, What a wild night!!

Last week, you may remember, I ordered this lovely (and tad bit sexy) piece of hardware: 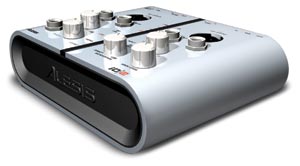 OK. you may not remember. I don't know if I mentioned that I sold one of the turntables and the DJ mixer to get this (but I did).

It's the Alesis io2 a nifty little piece of gear that connects to the USB port on my laptop and handles MIDI, 1/4", XLR, and sPdif.

I got it yesterday and up until about 15 minutes ago, I was about to send it back to the eBay shop I bought it from (they have a pretty liberal return policy).

I was having horrible latency issues. Not to mention playback was totally screwed and the soundcard on my laptop decided to take 5 when I used the thing.

And then tonight, I unraveled the mystery....friggin' CubaseLE! I've got a 1.8Ghz laptop with 512MB of RAM and there was a good 1-2 second latency on anything and the MIDI was just taking a huge dump. All of the stupid sync and buffer tests were failing. I have to say I wasn't too pleased.

So, I unloaded everything. And fired up Adobe Audition. Set up the input as the io2 and the output as the soundcard on the laptop. And it worked. Like a freakin champ!!

Did the same thing in Acid.

So, all this to say I'm jazzed. I did a few tests with the mic and the keyboard and it's SO much better...a lot less noise...than trying to use the 1/8" jack on the laptop (not to mention the soundcard on the laptop is very basic and not really designed for the level of audio I want to use it for).

So...if you have a laptop and you're planning on recording, I'd drop the scratch if I were you.

Speaking of dropping scratch...it looks like I may come into a little extra in the near future and I found the SWEET deal on B&H's site. It's a Panasonic 3CCD camera and accessories for around $700. I will finally be in the land of the 3-chips and that coupled with the io2 really seals the deal, studio wise. There's little else I can honestly say I need now. Possibly a "real" light kit at some point, but until then, my halogen work lights will be just fine. I may try to figure out a way to put them on a dimmer so I can control the temperature a little more.

I did some more digging on the documentary front, too. It's gonna take a lot of digging and prep work before I even make the trip to D.C. I talked some more to one of the people that I'm working with on it and am going to get some more contacts locally to work with on it, too.

I found out something about myself yesterday. The fact that when I want to make a movie, I want to make it NOW :-) but it doesn't quite work out that way, does it? Don't bother answering, I know the answer :-)

I also made some headway on the DDR short. I cast the main lead for the father. Someone I work with who actually plays the game (a plus).

Other than that, there's not much new on the TZP front (but thanks for tuning in all the same) :-)

Now, on the personal front, it looks like work is sending me to the User Conference in February. It will be the first one I've gone to (I came to the company in '98, they started doing conferences in '99). I'm not going to get bitter or say anything bad about the company or the job. I'm doing very well...the company is doing well, and I'm finding that working with the system is taking me a lot further than pissing and moaning all the time. Now, don't get me wrong-if I get a major movie deal, there's no question as to where my passion is...but work is good.

It's kind of funny. I used to use my Livejournal and Blog to whine and complain about how miserable things were in my life. But to be honest....they haven't been miserable at home (or work) for a long time.

Ooh!! And I've also lost a few pounds and I'm riding my bike every day. So-that's good, too.

So-enough about me...how have things been with you?