The Battle of Yavin

Greetings fellow thrifters. If you've been keeping score, you will know that it's 1/2 price Wednesday at the Ohio Thrift Store.

And did we score?

Oh yes. Yes we did.
If you've read this blog before, you know I normally hit the toys first, then the t-shirts, then everything else.

Today since it was 1/2 price on all clothes, I deviated slightly and went straight to the clothes (there were some big dudes there and I didn't want to have to Indian wrestle them for the only pair of 46/30 jeans in the whole store).


On the way to the clothes I noticed this. 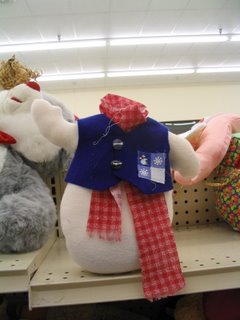 What genius put this on the shelf?? Who in the hell wants a snowman with no head??


And now a little foray into some of the clothes (yes, this post is slightly out of order. Events did take place sometime between 7:15PM and 8:49PM...after that, it's pretty much a blur).

My mom goes to Vegas a few times a year and I'm pretty sure not even she would be caught dead in this shirt. Nonetheless I have no doubt that it was upwards of $25 in some swanky hotel gift shop. 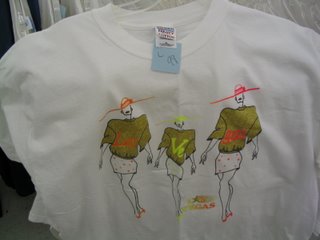 Remember Sit-and-Spin?? It was a rotating disc on a base and you turned yourself (and the disc you were sitting on) by "steering". I know kids these days would probably never go for that. First of all there has to be a good reason to spin (and to be honest, I don't think there ever was). Secondly there needs to be some kind of visual stimulation for modern kids. Well, it looks like the fine folks over at Playskool have taken care of that. They've come up with the Music & Lights Sit 'n Spin:Rockin' Tunes. The premise is simple. Combine the classic Sit'n Spin with Simon. No good can come of this. Even thinking about it now makes me throw up in my mouth...just a little bit. 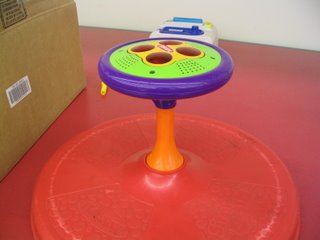 I don't know what it is with South Park Shirts, but I don't consider it a good day of thrifting anymore unless I see one. Today was a good day. 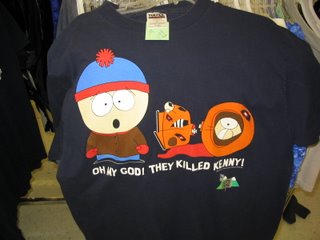 I watched America's Next Top Skating Idol...or whatever the heck that show's called the other night (and no, I do not want to talk about it, thankyouverymuch). But I felt like this vest really would have fit right in. It's definitely off the flame-o-meter. 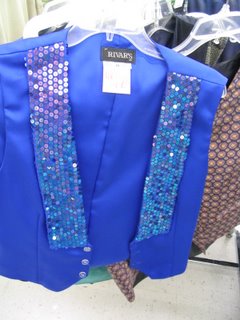 There appeared to be a snake theme running through tonight's foray. This was a shirt that I was sure would fit me. Nancy, though, has vision that is not skewed by, well, being me. So we left the shirt. 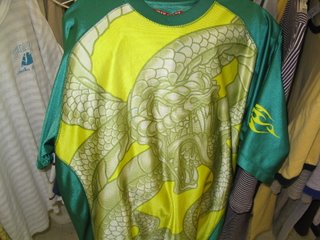 But we took this one. I don't care if it fits or not. I'll make it fit, dammit! It was just too cool to leave behind. 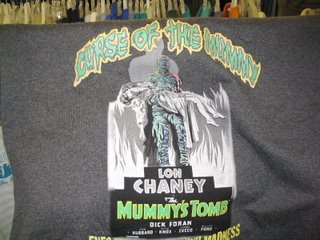 This shirt would have been great for Tommy. If he was like, older. Or wore an Adult XL. But he is neither. I find it interesting how much like the logo for Flash Gordon this looks. 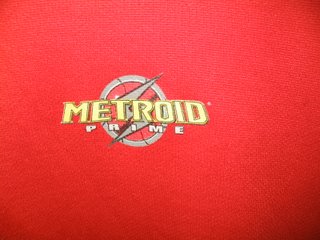 This concert shirt was from the IMPACT WORLD TOUR. Apparently it had less of an impact than they had originally hoped. 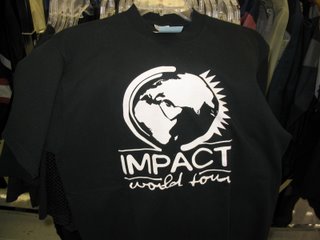 And this is a shirt that no one in their sober mind buys (or wears)...ever. Now, that's not to say there haven't been times when I wish I had a great shark party shirt. But it's been many many years. 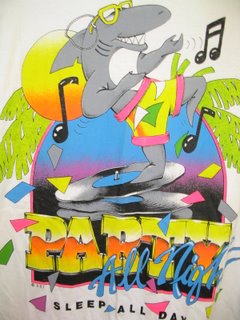 The store supposedly sold "Hot Gifts." This shirt, however, was not one of them. 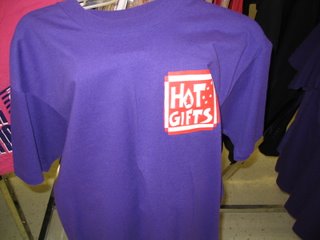 I imagine the conversation (in someone's head) going a little like this:
"Damn, son! $3.99 for a fine pair of cammy overhauls! And they's half price. So we're lookin' at somewhere abouts 2 bucks. Hmm. But I've got 3 pairs already. Shit. Still, hate to pass up such a find. Hey momma! What'choo think? Reckon we otter get 'em?" 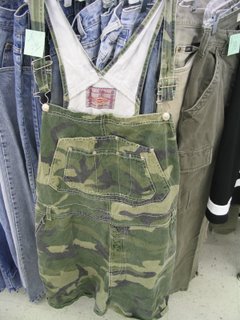 Living Free. In Cobra-infested neighborhoods. One has to wonder how free you could truly be with the constant threat of cobras lurking about? 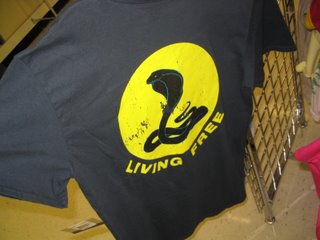 Geeks unite! In my day, you had to hide the fact that you knew how many hit points it took to kill a crystal dragon (1400), but now with the MMORPG's, it's cool to be a geek. Geek is the new...er...geek. 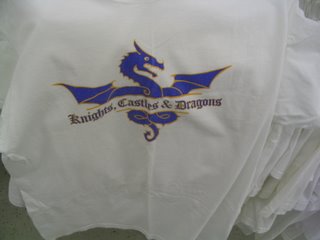 Quite possibly one of the worst movies ever (certainly on my top 25). When I was growing up, my grandparents got me an 8-track player boom box and I told my parents I wanted Sgt. Pepper's. I got this. On 8-track (NOW it all comes into focus, doesn't it??). 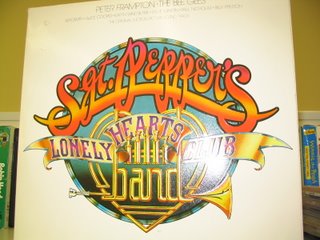 Now, I need to take a moment away from my comedy gold and just ramble (you knew it was coming sooner or later, don't act surprised). But tonight at the thrift store, I found something I have never seen at this particular store-vinyl albums...in REALLY good shape. And in plastic sleeves (and yes, I did buy the above mentioned Sgt. Pepper's album). I got about 11 albums tonight, the first albums I have purchased (if memory serves) in about a year or so. So, needless to say I was jazzed.

I didn't get any of the other 'secret shopper' items I had planned on getting over here.
But I got albums.

And I got something more. 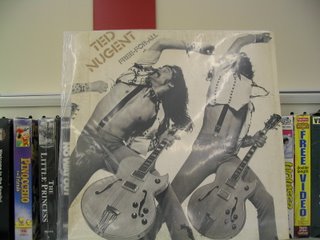 
As I was leaving, I had a moment of panic creep through my vinyl euphoria....I had made the bold claim about Lionel Richie's presence in any thrift store of merit. I knew, though, that I didn't see it on vinyl as I was flipping through.

Trouble was brewing. And then I saw my salvation--The Cassettes!!


And there, among NU SHOOZ and Heart I found it : 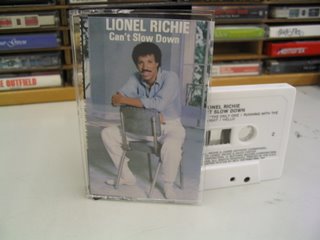 The store passed!!! It retains it's CSD (Can't Slow Down) Certification!!!!!

And now if you'll excuse me, I have to go try on my mummy shirt with the cammy overhaulin' shorts!
at March 29, 2006

yay! I LOVE the thrifting posts! :)

I haven't been getting out at lunch as much as I used to, so they don't happen as often. But I think that's just gonna have to change! :-)