So...you may recall that I recently got my very first P.O.S. Electric Guitar back. And you may also recall the folly with the "amp" from Freecycle.

From Bob at work I recently got a Vox Pathfinder 15amp which looks a little (exactly) like this: 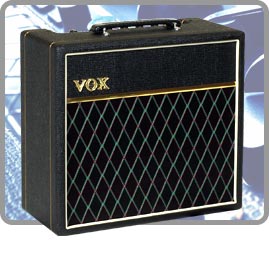 I have to say, the amp freakin' rocks. It's got built in tremelo, and this killer overdrive feature which makes the thing sound crunchy as all get out.

I give you the theme song to the soon to be hit WB-Series, "My 'Tard Husband." I call it "shortbus." Take a listen here. It's about 3MB in size and 4:14 of unbearable cheese (and the guitars get markedly louder at about the minute mark-you've been warned). See...my guitar playing is on par with every other high-schooler's right about now. I just this weekend figured out "Iron Man" and bits and pieces of "Wanted Dead or Alive" and I'm dangerously close to wanting to be in a rock and roll band and grow my hair long (ok, just kidding-I'll keep the short hair). So...while it's not the most musically advanced, it meets my a-number-one criteria....it's fun. Fun to just wank around and not take it seriously in the least. Fun to just let go with the whammy bar (but not too much, we all know how those cheap whammy's kill strings, LOL). So...that's me. Having fun.

And of course, since our entire household happens to have the music gene, Tommy had to get in on the act. He strapped on the POS and did his best Richie Sambora while I accompanied on the drum machine and synth. It wound up to be a 23+minute jam of mind numbing proportions. I stripped out the warm-ups. The jam can be found here. So, yeah, that's Tommy on the guitar (minus the whammy bar-didn't want him breaking the strings).

I have to say I'm proud of a couple of things. One was mine (and Tommy's) ability to just let go and play and have fun and not give a rip what notes we were playing or even if it made any sense. It was just fun.

The other thing I'm pleased with is how the Alesis io2 actually performed. I recorded it all in to Adobe Audition with no burps or hiccups. It's going to work out really well, I think.

Rock on beyotches, rock on!! 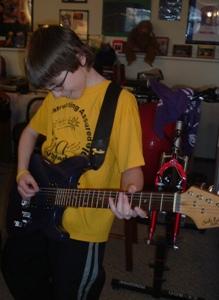 My ears are bleeding.

and Grandpa says, "Toomy, start a rock band and make millions so I can borrow some in old age !!
Grandpa

His name is now officially TOOMY.

BTW...around the 22:50 mark of the todd n tommy jam, I heard the drum riff from 'Head to Toe' by lisa lisa and cult jam.

Yeah that was totally the "Fill" on the HardRock2 preset of the Alesis. I heard it too. That's why I kept trying to do it. :-)