From the WTF Department

I apologize in advance for the randomness of this post. I'm kind of all over the place on this one emotionally and all that.

So...first off, I want to say...look for a new thriftstore post tomorrow.


Secondly...I'd like to say that I'm thinking of getting in to the Sticker business. Here's my sticker. Want one? 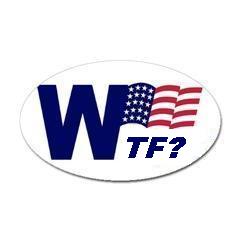 I plan on making some or finding someone to make some. More for gag gifts for my friends.
But I got so sick of seeing the W'04 ones. And who knows..maybe someone already has one of these.


*UPDATE*...Looks like they're already selling these over at CafePress. Oh well.


Alright...now to the downer side of things (back away now, if you want).

A teen at church last weekend killed himself (at least that's the preliminary ruling) at a church retreat. He was 18, involved in the contemporary worship band, had been accepted to college...was well liked and involved in many church groups.

So...what the hell? Suicide? I guess some part of me is more comfortable in thinking there was foul play involved than that this young man would just kill himself outright on the day of his 18th birthday.

I'm not going to sit here and BS you and say that the thought of self-offing has never crossed my mind. It has. And yes, mainly when I was a teen. But that was 20 years ago....and the thought now is just like "hell no! You're gonna have to drag me kicking and screaming out of this world, bitches-I gots too much to do! Too many movies to make!"

The thought that things are so bad, that there's no one you can turn to, that death seems to be the only solution is foreign to me now. That part of my brain that could ever identify with it is no longer with me (thankfully).

And the other thing about it is, it truly is the single most selfish act someone could ever commit. It's the last-F-You. And it doesn't help. It doesn't solve anything. And it doesn't answer any questions.