Mmmmmm. I love White Castles. Unfortunately, the affection is not reciprocated. Nonetheless, it was worth it to have my Whities last night at 1AM. Of course, I had to go 4 hours away from home to get them. Well, I didn't have to, but I never get them in Columbus, so since I was not in Columbus, I got some. And Jen had some White Castle fries (which, contrary to the Beastie Boys song, no longer come in only one size) and some of my onion chips. The reason for this gluttonous feast?

Dylar's 13th birthday party. Dylar is Dylan. Son of my wife's cousin's husband. And they live in Indiana. And a couple of weeks ago, they asked if I could dj his birthday party of about 20-25 13yr olds. So I said "sure" and proceeded to panic about whether I would have the sufficient gear and "cool factor" to dj such a bash. Turns out the gear took care of itself and the cool-factor was really irrelevant. It's a bunch of 13 yr. olds. They have no idea what cool is yet. Cool is saying "sh*t" or "f**k" behind their parents back (ahh, the good old days).

Tommy and Nancy had other comittments, so it was a Father/Daughter road trip. Picked up Jen yesterday afternoon and we headed to Indy.

All in all the party was a success, I'd say. Besides the fact that I didn't have enough slow-songs and not having "Hips Don't Lie" appears to be the just-turned-teen equivalent of a cardinal sin, it was a pretty good show. The strobe lights were a hit. And the fog. Everybody loves a fog machine. I don't care where you are, there are very few events that can't be bumped up to that next level with a fog machine and a driving beat (Ahhh yes...I can see the head >shoooooosh< >thumpathumpathumpathumpa)

So. It was fun. Jen won a $10 Target card for her burping prowess (she makes me so proud!) And we stayed over at the RedRoof Inn (which was right across the street from the White Castes-so choice!). Ate at Bob Evan's (again within walking distance to the hotel) and hit the road. We just got in. And I'm gonna go take a nap...but not before I tell you two things (one cool, one scary).

The coolest. Nash surprised me with a kick-ass gift (as if the hotel, free pizza, pop, nachos and salsa weren't enough). A black and white trucker's hat. But Todd, you say, a hat's not cool. Au contraire, mon frere. This hat is freakin' inspirational y'all. I had come up with (thanks to Nancy's help) the quite straight-forward dj moniker of "SonicTodd." This, however, just kicks that to the curb imho. 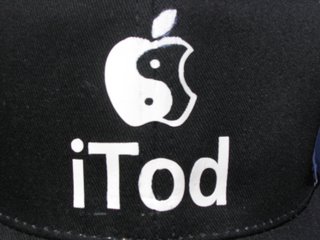 It's sheer genius. He found the Apple logo and infused it with my ongoing theme of the yin and yang (you hear that Lil Jon? It's YIN...not YING. Ignorant f***!). And he managed to find the actual iPod font (which apparently was not easy). And since I deejayed with the iPod, laptop and an iPod Nano from one of the party goers, it was oh so apropos.

It may stick. Even though I thought the logo for the SonicTodd stuff was the bomb...this sh*t is even cooler in my mind. Made cooler still by the fact that it was dubbed upon me...not something I had to make up and try to be clever about. So...yeah. That was hot.

And for the frightening thing. Apparently there's some racecar thing happening in Indianapolis next weekend and everyone's got this pandemic race-fever BS. Well, we saw this as we were leaving. 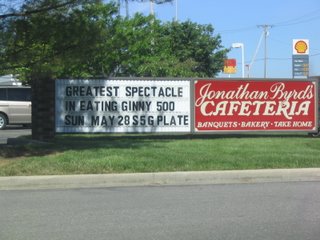 Folks...no matter how you read this (five-thousand dollars/plate or a five-thousand dollar plate or a five dollar G Plate-which what the heck is a G-Plate?), it's still creepy. Just what could merit such a prize (or entry fee)?? And why, if the restaurant is called Jonathan Byrd's Cafeteria, is it the "Eating Ginny 500?" So many unanswered questions. And we wanted to get home, so I didn't take the time to go find out. Which, in retrospect was probably a good thing. That way, I can just tell myself that it's not possibly as bad as I'd imagined (instead of actually knowing that it was).

Ginny Byrd is Jonathan Byrd's wife or mom. The Ginny Plate is their "value meal" at the cafeteria, and it's usually $6.49. They are having a $5 Ginny Plate special next Sunday, in honor of that little 500 mile race we have over here.

Oh. Somehow that's not as cool. But at least now we know. Thanks!

That hat is awesome yo!

And for the Ginny 500, I was thinking that it was some kinda buffet extraveganza where they had to eat their way around the buffet the fastest. A competitive buffet speed eating competition. Bring out Kobayashi, Sonya Thomas, Cookie Jarvis and Badlands Booker! Bring out the whole IFOCE !!!

Exactly! Lowering the cost of a plate by $1.5 does not qualify as an 'extravaganza' in my mind. I would think that it would be some kind of competitive eating thing, too. The reality just isn't as cool as it is in our minds.

But the hat....the hat is WAY cooler than I could have imagined! :-)