Is There a Doctor In the House?

Yes. Yes there is.
Two of them to be precise.

I'm sad to say I failed the reader quest. I found no Ronco item (although the Rotator potato peeler thing was probably close) and no New Kids on the Block (although, to be completely fair, I only partially glanced at the tapes).

And I don't have pictures. Tonight was a mission-kind of night. I needed to pick up some new shirts and some new jeans (smaller shirts and jeans :-)

So, I really didn't go in to take pix tonight. And it's all good.

But the steal was $5 for the other pair of shoes I got.

Yes. You read that right. Doc Martens for $5.

Nancy got a kick ass pair of Naturalizer black pumps for $3.00.

I know I'm letting y'all down on the thrift front (and I promise when things slow down a bit, I'll post the pix from the last jaunt).

I know I promised to get the other thrift store post back (but that's a LOT of pictures to load again)...
Anyway...I just wanted to drop this little teaser in-
Tomorrow is 1/2 Price Day at the ThriftStore!!!!
On the hunt list we have:
And maybe (I'm not making any promises) the missing thrift post with pictures, and not just my witty remarks will make it back up on the site.
Peace Out!
at June 27, 2006 2 comments:

OK. I had a great post (At least I think it was pretty cool).

So, I loaded the pix over to my website and put a link in the actual post to the pictures.

This caused it to blow chunks. It had to load 40 pix (that were about 1MB each).

So, sorry about that folks. I'm taking this post offline for now until I get it cleared up (and the pictures loaded up to Blogger).

I'll try to get it back up this weekend.

A Little Something To Tie You Over

OK. I know I have been INCREDIBLY tardy with the thriftstore posts (And there are digital pictures at home waiting to be posted from last night's trip), but here's a little something to keep you amused until I get them posted. 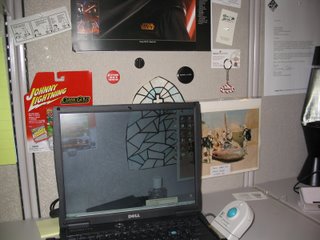 I LOVE the new Windows XP Transparent Desktop plug-in!!
(no photoshop involved in this).

But, alas, I cannot take credit for the idea...I found it on BoingBoing.net and the original flikr album is here

What I Was So Busy With

So, my nephew graduated high school (which makes me feel OLD. OK, not really, but isn't that what you say when people that you knew from infancy reach major life milestones?) So, yeah. He graduated and my sis-in-law wanted me to put together a video for him.

I got the photo scans and video clips to edit 4 days before she needed the video. Yes. Four days. Now, I'm used to putting things off, so I don't mind the rush of trying to get something done in the last minute, but normally I'M the one that likes to procrastinate (and I build in my own deadlines accordingly). But anyway...the video when off without a hitch. Everyone loved it and like the broke-bastard that I am, that became my graduation gift (he'll appreciate it when he's older).

And along about that same time, I was asked to do a promo-video (a 'commercial' if you will) for a church retreat for Hyde Park Methodist Church in Cincinatti. I don't know anything about the church, but the reverend leading it used to pastor at my church. So...I said "sure."

Part of my shot list was a sunrise over the water. And since I live near a resevoir, I thought it'd be a pretty simple shot.

And it was. Simple...and so freakin' amazing (I think I goo'd over it in a previous post, so I won't rehash that), but damn. It was sweet. I'm gonna render and make a DVD just of that to throw in when I think I'm too important and life gets in the way of me being mister bigshot. It's a pretty humbling reminder that you can't even begin to touch the awesomeness of God (or the universe, or KISS or whatever deity or non-deity you pray to). People are so small next to that.

So..the retreat promo. I think it came out OK. It's short, sweet, and to the point. Brenda's seen it (the one leading the retreat) and really liked it. And since she's the one that commissioned it, if she's happy, I'm happy.

You can take a look at it here if you want. Retreat Video

Nancy and Tommy are in Chicago. And Jen and I are going to West (by God) Virginia tomorrow for a family reunion. It should be...eh..interesting (and probably fun, even if there isn't any beer).

Sunday Jen and I are hitting the Science of Star Wars exhibit at COSI. Gee, I wonder where my daughter gets it from?

Alright, gotta be on the road fairly early tomorrow, so I'm gonna sign off now.

So a couple weeks back we were flipping up near one of the MTV's that actually still show videos and saw this frenetic, twisted bizarre video. And we were hooked. We had to see who it was.
Turns out it was Panic!At The Disco. The song was "I Write Sins Not Tragedies." I don't know why but I dug it.

I found the disc the other day and picked it up. I just listened to the whole thing today without any interruptions or distraction and all I can say is...dooooooooood.

It's definitely not for kiddies. It's just very well put together, and the singer is very engaging. It's just a cool frickin' album. I don't know enough about the other "THE -ES" bands (THE Bravery, the HivES, the white stripES, etc) to tell you if it's derivative of those acts or not, but I can say...it's a rockin' album and I'm sure I'm gonna give it many many more listens.

On another note, the new Pink album is pretty phenomenal, too.

This post will likely be rushed. I’d apologize, but at this point, the quirkiness is more than likely something you have come to expect fro...