Blogger just ate the 60 pictures and witty comments I had just spent the past two hours posting.

Blogger's freakin' out on picture uploads tonight so look for the thriftstore post sometime tomorrow. It's coming, I swear!
at July 26, 2006 1 comment:

Holy crap! Has it really been 2 weeks since I've updated this? Oh mylanta. Well, I know this won't satisfy the ThriftPost jones (but hopefully I'll take care of that this Weds w/half-price thrift store day).

First off, I'd like to congratulate Darrin and Maryann on the birth of their baby girl, Norah Elizabeth, who decided to come into the world this past Friday.

To Darrin and Maryann--you guys are the greatest and Norah is lucky to have you as parents!! (and when you're ready for a night out, let us know, we'll babysit).

The second major update is news that the TwistedZen website has gone through a MAJOR overhaul. Go ahead, check it out, I'll wait. Who knew my ISP had such cool web design tools? Well, I mean, I do. Now.

And in other video news, I finally finished this year's installment of the Dylan Birthday Video Project (I can't tell you the name yet, because it's a surprise).

I've got some other family videos to work on before the fall soccer season starts.

OK. So, it's not really that MEGA of an update.

But hopefully it'll keep you coming back, at least after Wednesday. 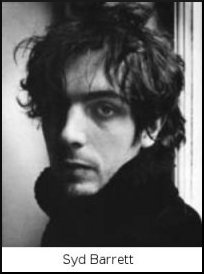 Got news today that Syd passed. I call him Syd, like we're old friends. We're not, but I would have liked it.
If you don't know who Syd Barrett was, go ahead and google it. I'll wait. Back? Cool.

He founded The Pink Floyd back in the 60's.

The Floyd remains to this day one of the only major groups that I claim as a musical influence that I have not seen live. All the others I have seen at least once (with the exception of Dylan and Springsteen, and I'm working on that). There are 3 major reasons (2 rationalizations, 1 real) for that. Reasons 1 &2: Syd Barrett and Roger Waters are no longer part of The Pink Floyd. Reason #3 (the real reason), my mom wouldn't let me go when they played the shoe at OSU.

But I still dig 'em. All the iterations of the band (I count 4 distinct lineups, but I could be wrong). I even groove off of most of the solo shite that's come out from the various Floyds. Syd's was weird. Gilmour's mellow. Waters' moody. And that's ok. You can tell with each phase of Floyd which one was at the helm. Which is pretty cool to me.

I admired Syd's way(the heck)-out there take on things and the Floyd's first album is still amazing to me everytime I drop the needle. It's SO night and day from Dark Side of the Moon (which is arguably their most known album). It's not the same band. And that's a good thing. And it's a good album.

You should track it down and go and listen to it. I'll wait. Back? Cool.

Not much of a eulogy, I know. Then again, it wasn't meant to be. More of a random stream of conciousness about the loss of a true creative genius that burned a little too brightly too quickly.

Andwe weren't really friends, but I think I can say with a fair degree of certainty, that the Piper is finally at the gates of dawn.
at July 11, 2006 2 comments:

This really is just a quick, "hi, how are ya" kind of post.

First things first. I'd like to give a big shout out to my homeys over at Devilcake for rocking it foodcore yet again. With all the craziness this summer I hope to get out and see them before the band goes on another hiatus of undefined duration. I missed their last iteration when Darrin was still banging the skins. I actually haven't heard any of the new stuff (or re-working on the old stuff). Thank god they have a MySpace* page that I can check out. So, word.

Now on to some sad news. With only 6 posts or something completely lame like that, the TZPPhoto blog is the weakest link. Goodbye.

*Speaking of MySpace. I had a page up a while back on M(urdoch's)ySpace, but took it down because I wasn't really that keen on the idea of NewsCorp (the same fine folks that bring us the fair and balanced FoxNews) trolling the collective database to see how best to market to us. So I closed the page (and apparently someone else was just waiting to snatch up the name 'twistedzen' for their MySpace page--so I lost that when I signed back up. Yes. I'm a big wussy. Everyone's got a MySpace page, and dammit, I just want to be one of the cool kids. Please, don't bother looking for it yet (or ever). It's not really even set up beyond the tripe they make you fill out as you register for (being part of their marketing database and demographics studies) for free. I think I might have screwed up their analysis, though. I put that I was a water carrier from Zimbabwe who liked to listen to Elvis records and collect Pervis Ellison trading cards in her spare time.

Nothing new on the film front. I finally got paid for the retreat video promo I did in May. And my harddrive is currently 75% consumed with footage from Dylan's 13th Birthday Party that I'm trying (not very hard) to edit before Aug. 12th.

Rumor has it that the highschool approved my proposal for filming the varsity soccer team again this year(16 games + a highlight film). And since it's going through the school this time, they'll either pay me the full amount up front or 1/2 in August, 1/2 in September. Either way it will pay some bills, buy the gas and pay for some hardware upgrades. Yes. It's videography. And yes, somewhere a ways back I made it very clear that I was a filmmaker and not a videographer. Turns out that I'm a filmmaker when I have money and a videographer when I need money. Works for me.

And I haven't been thrifting in several weeks now (sorry about that). I still have the pictures from the trip before last that I keep promising to post, but in all honesty, it's much more likely that I'm gonna go again this week, take fresh pix and post those. I'll put the other ones on the back burner to post and pass off as fresh some other time.

That's all I got for now.