Copyright Terrorism, CNN Drops the Ball, and a New Feature

Settle down. Not THAT kind of terrorist. According to CNN, I may be what's called a "Copyright Terrorist" (although, I have to admit, if I am, I'm not a very good one). 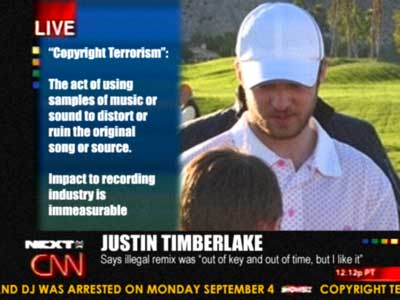 See, it goes like this. A DJ in Oregon spins a set. Then heads outside and gets arrested (apparently by like 9 or 10 cops....HEY--those turntables have NEEDLES!!! Mace was NOT excessive!)

And now he's still in jail. Apparently it took 2 days to actually tell him the charges he was being held on. Check out the full story here.

Now, whether or not you agree with mashups as art or not there are a few MAJOR areas of concern.

First of all, who the hell determines that a mashup "ruins" the original song? It's my understanding that remixing is not a crime. The club that he was playing the songs in pays their dues to ASCAP or BMI (presumably) for performance royalties, so both artists (in this case Rod Stewart and Justin Timberlake) should have gotten their 3 cents for the tracks being played (who cares that they were played at the same time??).

If you read the CNN graphic that's posted here, you'll understand what's gotten me worried about this.

First off, the use of the word "terrorism."

Terrorism is defined as the systematic use of terror especially as a means of coercion. Terror is defined as violent or destructive acts (as bombing) committed by groups in order to intimidate a population or government into granting their demands
at September 11, 2006

Exactly.
When I heard about it, I was stunned.

yeah... that's just dumb. terrorism is, imo, not a word you should just throw around. and css is a bunch of dorks. they've proven that time and again. though, i'm sure that fox news uses that term about ever other day as well. they both have their issues. course, in general, i just don't watch the news. if they made an effort to make the news more happy then i'd probably watch more. and they wonder why things are more violent than ever. f' blaming GTA games and whatnot. the number of people playing GTA pales in comparison to the number of people who watch any of the 50 television series that feature people killing (and people solving killings) every day... on some networks in 3 hour chucnks at a time. but, i digress.

mashups are not against the law, as far as i can tell. rollerrinks and dance halls have been playing music for years and years. maybe if they put out some music that was worth listening to for more than a grant toatl of 15 minutes, then maybe CD sales would go up a little. I think it's been proven that if a 'worthy' CD comes out, it can actually move units. is piracy and downloading an issue? hell yeah. i'm not denying that. but work with the system instead of suing grandmas without computers and fighting 'terroristic DJs' who are remixing two songs that probably sucked in the first place.

ummm... words. this concludes my about-once-a-year-rant-on-a-blog. thank you. sorry for sidetracking all over the place.

right on about the hymns and nursery rhymes. Slow news day.