Alright, here's the scoop. Today IS half-price day at the OhioThrift. It is also my daughter's choir concert (and she's got solos). So needless to say, there won't be any thrifting tomorrow.

But never fear, I won't leave you hanging. What follows is the other half of the pictures I took last Saturday with the old Kodak DC120. Complete with my witty er..um...witticisms.


So you wanna be a player...but your wheels ain't fly? Hells yeah. Again, if I was oh...a midget, I'd fit in to this shirt. Dammit MTV for only putting out cool shirts in size M. 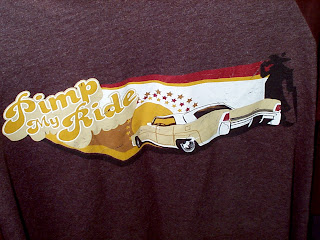 This is an ugly shirt. No really. Look at the label. 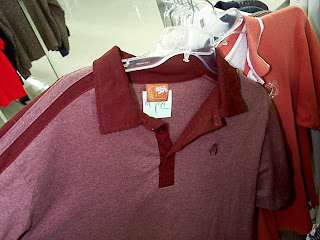 So...I wonder what in the world would lead to this shirt winding up in the thrift store. There has to be some sad story about a conservative getting jaded or suddenly discovering that Al Franken makes a lot of sense. Or it could just be one of those thrift store flukes. 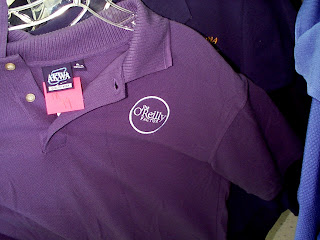 If you think this shirt found its way in to my cart just because it was XXL...and has a kick ass embroidered Colonel on it...then you are right!! 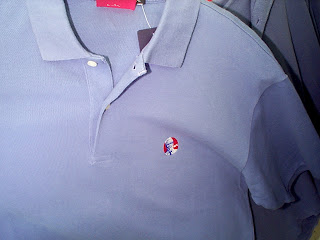 I kind of dislike the t-shirts where a logo is taken and made into some pot reference. What's worse is when a city does it. Although, to be fair...this logo was already 1/2-way there. 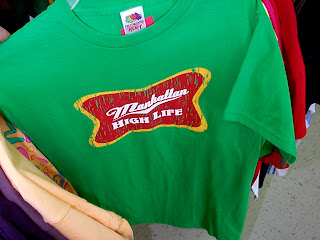 Sometimes the simplest truths can be found on t-shirts. And no truth is more self-evident than the need to guard your grill. Or UR grill, as the case may be. 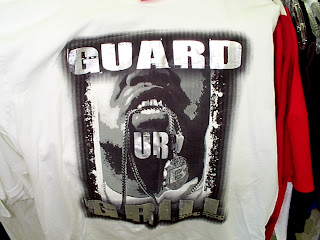 GEE! I wish I had ....a joke to go with this shirt. Although I'm sure that there are plenty to be had with the whole flute/man thing...or man-flute thing... Once...there was this time...at band camp... 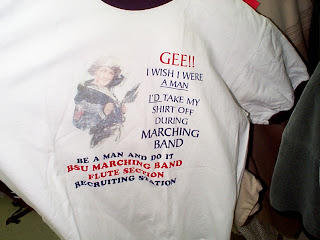 That's right smokers....stand up and fight for your right to pollute everyone around you. Oh sure...you're right...it IS your right to pollute your own lungs with cancer-sticks. And I have no problem with that. AS LONG AS....none of your smoke comes near me. If I can smell it, you're not doing it right. Keep all that smoke to yourself. Freedom. Um. Sure. As long as your freedom doesn't pollute my air.

Ah s'Oh. Your dragon style is strong but my tiger style will defeat you! And yes...this is now mine. The treasure of the shao-lin as brought to you by Old Navy. 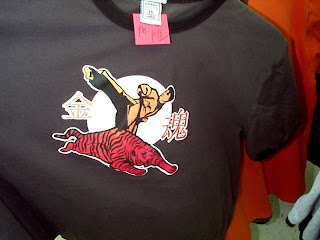 Here you go....21 years of loyal service and we're gonna give you....a shirt. Congratulations. Now get back to work. 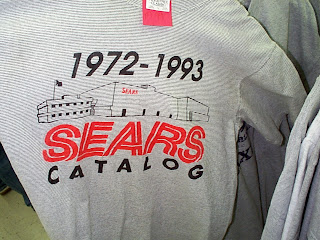 Celine Dion...um. No. If you look closely you can just about make out the part where she signed the pact with the dark Lord. It's hard to see...but when you've been tracking hellspawn as long as we have, you learn the signs of the pending apocolypse. And trust me...she's a harbinger of doom. 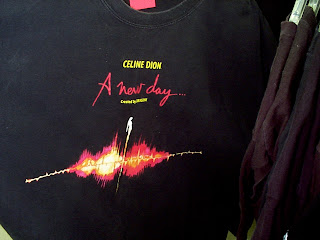 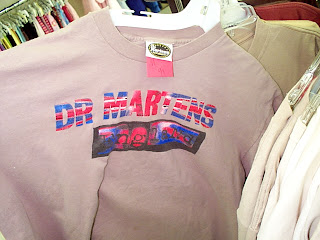 I will readily admit that I don't get "Napoleon Dynamite." Fans have told me that it requires multiple viewings to get it. I'm sorry, I can't buy that it's so very multi-layered that its humorific nuances need time to ferment. Either the shit's funny or it isn't. Tommy thinks it's hilarious. So I got the shirt for him. 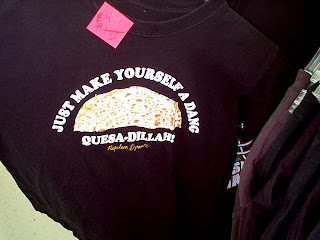 Right, because nothing says 'Class' like having the word 'ass' on your t-shirt. 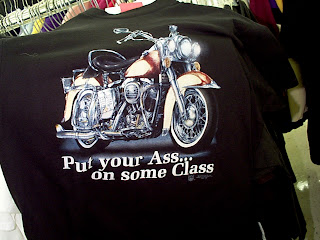 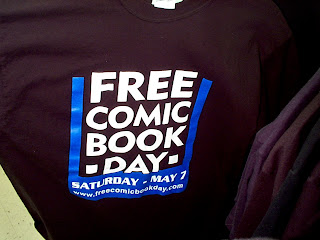 You too can look like a slut. WonderBra sold separately. 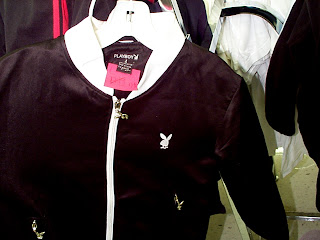 This is the epitome of a Steelers fan. If there weren't empty cans of IronCity or Hamms lying around when this was done, I'll be very very surprised. 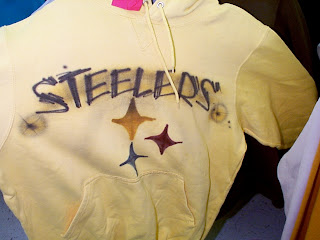 What a joke. These guys don't do anything in 72 hours. Let alone listen to what someone would tell them after only thinking about it for 72 hours. I almost got this for nostalgia. So that I could pull it out of mothballs in 50 years and go "man...what the f**k were we thinking when we elected that sh*thead....twice!?!" (*EDIT* What you can't see on this picture is that below the logo it says "72 Hour (something or other)"...Not that it makes the election any funnier). 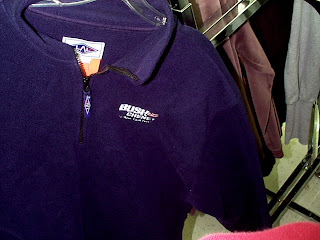 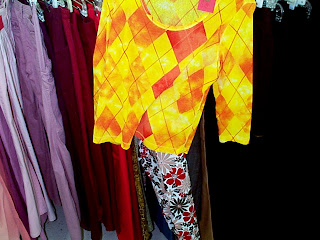 Um. Yeah. Good luck with that. I think this is actually some loosely veiled christian values book...which is funny because...there were no dinosaurs in the bible. I could be wrong about that (well, any part of that, actually, but ignorance is bliss and I am one happy mo'fo). 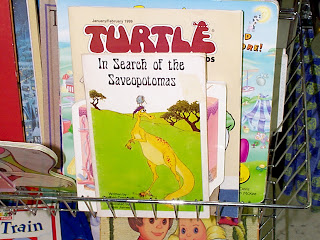 This has some Jo-Ann Fabrics on crack UV Sensitive paint on it. But it's a kids rocking chair (see, it even says "chair"). Ahh, hippy parents....gotta love 'em. 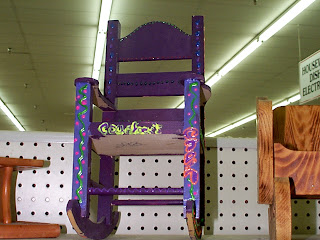 Um...no reason given for this. Maybe they make greater lovers because of their unwavering....um insurance co-pay that lets them buy little blue pills. But of course that wouldn't be as funny on the plaque, now would it? No. Better to just let you speculate why they make better lovers. 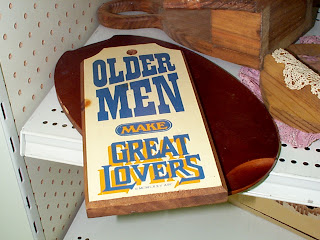 And with that, I leave you. I'm going to get back to work now. If you notice the pattern of events here, you may actually pick up that these pictures were taken prior to the other posts pictures. And you would be correct. But going on D's suggestion I decided to break them up into separate posts. And I have to say...Blogger behaved much more civily when I did that. Not to mention you actually get another post!! Everybody wins!!

Alright. Peace out. It's gonna probably be a week or so until another Thrift post (although there may be random posts meanwhile). Jen's got her solo tonight at the concert, so that takes priority.

I wanted the turtle book behind the other book you were looking at! :)

Alright.I've got my shopping list. Band Camp shirts, Turtles...anything else? :-)

I'm glad the "Older Men Make Great Lovers" is in big type so all the geriatrics can easily read it.