I know this seems contradictory in many ways.
First of all, let me cleanse your mental palate. I know that many of you are thinking of Oscar Mayer when I say 'bologna.' And you'd be correct. They make bologna (pronounced 'baloney' for those of you outside of Ohio). That's like saying that Yugo makes cars. Yes, they do. But if I tell you that I've just driven the world's best car, you would not think of a Yugo. You'd think of a Ferrari...or an Astin-Martin.

That's what this sandwhich was like. The freakin' Ferrari of bologna sandwiches.

And it's in the most unlikely of places.

Seems that back in 1962 the fine folks at the G&R hit upon the secret to bologna nirvana. And they've been doing it ever since.

They defy the laws of nature.

There will be a roadtrip movie to come out of this. I took the still camera (so the audio will probably be crappy), but you get the idea.

And one I hope to repeat soon. 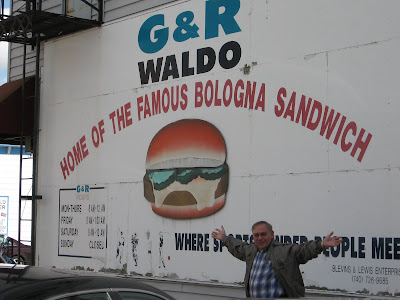 Sweet! Just looking at the picture, I'm sure it just wasn't 2 slices of bologna. It appears to be a big honking 1/2 slab of bologna. ANd right now, even at 8:30 in the morning, that sounds goooood.

it's a definite road trip must!

This has nothing to do with bologna, but I'm at work and my brain is frating on both your work and how email addy... derr.... anyhoo.... Marty DiBergi has a new Spinal Tap short out promoting Live Earth. Check it out!!!

I haven't had bologna since I was in high school...but now you've got me curious...

...where exactly is Waldo again?

Take Rt. 23 North from Columbus. It's about 20 or so miles north of Delaware where route 4 and 98 cross 23. Theres a BP station there, and you'll see one of the Grohl's Furniture warehouses from the freeway.

Exit off of 23. Turn Left. Then Left again. Go straight. You'll run right in to the G&R. It's a great Saturday roadtrip. And followed up with a huge-ass icecream cone from the Waldo Dairy Bar. You can't go wrong!!

I'm eating a bologna sandwich right now (outside of boston) and I thought to myself- I waonder where yhe best bologna is- now I know.

I love finding diamond in the rough places like thisd

Adam-yeah. it was awesome. If you're in Ohio, I highly recommend it.In fact, you reminded me of this post and I had to go to the deli and get 1/2" sliced bologna...mmmm. I think I need to make another road trip.

LOL! I am eating a bologna sandwich right now too and wondered..."Who makes the best bologna out there"

I love this blog! Too bad I am not in Ohio!