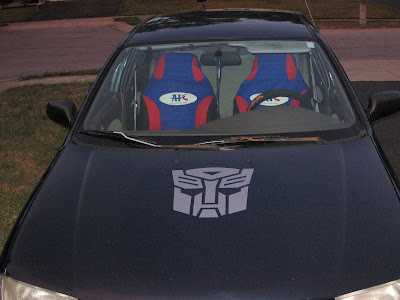 Far be it from me to say that I'm going to soon post some more thrifty goodness...but I am. This coming Wednesday is the last Weds of the month and that can only mean one thing....1/2 price thriftin'!

But before I can go into that, I need to clear one thing up.

I'm a geek. Yes. It's true. No, I've got no plans to get into any 12 step program to get acclimated back to a society that doesn't know RISC from CISC. I have no problem with my geekiness.

That being said-this is indeed a geeky post. You've been warned.

I recently caught my wife and a friend off guard by saying that I liked the Transformers movie that just came out better than Star Wars. If you know me or have ever been to my house, you will see the shock value of this statement. I have a wall in my office area that is pretty much all Star Wars shit. From a stuffed Wicket to action figures (re-issues) to a framed piece that has a 35mm cell from each of the six movies.

So for me to say that I like something more than StarWars is a pretty big f***ing deal.

And now I'll tell you why.

When I saw Star Wars for the first time, I was a kid. When I saw the Transformers movie, I felt like a kid again. Subtle but oh so key difference.

If I watch Star Wars now, I watch it as an adult. I think about things like "what kind of benefits package did stormtroopers get?" or "how did they all keep their teeth so white?" or "how did Ben age 30 years in the same time that Luke only aged 17?"

When I watched Transformers (each of the 4 times I've seen it so far)...all I thought was..."I can't wait for them to TRANSFORM!!! WOOOOOOOHOOOO!!!!!"
See the difference? Watching StarWars now does not take me back to being a kid and seeing it for the first time. I can't remember anything about the first time I saw Star Wars. Any of them actually. But 20 years from now I'm pretty sure I can tell you about each of the times I saw Transformers.

It made going to the movies fun. It made me remember what it was like to come home from school and play with my Transformers and watching the Transformers cartoons on TV. And yes, I am well aware that they were just animated commercials for the toys. The toys came first. As an adult (just as when I was a kid...)I don't care. They're fun. It's a truck...it's a robot...it's a pistol...it's a robot....it's a walkman...it's a robot. They rule!!

10. Special Effects. Sure, I know that 30 years separate the two movies, but it's not even that. It's that the FX fit into the Transformers movie....whereas in the Star Wars movies, sometimes it seemed a bit showy (esp. in the prequels).

09. Better Reluctant Hero-type. Dude. C'mon. Shia Labouf vs. Mark Hammil? I was rooting for Sam in Transformers. I wanted him to get the girl. I wanted him to kick butt. All I wanted to happen to Luke was that he would step in some taun taun dung and stop whining.

08. The Toys Came First. The major achievement that George Lucas is known for with Star Wars is not that he created this amazing universe that sucked generations of nerds into believing they could make someone choke by squinting really hard and making a fist...no...his legacy with the Star Wars movies was that he introduced the concepts of Blockbuster....Movie Franchise...and product tie-ins. With Transformers, the toys came first. Why were so many killed in the animated 1986 movie? Because Hasbro had some new Transformers they wanted to sell. We all knew the toys came first. This frees us up to enjoy the movie (because we've already played with the toys).

07. Michael Bay Didn't want to Disappoint the Fans. Michael Bay clearly admits that he didn't know squat about Transformers when he was asked to direct. So what did he do? He went out and bought every piece of Transformers merch he could come up with and became a student. He said he didn't want to do it if he couldn't do it justice. And George? Two words. Jar Jar.

05. Tasteful Revision. Instead of leaving his 1977 cut alone, Lucas decided in the 80's to revise the movies. To make some changes...to 'finish it the way he wanted it,' if you will. And since he had the money to do that, he did. And he pissed off a lot of people in the process (*cough* Han Shot First *cough*). Things were changed in the Transformers movie from the original cartoon (characters weren't the same vehicles...Megatron wasn't a gun in this one)...and while it bugged me a lot....it stopped bugging me as soon as I saw the first vehicle transform on the screen. From that point on, it didn't matter. I was in. Strapped in for the ride. The cartoons and toys were just roadmaps leading up to seeing a live action version of one of my favorite cartoons (and certainly my favorite toys) as a child. And I seriously doubt Bay will look back in 10 years and want to remake it because he didnt' get to make it his way. And I'm sure he's not going to take the part out where Prime slices Bonecrusher's head off with his sword. Han killing in self-defense my ass.

Fact is, for me I will talk about Transformers the way a lot of geeks talk about Star Wars....'i can remember when it came out...I saw it umpteen times'

But you know what's even cooler about it for me? I can take my daughter and stepson to it and they like it just as much. And they want to see it again and again. And we all have fun letting ourselves go and watching the world transform with child-like amazement.