A random cloud pick to start the day. Taken 13 Oct 07 at Cooper Park. 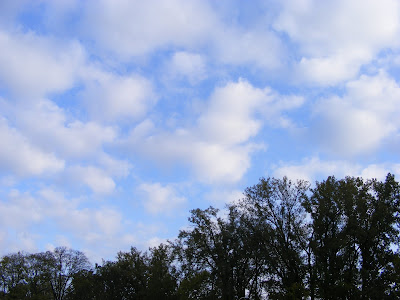 So...this is kind of funny.


I was uber jazzed about getting the Mac, right? Yeah. I was. I tried to play it down, but I was stoked.

And so, I popped it open to see if maybe I could put more RAM in it. And as I was in there (and marveling about how it looked like a Windows box on the inside, this little thing hit my hand and dropped the bottom of the case. I didn't think much of it and closed it all up and fired it up.

Hmm. Reckon if that little thing was important? Turns out it was a vital piece on the video card. I yanked out the video card. Hmm. An ATI. I have an ATI. And it's AGP. Put it in. Nothing. Apparently the hardware is a TAD different from Intel afterall. So I tried my hand at soldering. And it worked. For a couple of hours.

Now it's just toast. Needs a new video card. And I'm not looking to drop $200 on one right now. Besides I'm waiting to see what shakes down with the work I'm doing for Dad's company. If that goes well, he may buy the card, or a new computer. Either way it's win-win. I do work for him, he pays for the hardware. Everyone's happy. :-)

Here's a shot of my work area with the Mac in place. Not much has changed now, but the mac and monitor are off the desk and the laptop and second PC monitor are back on the desk. And I kind of like them better there (part of me hopes that Dad opts for the buying new gear option so I can get a MacBook Pro). 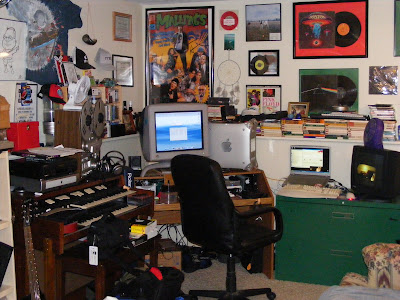 And oh yeah, on the Work-Tip. Things are going well. But they moved me in to a cube. It's a bit smaller than my previous digs, but it's ok. I'm a little more secluded now, but i'm not sure if that's a good thing or not yet. 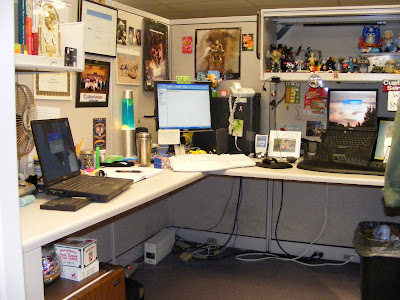 Hmm. There's a certain kind of symmetry between the two. That's got to say something (c'mon all you PSY101 grads....thoughts?).

Not much else is going on. I'm working on a gig to make some corporate training videos, so that's kind of cool.

W00t! 10 more minutes until my Ubuntu is done downloading. OK OK. So I came late to the Linux party...but I brought the chip dip...that's got to count for something at least, right?

And we have a final reminder from Sammy....sometimes you gotta work at things to get to the sweet spot! 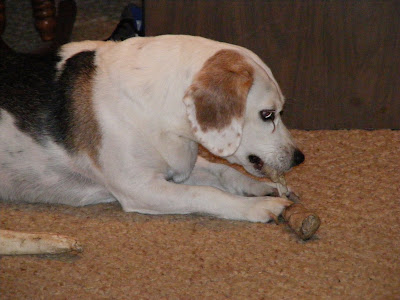 It's all good. I did get to play with it for a few days. So, that was cool.