Semi-Pro and a Fistful of Quarters

I was home last week while the A/C guys came to try to fix the eternal leak (still not fixed, another visit is in the works next week). But it gave me some time to see the kind of stuff my dog does during the day. Apparently, he chills on the stairs. I snapped these pix of him.

It kinda looks like he's in prison, but I really liked the way the shadows played in this photo. Tommy looked at it and said 'wow...that looks like a professional photographer took it' ...which was a pretty cool compliment, I thought. I told him that I was semi-pro...and may one day go pro. 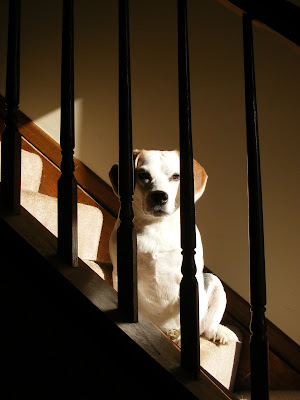 Sammy does this thing where his mouth wrinkles up and it looks like he's smiling. I held up the camera (just after the shot above) and his mouth was like it was in the above picture. As soon as he saw me with the camera, he busted in to the grin. It was pretty cool. 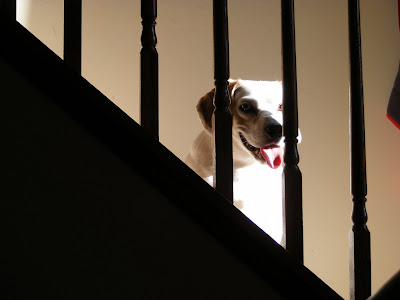 And for those of you wondering, Sammy is doing MUCH better. No more seizures. The meds have pretty much stabalized and he's not walking around like a stoner. He's back to his old self, howling when he wants in....greeting me with the little jumps up and the little whimpering to be petted. We're all very relieved and happy.

I've got more pix and some amusing anecdotes from this past weekend's Road Trip to Ky with Dad, but I'm at work and want to give that the time it deserves. I'll try to get it posted this weekend (along with Tommy's Soccer Game, Tommy's B-Day, Church, working on my parents computer, Recording Jen's new song (it's AWESOME!), and heading over to CJ's with the kids to play XBox 360 on his big-ass HD-TV.

I may get to it tonight, BUT...then again, maybe not. D-ski and I are going to see The King of Kong tonight. Since well, we're both old school video game nuts. And it's a movie about 2 dudes...one is the reigning champ of Donkey Kong for like 20 years or something (and apparently he hides it in his mullet) the other is a dude that's trying to de-throne him (and apparently he does....BUT...I guess that in a fit of dejection, Billy goes back and beats the world record again...by 1100 points....I smell a sequel).

Alright...get back to work! Slackers (and I include myself in that).