You Saw Me Standing Alone

As Halloween approaches I tend to look for 'the perfect, spooky moon.' It pretty much just involves a sufficient number of wispy clouds moving rapidly across the sky and obscuring the moon just after you've realized that it's full and you're out in the middle of a field, miles from anywhere and sh*t, Jack, what IS that noise?!

I posted some moon pix from the other night and here are a couple more from this past Friday after the missus and I returned from a Halloween party at Duane's. If you're lucky, I'll post pix of my costume as soon as Duane emails them to me. If you're really lucky-I won't.

Some more creepy moon shots. And while it's still fuzzy...I am still pretty impressed with how the S700 at least captured something distinguishable. The Canon would have pretty much had a white dot in a black blob. Score one for Fuji! 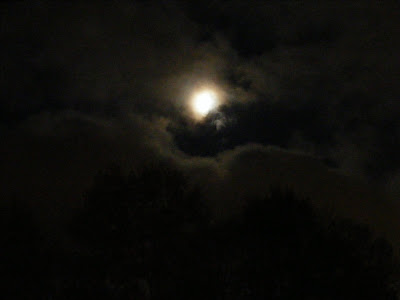 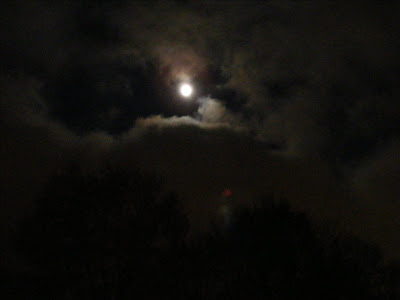 Also, I'm trying on something new over at TwistedZen.com. While the Flash site was nice and snazzy, it was somewhat restrictive in what I could and couldn't put on the pages. And since it was with their tool, I couldn't put graphics where I wanted to or anything like that. So I went back to HTML. Again, I used their WebBuilder tool (because really...who wants to re-invent the wheel*?), but I like the way it came out and it's going to be better for things like embedded videos and photos and the like. The other thing I did was get rid of all that 3rd person bullshit. It's my site. It's me talking. I wrote the pages as though I were talking to a fellow filmmaker or friend. Give it a peep and let me know what you think.

*"Re-invent the wheel" This phrase kind of bugs me. You can't really 're-invent' something. You can re-design it. But invention implies a certain bit of discovery that can't be made a second time. It's a one time only event. It's like Re-De-Flower the virgin maiden. Can't be done. That's about all the energy I have for a rant this morning. Have a Happy Monday.