Melt My Clock and Call Me Salvador

I'm not going to lie to you. I'm still jazzed about Rock and Roll Fantasy Camp (see the last post if you're confused).

But it's weird man...this whole week has been weird. Up until this past Monday, the biggest events of the summer that I was really looking forward to were the Indiana State Fair Fried/On A Stick Fest of Gluttony with Nash and going to the Peter Frampton concert.

Peter effin' Frampton (sorry...after High Fidelity I can no longer think of him as Peter Frampton...it's Peter 'effin' Frampton).

So, my friend J- does basically a buttload of all the graphic design work for the State Fair. And he's got the hookups. Only...getting tix for Frampton was his kryptonite. So I bought 2 tix and decided to gift one of them to Wayrho as a birthday present. J- drops the nugget that he can get us backstage after the show to meet Frampton, get autographs, pix, etc. Word. I can easily lay hands on one of the single greatest double albums of the 70's (that's Frampton Comes Alive, smartasses). And it would look oh so tastey framed with Pedro's John Hancock.

And that's the plan. The show was last night. We get there and have to turn right back around and come home to get the tickets because yours truly, Senor Dumass left them at home. Soooooo 25 minutes later we were back on the fairgrounds ready to see Frampton. Of course we had an hour and a half to wait. So we killed time...and by killed time I mean going through the worlds biggest freestanding candy 'store' I've ever seen and filling up a wicker basket with a bajillion different flavors of salt water taffy at 5.98/pound.

So in I walk with the saltwater taffy, my copy of Frampton Comes Alive on vinyl (look it up, it's what CDs looked like when I was growing up-Google it if you don't believe me). And it's just ...well, it's just cool.

We check out the merch table and see signed and unsigned versions of things (which doesn't bode well for our post-show automagraphing).

And after a few (dozen) pieces of salt-water taffy, he takes the stage. A mix of old and new.

And it was a great show. A really friggin' phenomenal show. And since recording devices were strictly prohibited (in the way that jaywalking is prohibited), I can't confirm that I might have a video clip of the 20 minute jam session that was 'Do You Feel Like We Do?'..but suffice to say it was insane.

I'm sitting there watching one of my guitar heroes who seemed so otherwordly to me growing up...like, oh man..I'll never get to see Frampton live...and there he is.

Sounding, dare I say, better than he did on the 34yr. album that was tucked away by my feet.
I almost cried when he did the first riffs through the talk box. I'm not even gonna lie to you. It was phenfreakin'nomenal.

Some pix for you. 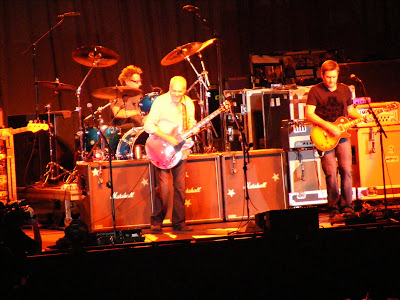 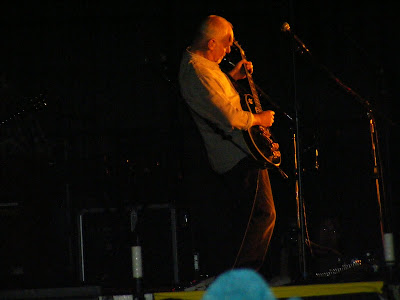 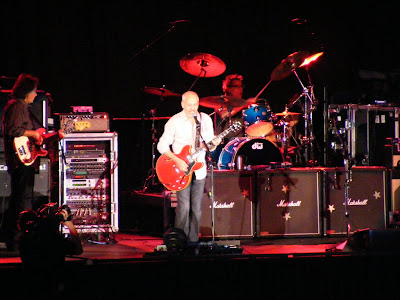 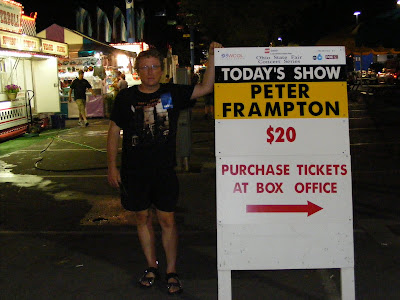 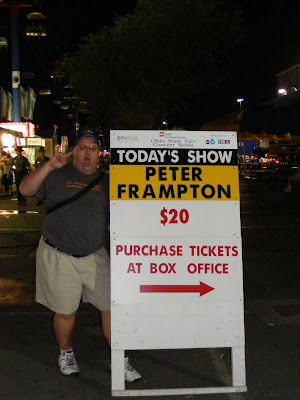 Yup. That last one is yours truly. Second to last is Wayrho...who got to meet one of his Guitar Heros (I, however, had to wait as there was only one backstage pass....I gave it up. Afterall, it was HIS birthday present...and in just a few short weeks, when I go to band camp, I'll be in the thick of all of that. And if the helpful hints from Zak are any indication, it's gonna be a wild ride. Wait...Zak...Wylde.....do you suppose? nah. That'd just be nuts :-)

Speaking of nuts...I guess the rule of thumb for this Rock and Roll Fantasy Camp is that pretty much any rock star can show up at pretty much any time. And I'd say that playing at the Hard Rock in Vegas and the House of Blues in LA would precipitate those conditions more than most.

Sh*t. I have to go practice. I don't want to look like a total noob when I have to audition in front of these pros!

yeha... we were at the fair last night. I think it was some country guy and some chick named candy(?). Um... we didn't venture in. But i did manage to get my favorite fair food of all time... the Giant Texas Pork Tenderloin with tons o pickles. It was tasty tasty.

Awesome that you got to see Peter Frampton. Sorry you didn't get a signature. Did you think about having Mayrho get a sig on the album?

Yeah. I gave Wayne the album to take back with him (along with requisite sharpie), but Pedro was having none of that. I figured, once I saw that he was SELLING things for more $ with his autograph, that he wouldn't be giving it up for free backstage. It's all good.

You know who has a good Pork Tenderloin? Fitzy's Diner on Shrock Rd. (by the Video Game Exchange). It's tasty!