So, one thing that this whole Rock and Roll Fantasy Camp contest/experience has done for me is renew my interest in music. Not that I ever really went away from it, but it just seemed like it was sidelined for a while.

In addition to the amazing trip (of which I've written much, and will probably write much more in the future), I also won the Epiphone Slash Signature Edition Les Paul (which is just an amazing guitar. And special thanks to Talo for setting it up for me on the tour so I can rock like a real rockstar (at least in my own head)). They also hooked me up with a $500 gift card from GuitarCenter (which definitely helped steer my head back toward music, if only for a little while). And Friday I used the last of the dough on the card. Here's the final list:

And that about wraps up the gift card. I got some of the stuff (stands, harmonica, CD, capo) the day I got the card in the mail. The rest of it I got when I got back into town (lucky me-GuitarCenter was having their huge labor day blow out sale, so it was easy to eat up the rest of the card).

What's kind of funny to me now is, I know that I want to make a little movie (well, more of a little video essay of 'what I did for my summer vacation, kind of thing)...and I know that I've got enough pix from the camp and just enough video clips to work in there that it could be cool (at least to me). But the other half of me wants to work on music stuff now, too. It's nutty. It's like I've seen what the very tip top of the mountain is like...and it was enough of a taste to know that no matter WHAT I'm working on, it's good. As long as it's good for my soul, it's good. Period.

I think the biggest takeaway that I got from the whole experience is that as long as I'm being creative...the medium doesn't really matter...it's the creativity that's the issue.

As long as that's happening, it's all good. I didn't see that anywhere in Fishof's literature. But it should be there. Something about how this whole thing allows you to tap back into that creative place in your soul that everyone has.

Peace and love, man. And I leave you with a shot of Sammy, Rock Beagle. 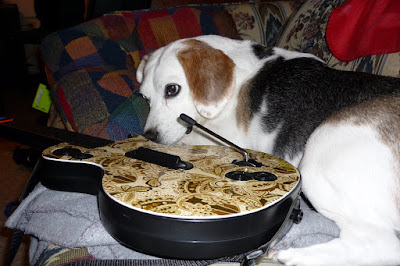 Dude! That Line6 looks sweet as all get out. I paid that much for my RP3, but I bet you that Line6 is about 10x as awesome. I think MCB whole thing is Line6 as well.