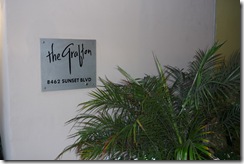 It hardly seems real. But it is. We drove through the night from San Francisco to LA and pulled up to the Grafton sometime in the wee hours of the morning.

In what can only be described by mere mortals as a 'whirlwind of amazingness' we unloaded.

I had to get a shot with Rob, our driver. The dude was a pro, lemme tell you. Not only did he put up with us whiny (faux)RockStars, but he got us where we needed to be and got us there in one piece. 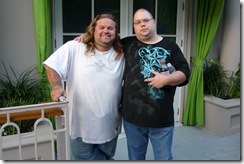 Here's another shot with Rob, me, and Rick, our tour manager. Rick took some time during his break managing the Alison Krauss/Robert Plant tour to manage the RRFC tour. I bet he's probably looking forward to getting back to them. But he was great, too. 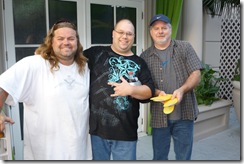 So, here we were. I was standing on the legendary Sunset. 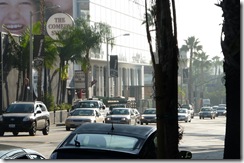 We walked in and this was the view that greeted me in the hallway. I mean it was like someone said, 'ok, when you think of some old-timey posh Hollywood hotel, what image comes to mind?' And >poof< there it was. 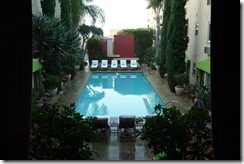 I can't say that I'd ever have a room in my house decorated like the hotel room, but it was...er....um...different? 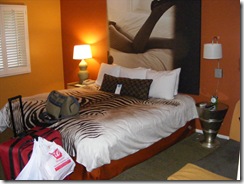 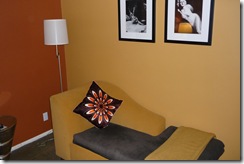 It definitely fit the 'image' of the place. And I'm sure it was a very nice place, it just seemed that 'Guido The Killer Pimp circa:1986' was a bit much as far as a motif. But, what the f do I know from design? I'm a helpdesk jockey pretending to be a rock star for a day (or 4).

We had enough time to clean up and get changed before heading over to camp. Today's camp was on the campus of UCLA. This shot was looking from the front of the hotel. 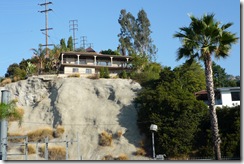 And this greeted us when we pulled on to campus. 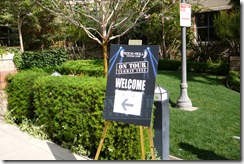 I was set to have Glenn Hughes again. And yes, San Francisco was AMAZING. Other than Mark Hudson, I don't think anyone works the crowd like Glenn does. It is truly a pleasure to be in his band.

But I was a leeeeeetle bummed that I had him again instead of a new counselor. Brooke was also in the band again in LA and I found out that we would be doing the same set that we had done in San Francisco. So...while a part of me was happy to have pressure of learning completely new songs removed...another part of me was bummed that somehow I wouldn't be getting the 'real' rock and roll fantasy camp experience.

So, I'm not going to lie. I was coasting a bit through the morning session. I was not as excited (not nearly) as I should have been.

This is where we rehearsed that day. See that center column....3rd floor? That was us. 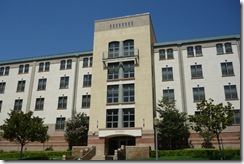 We broke for lunch. Everyone in the band had a pretty good handle on the songs. After lunch we got to hear a talk by Kenny Aronoff, drummer extraordinaire. 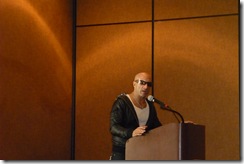 And as he was talking he said something that hit me. Damn near hit me right between the eyes. He said that the hardest thing to do is to PLAY LESS, but that you HAVE to play in such a way that you bring feeling to whatever song you're playing. And he applied it to the whole rhythm section (of which rhythm guitar is part). And that just stuck in my craw. I hadn't been playing with feeling at all that morning. 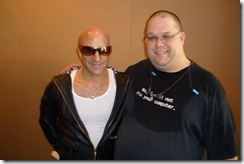 I got some additional autographs in my program and headed over to thank David Fishof for this whole thing before heading over to Master Class.

I was going to Mark Hudson's Master Class today on songwriting. We got in there and he starting talking about producing....and what comes first (the song)...second (the singer)....third (the rest of the band)....and what it means to get into comfort zones for songs and how artists will wind up giving you so much more in a performance if they trust you and feel that you have their best interest at heart. It was really an eye-opening session.

That coupled with Kenny's talk just had me thinking that I'd wasted my morning, but that it wasn't too late to salvage the afternoon. I mean-dude-this was the LAST CAMP. There was press all over the place. And celebrities were also taking the camp (no, I never met the kid from "Two and a Half Men"...I'd seen enough child TV star 'where are they now' things...the kid didn't need me bugging him. If I'd been in his band, that'd have been one thing).

So, I left the master class and headed back to rehearsal determined to enjoy the feck out of the rest of the day. And I have to honestly say, afternoon rehearsals went a LOT better for me. There was better flow and chemistry in the band. 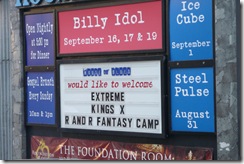 There were a couple of times that David was going to snatch me into an interview, but luckily Courtney found other victims :-)

Here I am with Mark Hudson. This guy is amazing and I sincerely hope that our paths cross again someday. He is truly one of the bright souls in our crazy world. 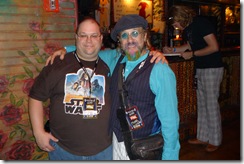 This is the man. Mr. David Fishof. The man that makes it possible for regular shmucks like me to actually have 15minutes in the spotlight and feel like an effin' rock star. Thank you from the bottom of my heart David. You have no idea what this whole experience(the contest, the camp, the tour) has meant to me (although I'm sure it will be echoed in this blog for weeks to come). 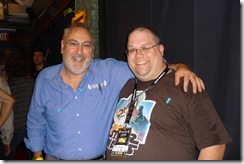 This is me and Samantha. She plays bass and she was one of the ones that talked me off the ledge when I called the Rock Camp offices. 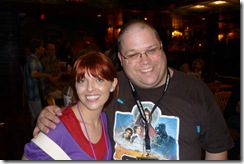 And here I am with Zak, the man. He called me the day I won and got me all signed up. Helluva guy. 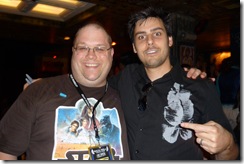 And here I am with Courtney. For as much shit as I talked, she really did make it all come together. And she did a really good job putting up with me :-) She was definitely one of the cool ones (Courtney, sorry I was such a pain in the ass). 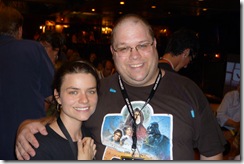 You say you want to see pix of Todd Rocking out at the House of Blues to a sold out crowd??

This is us getting set up with the intros by Mr. Hudson. 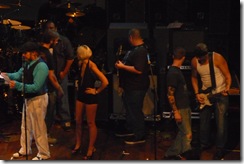 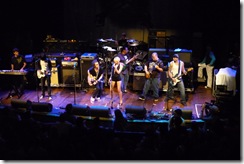 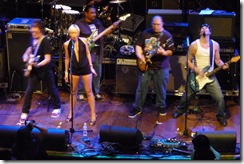 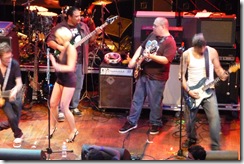 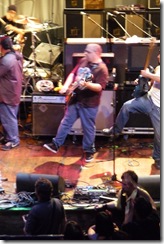 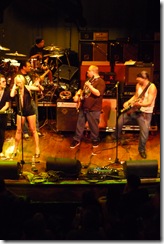 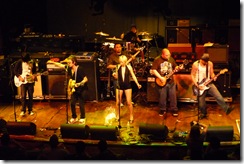 I still can't believe it. It seems that it happened a lifetime ago and a world away. But I will always have the nuggets that I gleaned from it buried deep within. And when I need to bring them out to brighten the day, I know right where to find them.

This won't be the last post about the camp, but it might be the last for a day or so while I let everything kind of sink in.

Thank you to everyone I met along this journey...you touched me in ways I can't explain, unique and special all and I carry love for all of you and wish you well in your lives and pray our paths will cross again. 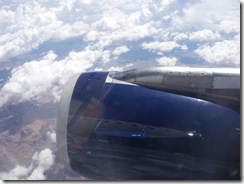 Glad you enjoyed your time on tour, bro. I'm glad your were able to see through some of the minor inconveniences and truly enjoy the experience. Keep on rockin'!!!

I'm sure I'll be posting more on the other entries, but wanted to get a shout out to ya to say 'Good jorb!!!'

BTW, picture P197 is frickin' awesome. Looks like you gots you a new desktop pic!