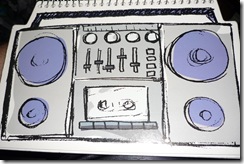 I am not a huge 'gimme your autograph' kind of guy. But even I recognized the potential for coolness to be had at the Rock and Roll Fantasy Camp.

I took an old sketchbook from the Rock and Roll Hall of Fame Museum and that became my Autograph Book.

I wanted to have a page for each of the bands I was in. And then, if I had time or the inclination to get the rest of the counselors throughout the tour, I could. And I got most of them, except Elliot Easton. My opportunity came in L.A. but his 13yr old daughter was at the camp and I really didn't want to be 'that guy' that kept budding in on his time with her when he was obviously trying to share a moment. So, I didn't get his. But I have the little vid clip of the Cars solo he did in his Master Class.

Extreme was the first real 'meet and greet' I've gone to. And since they were quite a bit higher up on the rock and roll food chain than I, I took the opportunity to get their signatures in Phoenix. 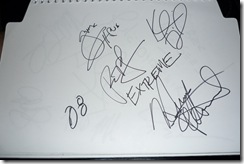 Speaking of Phoenix. The band was the HeebeeBeeGees. It was Dave Ellefson, Gilby Clarke, Me on gweetar, Mike T. also on guitar, and Nathan my guru on drums. And our Autograff page looked a little bit like this: (and according to Gilby, we rule Phoenix...)

From Phoenix it was on to Vegas. And since Gilby couldn't get enough of me, he had me in his next band, "No Name, No Fame." Apparently he saw something in my raw rhythm guitaring that he could mold. Sorry, had a 'Behind the Music' Moment there for a second. LOL. Here's what we lookied like in Vegas: 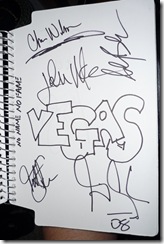 and while I would normally take credit for the block lettering of any city, I have to give that one up to Gilby. The man is a maniac with a Sharpie!

From Vegas we headed on over to the city by the Bay. That's right, none other than San Francisco where I had to part ways with Gilby and join a one mister Glenn Hughes of Deep Purple fame. My perpetual rock stiffy was not to be, however, as we decided NOT to play Smoke on the Water (sniff). It's OK. With a hot chick singer and another chick banging skins on drums, there was little way we could fail. And, as Brooke and the BallBusters....we rocked the f**k out of that town. Lemme tell you that right now, son.

It was here, too, that the autograph pages took a decidedly 'yearbookish' turn (and I'm perfectly OK with that)! 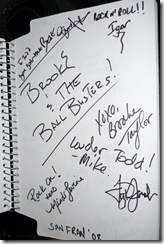 It was also in San Francisco that I got the super secret message/autograph from Glenn. I know that if I can just decipher it, I'll have the secret to the rock-god elixir that keeps him perpetually funky: 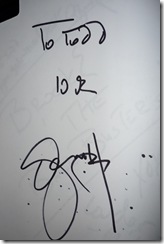 But that's a quest for another day. From the bay we went on to L.A. Where as luck would have it, I was again with the awesome Mr. Hughes. And Brooke, too, was in the band. It was like a weird Beatles/Wings moment, only with me not being on the same scale as anyone in EITHER of those two groups. It was in LA that Rodeo #5 (a play on Rodayoh Drive and Chanel Number 5 that came out sounding like "Roadie-Ho number five") much to the amusement of everyone (and I think even a few people in the audience chuckled, too). 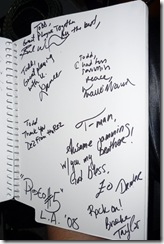 And that concludes the pages of the bands I was in. I have some other signatores from the counselors in their various guises for your amusement. 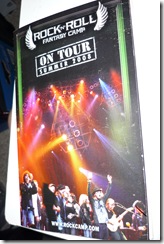 I just realized, I bugged Gilby THREE TIMES for an autograph. Duuuude. Not cool. No wonder he ditched me in San Francisco! And Elliot's was the only counselor I didn't  get to sign. Oh well...maybe...um...next time?? (yeah, don't worry...I'm not holding my breath...if my friend Nathan's band didn't win the trip to London for the smackdown that they gave everyone at the Fillmore, NO ONE should get it). 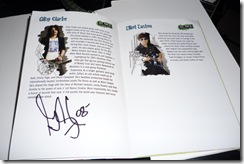 David Fishof is the MAN! Dude. I could have talked to him for hours about how much this has meant to me and I don't think he would have been any less thrilled to hear it. I wonder if he truly knows how deeply an opportunity like this has touched someone like me? Maybe I should write a short biopic mini-film about my time at camp and send it his way. Hmmmmm. Sounds like a plan. Mark Hudson is another one that I could just listen to for hours. And I think he'd still never run out of stories. Peace and love indeed, man. And...oh snap. I got FOUR Autographs from Glenn? Crap. I needed to reel that sh*t back a notch. But he was just so cool....and so....British that I couldn't help myself. And part of me can't help but think that if I ran in to him in Picadilly, he might  remember me. But that's really part of the rock and roll fantasy, isn't it? That we're on the same level as these guys...even if it's just for a day. 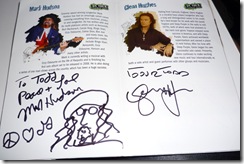 Chris Slade gave an awesome Master Class on drumming and was just generally an all around nice guy who really liked to have a pint after the show. But holy crap....when he's on the kit...lookout....he looks like a demon. It's effing brilliant! 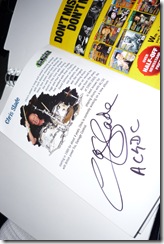 I didn't spend much time with Slaughter (as his dedication will attest) other than when our VIPBus broke down and we were on the RockGods bus for an hour while Slaughter and Hudson swapped Ozzy stories. And I have to say...he's one funny mother effer. He definitely gave Hudson a run for his money in the Ozzy impersonations. Well played! 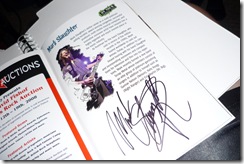 Earl Slick was another one that I didn't get to spend much time with, but that dude was just cool. I mean no one there pulled of the whole "I'm a f**king rock star vibe" any better than Slick (although Glenn was definitely a close second and by no means a slouch in that arena). As Earl was putting the stars on the page he said 'I have to add my doodles, man" Indeed. Doodle away Rock God, doodle away. 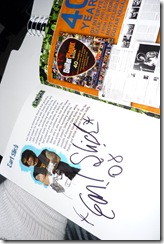 Kip, as head counselor, gave this vibe that he really cared about each and every camper in every city (or at least the 4 I was in) and damn, that had to be tiring. I didn't really spend more than 10 minutes with the guy the whole trip, but he was a really nice guy. 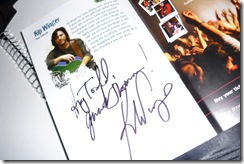 And that concludes the band and counselor portion of the autograph page. Now on to the 'other celebrity' portion.

First off we have a Mr. Kenny Aronoff. Drum Beast from the Isle of Awesome. His talk really helped me out going in to the afternoon session on the last day (when I was (can you believe this shit)...almost bored?? I know, right? WTF?). But after hearing him, and Mark Hudson, I hit the afternoon rehearsal with a renewed vigor and turned it around. 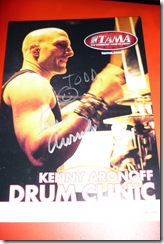 (I thought the smiley face was a particularly nice touch).

And, apparently there's this show on HBO (which we don't get) about a brothel in Nevada. And apparently our lead singer from San Fran, and L.A., Brooke Taylor, is the star of this show...and she's on some magazine that I haven't actually looked at since oh....college or sometime way long ago. So, yeah. She signed a card for all of us on the VIP Bus. I'm thinking of giving my card to my neighbor (who's also named Todd), since I didn't get him anything for his birthday. And he's a bow-hunter...so the inscription works (it's dual purpose...works for guitar player or bow-hunter). For the record, the wife thought that the gifting idea would be funny (and would thereby avoid any touchy conversations if the kids happened to find it). 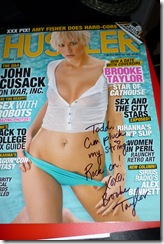 And that about does it for the autograph portion of the show. I DID happen to walk out of the Fillmore with one of their menus (don't worry it's a photo-copy...the REAL ones would have been much harder to gank). Wonder how that happened?? 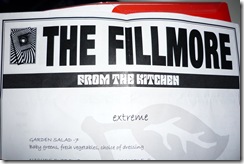