So, all prior bullshit and bitching aside. The actual experience of the Rock and Roll Fantasy Camps was amazing. David, you and your group did an AMAZING job of bringing this all together for a noob like me.

Righto. After pulling up my skirt and deciding to stick it out for a day or so, I finally get to the studio space in Phoenix that the camp is taking place at. It's Scottsdale Studios and it's an honest to gawd recording studio.

I was paired up with Dave Ellefson and Gilby Clarke.

Our drummer, Nathan, was another one of the dudes that was riding on the VIP Bus for the rest of the tour. And he was a freakin' madman. Dave or Gilby would just bust a couple measures of a song and bammo-Nathan was rockin' it on the kit. It was bitchin'.

Mike T. was a local lad there to get his rock on for the 1-day camp. (and a BIG huge thanks goes to Mike for driving me back to the hotel at lunch so I could get my phone and avoid the $50 cab fare). Mike was a killer axeman. He had this sweet Kramer kit (I think it was Kramer). And he knew his shit.

I make absolutely NO bones about the fact that I'm a rhythm guitar player (and not a spectacular one at that). But (Darrin, you were right) I WAS freaking out a bit (partially because of the shit that had happened in the prior 12 hours, but also) because I was feeling like I was WAY in over my head.

And you know what? Dave and Gilby were really effin' cool about it all. They knew (instantly) at about what level of playing I was on and they were both really cool and helped me figure out what I needed to be playing. It was funny, though,Gilby would show me something, and then be like...'ok...then it goes to A' (and I'd play something)...and he'd be like 'no, your other A.' And it was like like 'no, your other left hand, stupid,' but I didn't feel like shitty about it or anything, it was just more like a good-natured thing.

Luckily one of the songs we wound up doing was 'Paranoid.' I was fully prepared to rock on that.

The other two that we wound up doing weren't even on the list (anywhere), but they wound up actually being really easy for me to play. We wound up doing an abbreviated version of 'Won't Get Fooled Again' and an old AC/DC track 'Shot Down in Flames' which the chords were A-G-D-C (so it was REALLY easy for me to remember because I just kept thinking AC/DC (but putting a G in there instead).

And we were all tuned down 1/2 a step (and like a moron, I had to have help getting my shit in tune with the rest of the band. So Gilby did the honors.)

The highlight of the day (camp) part for me HAD to be when I pulled out the harmonica and we went into a 10min. blues jam (a song I should probably know, but don't, about getting a 'po boy and something something on 42nd street, but it was a jam).

(I'll be working on getting the videos posted in some kind of semblance of an order at some point in the next few weeks).

I didn't get as many pictures as I should have, but I'm happy with the pix I got and for me, they' really more to enhance the memories than to serve as points of recall. I doubt that I'll ever forget anything that happened on this trip, so really the pix are kind of secondary.

This pic is of me sitting in the airport on the way to Phoenix (the calm before the storm, you might say). I later ditched the itchyass goatee (Besides, Hudson wears his WAY better than I). 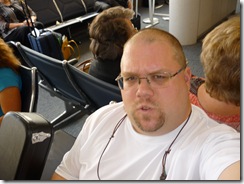 Here's a shot of the room they put me up in in Phoenix. It's some hoity-toity Hyatt spa thingie place. I'm sure if I made about 4 times what I make now, I'd be able to afford it on my own. 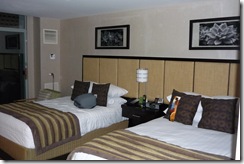 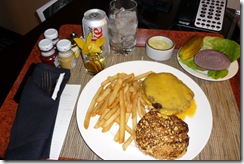 Some local photographer, the cameraman (don't remember his name) that was with us the whole tour, and Dave Ellefson (if you look, you can see Gilby's sleeve by Dave's neck).

Here's Gilby and Dave working out the bits on 'Won't Get Fooled Again.' It was a fun song to play, and I'm not sure, but I think that at some point that night on stage, I did a full-on Townsend windmill.

This was the view from the front of the house to the stage at the Marquee Theatre in Phoenix. And in 2 short hours from the time that shot was taken, I'd be up there (stage right), rockin' out. 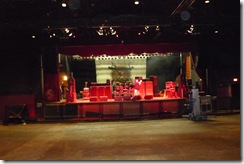 Me with the lads from Extreme (Gary, me, Pat, Kevin,minus Nuno).

Extreme did a meet and greet with us and I have to say. They are all really effin' good guys. They took the time to chat and take pix with us and just made US feel good about playin'. OH...and they signed whatever we wanted signed (are you listening Peter effing Frampton?). 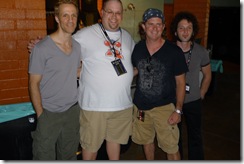 OH. And here's the missing lad. I swear, I'm twice his size. But he was a really cool guy. The whole band was really cool. And I vowed, right then and there to stop holding 'More Than Words' against them. They've been punished enough for that effin' song. 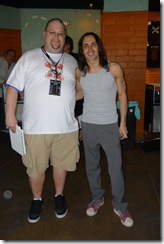 So after that, it was time to wait. We were going on 3rd out of 4 camp-bands that night. We chilled. Drank much water. Ate much sawdust er...protein bars. And then got ready to rock.

So, I got my guitar out, strapped on...and the guitar tech is like 'do you need me to tune it?' Need? Um. Hells yeah! So bammo. I had a guitar tech tuning my shit. When we walked out, I had another one plugging me in.

I know there's all this hype about jamming with rock stars and shit like that...but you wanna know what really makes you feel like a f**king rock star?? Having your own guitar tech. Dude. It was primo. And those guys were top shelf all the way. Kudos to you guys!

So we rocked. And it was loud.

And it was short. All too short. I had it. I had the taste back in my mouth of being back on a stage. And like that first kiss with a lover ..I wanted more. On stage at the Marquee, I had no idea what was going to happen on the rest of the tour, how many ways I was gonna get screwed by missing details, but I honestly didn't care. I just wanted to rock.

And like that, we were done. Got off the stage, went back down into the crowd and watched the last act. And then the counselors all got up and did a counselor jam. Duuuuuuuuude. It was amazing! (I wish they'd done one at the Fillmore, but I'm getting ahead of myself).

So, at the counselor jam you had all these guys from all different kinds of bands (Bowie, Cars, Deep Purple, AC/DC, Slaughter, Winger, Megadeth...you get the idea). And they were up there just rocking the shit out of some really great songs, man. It was phenomenal. I really can't put in to words what a thrill it was to watch these masters kicking ass. I had a veritable RockandRoll Chubby. It was wicked.

I had a couple of videos from the jam (again that I'll get posted later), but here's a shot of the jam:

You got Gilby Clarke, Dave Ellefson, Chris Slade, Glenn Hughes, Kip Winger, Mark Hudson. And then they'd rotate depending on what the song was. It was nuts!

Nice tee shirt. I'll bet someone cool got it for you...