Alright, now on with the Camp.

This was my 3rd Rock and Roll Fantasy Camp. I couldn't believe it. I had to pinch myself-really (serving two purposes-making sure I wasn't just dreaming, and making sure the NyQuil had worn off).

I was also just a TAD nervous. I'd checked the list and I was the ONLY guitarist in my group.  The group would be head up by the legendary Bassist from the pinnacle classic-rock-gods Deep Purple. None other than Mr. Glenn Hughes. I had gotten to chat with Glenn a bit in Vegas (he's a rep for Gibson/Epiphone and so was interested in my Slashie Epi). So I knew he was super nice and he'd be super cool about the whole thing. 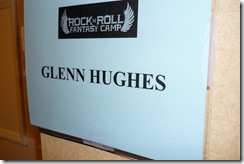 So. We get in there and start getting all set up. I let him know that I really wasn't a lead guitar player (I solo at about a 1.5 on a scale of 1-10). So, Glenn was going to take the other axe-duties and we were going to recruit one of the techs for bass duties.

As it turns out, things worked out splendidly (as they tend to always do somehow in Rock and Roll Fantasy Camp). For the band that day we wound up having 2 drummers (Mindi and Igor-who was in town on a business trip, but had this day off), Troy on bass (so the tech got off), Mike (a friend of Troy's I think) showed up a little bit later and jumped on axe detail. Glenn on Lead. I settled in to my pocket o' rhythm and Brooke assumed her place as singer and lead vixen.

We pounded out some off-list tracks. "Sunshine of Your Love" (actually, that MAY be on the list), then on to "Spooky" and finally rounding out the set with "I Hate Myself (For Loving You)."

And we settled on the name.

Brooke and the Ball Busters. Which, if you were paying attention to Brooke's day job listed in an earlier post, is actually kind of funny.

And with that, it was time for lunch. Another box lunch of sandwich, chips, some kind of cold noodly thing (that I didn't eat) and a cookie. I grabbed some fruit for later and made with the eating.

Since the rehearsal space was actually in the hotel, there wasn't a big central room. So me and a few others in the band (Mike, Troy, Mindi, Igor), ate in our practice room. Glenn fecked off for parts of the Bay Area unknown for a hot meal. I can't blame him at all. I'd only done this for 3 days. He'd been on this thing for 14 weeks or something crazy like that. So, if it was going to have him in good spirits for the afternoon jam, I was all for it.

Some shots of our camp day. 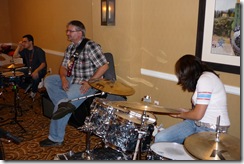 Brooke and Mindi talk hot pants or whatever it is rocker-chicks talk about with each other. 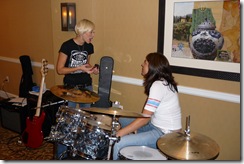 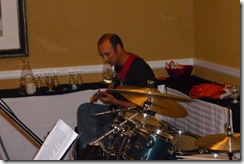 Glenn and Brooke give their radio interview. I later was interviewed by the same lad. Don't know if my segment made it on the air or not. Depends on if they wanted it to sound like they were interviewing a muppet or not. 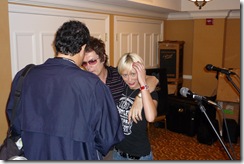 After lunch, it was time to break for Master Classes. I wasn't a drummer, but I really wanted to hear what Chris Slade had to say on drumming all the same.

And he didn't disappoint. The hidden gems in the Rock and Roll Fantasy Camps is the Master Class. A lot of to do is made about being in a band with rock stars, playing these shows in your bands...but honestly, the Master Classes are the real gems (imho).

And he talked about the back beat....and the pocket...and all these things that not only apply to drummers but to the rhythm section in general.

All in all it really was a great session. I was actually inspired to start banging around on some skins after listening to Chris. It was yet another nugget in the bag of panned gold that this trip has been.

Who would have thought a drummer could teach a guitar player so much without even mentioning the guitar? After the Master Class concluded, it was back to our band rooms for rehearsal. We ran through our sets a few times and we actually had it down pretty good. Two drummers and 3 guitarist made for a massive wall of sound (and I mean that in a good way).

The afternoon rehearsals wrapped up and we packed our gear and headed out to the vans that were going to deliver us to the Fillmore.

Now, up until this point in the post (and, truthfully, during the day), I had been downplaying tonight's venue in my head.

But it could no longer be denied.

We were going to be PLAYING on stage at THE FILLMORE. The legendary venue that has seen the likes of EVERY influential act in Rock in the last 40 years. If I had an extra pair of pants with me, I would have very likely pissed myself, did my best Ozzy impersonation and got on with it-I was THAT frickin' excited.

We pulled up to the back. To the area where we load in. 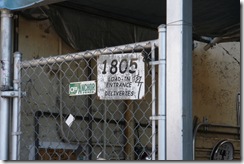 Once through the gate, we had to climb stairs that, no lie, had to be at a 85 degree angle. It was nuts. But it was the Fillmore...so my bitching was kept to a very minimal 'wow these stairs are steep.'

And then we were in. We took our gear in to the main auditorium (where it was later carted off to parts unknown) and we headed upstairs to 'The Lounge' (which actually has a much cooler name that I can't remember right now.

And the posters....holy shit. The posters. THE posters. You know the ones I mean. The legendary Fillmore Posters. 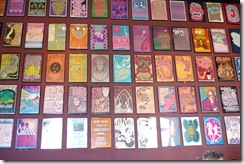 It definitely help set the vibe for the history of the place. 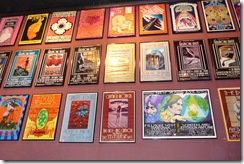 I mean, on college dorm room walls across the country were countless reproductions of these posters.

And here we were in the room with the originals.

There goes that rockChubby again. 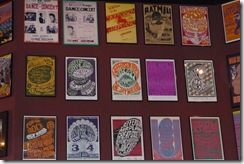 Here's a long shot of the room. 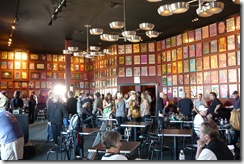 Nathan and Nathalie were in Slaughter and Slade's band for this gig. I thought the halo effect was kind of cool. 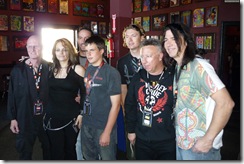 So. Here we were. A couple of short hours from playing one of the single greatest rock venues in the history of rock and roll. And it's the one place that if you asked me, in a million years, I would have told you there's no way I'd ever play the Fillmore.

But I did play the Fillmore. We ROCKED the Fillmore, man, ROCKED IT. But, as they don't allow filming, I don't have footage of that-but supposedly the DVD I can order from the RRFC people does have the footage of us playing the Fillmore.

Did I mention the show was sold out? 1100 people.  If you're wondering what a sold out show at the Fillmore looks like-it's a bit like this- 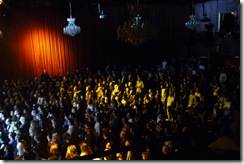 Yeah. Seriously. Chandeliers. I'm telling you, the whole frickin' thing was so surreal. And I have to apologize to Mindi (I was a TAD um...loud and nervous when we couldn't find the rest of our band...but I think it all sorted itself out and went just fine).

This shot of Kings X from the balcony shows kind of what we might have looked like on the stage. 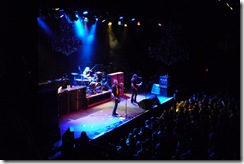 It was just a magical place to play. That's really the only word I have for it.

It was 12minutes of my life that made everything that I went through earlier (and later) on this trip worth it.

I played the Fillmore, to a sold out crowd, in a band with Glenn Hughes.

How can I possibly top that?

Hey Todd, how are things going? Just found your blog on Glenn's forum. I still can't believe what happened in The Fillmore, we definitely kicked ass. My friend JP who was playing with Chris Slade was able to film our set from his photo camera. I haven't gotten it yet, but although the quality is probably not good, it will relief a bit our pain waiting for the DVD :-)
Keep in touch, let's exchange some of the pics.
Cheers,
Igor

Igor!!
I know, right? Playing the Fillmore to a sold out crowd was definitely a high point!!

I didn't know my little bloggie made the rounds to Glenn's forum (I'll have to go check that out :-)

I would love to get a copy of that footage of us playing. I'm also waiting on the DVDs :-)

I'm putting together a little 'video essay' of the whole camp experience. And yeah, we should definitely exchange pix. If you want, email me your info to todd@twistedzen.com and I'll send you what I've got of San Fran.