Vegas was quite amazing, to be honest. And the turnout at the Hard Rock was even better than the crowd at the Marquee (which kind of surprised me since we didn't have the headliners that we had in Phoenix).

So, Sunday was our travel day. I don't know how late the rest of the VIPs stayed out. I think Nathan was in early and I don't know about Nathalie, Bill or Steve. Brooke, I guess was flying on to San Francisco and wouldn't be on the bus. So it was our usual group.

We got loaded up and hit the road. It was almost 10AM and we had a 10 hour drive ahead of us.

I have to be honest...I was looking WAY forward to San Francisco for a lot of reasons. First and foremost, though, had to be the climate. Phoenix and Vegas were HOT. And yes, please feel free to give me your philosophy on dry heat vs. humid heat. I get it. 90 degrees with 90% humidity in Ohio is hotter than 117 degrees in Phoenix with no humidity. OK. Fine. If by 'hotter' you mean more miserable, then yes, probably. But if by 'hotter' you mean hotter...then no. 117 degrees is STILL hotter. Dry or not. Shit's hot. mmmkay? And I guess I might get used to it if I lived out there and then I'd be bitching about Ohio heat....but for now-I wasn't used to it. and I was sweating constantly (much to the chagrin of my busmates, I'm sure). I was also drinking water constantly. So, between the sweating and the watering, and the not eating very much (just enough to keep from passing out), I wound up losing 14lbs on this little jaunt. I think I know now why you don't see too many fat rock and rollers.

Back to task. Back on the bus. And away we go to San Fran.

And since this was the day we spent the most time on the bus, I figure I'd give you a quick little tour.

This is the front part. That TV is right behind the driver. 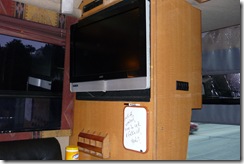 This is the rest of the couch from the shot above. Goes into a table with a bench. There's the wi-fi. And there's the Washburn Acoustic/Electric that the RRFC Folks put on every bus. 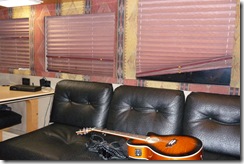 Here's the other side of the front (you can see the table and bench). And this is the 'kitchen counter' area. Sink. 2 Fridges built in to the cabinets. The door leads back to the rest of the bus (sleeping area, back lounge). 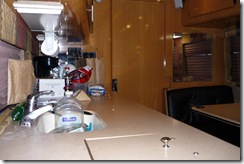 Shot down the hallway of the sleeping area. Bathroom's on the left. There are 12 bunks total, but if there had been 12 people on the bus, it would have felt VERY crowded. 6 or 7 was about the max. 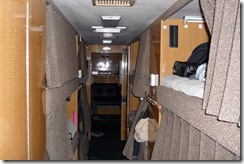 This is the back left corner of the bus. The 'back lounge' area. there's another table here, too. 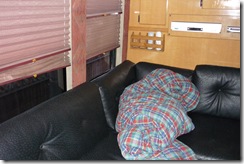 The right side of the back lounge area. Another TV. Both TVs were the same size (32", I think) as the one we just got at home. 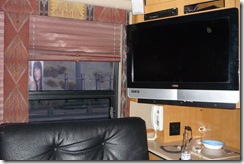 And the bathroom. It was a tossup between which one was more cramped, this or the airplane lavoratory. I think the plane was just a teensie bit tinier. 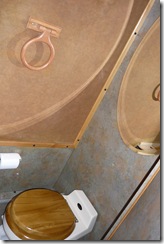 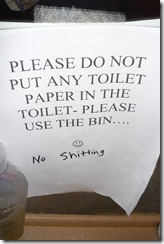 This concludes the tour of the bus. After a brief stop just over the California border for some fuel, we stopped in Barstow to get some grub. I got some Chicken Taquitos at Baja Fresh...and I have to say-it tasted better here than the Baja Fresh in Ohio. Wonder why that was?

Shortly after that, we realized that the battery for the generator had bit the dust. Things got hot in that bus pretty quickly. After a couple of phone calls, we had one tracked down. Rob got it installed and we were back on our way.

We rolled in to San Francisco sometime after 8PM. Steve knew that most of us hadn't been there before, so he found out what route we were taking in and called us up to the front of the bus. And we came over this bridge...and because of the angle, we saw the skyline (all lit up at night) just rise up over the horizon. It was very cool. So, thanks for that Steve.

After driving around forever (and maybe a little off-roading?), we got parked, unloaded,and got all checked in at the Serano Hotel. I found out that our camp for the next day was also at the hotel (no cab fare-yay!) Some of the folks talked about going out. I cornered Rick and asked for the nearest Drug Store (and not in the traditional rock and roll way). He pointed me 2 blocks up the street to Walgreens.

My dinner in San Francisco that Sunday night consisted of Pringles, Orange Juice, and a healthy dose of NyQuil.

And then I crashed hard...on to this. 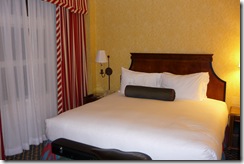 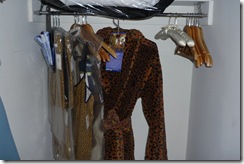 But the thought of having to explain to Courtney and Rick why that showed up on the room bill was incentive enough to just say no.

And with that, I slept.