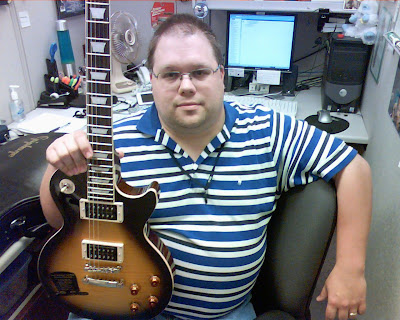 So, I got my little 'ding' your package has arrived email this afternoon and rushed home to grab my major award (for you Christmas Story fans). No, it's not a bowling alley. Or even the deed to a bowling alley. It's a guitar.

And it's every bit as amazing as I thought it would be. I've never owned a guitar this nice in my entire life and would not be now if it weren't for the contest.

(I'm at work now, so more details to follow)

All right. So the last 4 hours of the work day really couldn't move fast enough. In between trying to help a customer with a downed system, I took a couple of 'ooh-ahh' breaks as some co-workers came by to see my gweetar (which has yet to be named, but definitely needs one-nothing that looks and plays like she does should be without a name).

And then 4 o'clock came (but it was actually about 4:30 before I was out in the parking lot loading up and heading home. A short 7 minutes later and I was pulling in to Casa De Nuevo Guitaro. A quick change out of works duds and into short and t-shirt and it was time to see what this baby could do.

Hooleeee sheeeyite! I've plugged a good 3 or 4 guitars in to the Vox in the 6 months I've had it...but nothing that sounded like it was taunting the amp to play along. Wow. The weight of the guitar feels...right. The feel of the frets...going up and down the neck...everything. Everything about this axe makes me want to just play all the time. It just feels (and sounds) so sweet.

I say this in all seriousness. If this were the grand prize-I would say, without a doubt, that I was completely content to jam on this guitar for long times to come. But...the fact that this was the 'oh and by the way, you'll want a guitar so we're gonna through in this kick ass guitar' portion of the contest...and the Rock and Roll Fantasy Camp was the actual grand prize just makes my head go all swimmy (like the intro to the original Outer Limits).

It's kind of blowing my mind right now that next week (9 days hence), I'll be on tour with the Rock and Roll Fantasy Camp counselors. My stories of the road will consist of the 1 hour Devilcake roadtrips...the trip to the Cleveland Folk Festival because I wrote some lyrics (I got a harmonica for that!)..and they'll have all these crazy tales that will sound like utter fiction to me.

And yet, everything I'm reading says these guys really do a great job of relating to us normal folks...but we'll see. There's a question in the registration that asks what I hope to achieve during the camp. And its' simple.

I want to pull of a blistering guitar solo. I can play chords. And sometimes I even play them the right way. But I want to just be able to pull off that solo where the guitar player is just so into it that it's him and the guitar and nothing else in the universe...and you know..you just know that it's on. You know, the one where you look around and see gaping jaws and other people in the band smiling. I have been one of those other people in the band smiling when our guitar player(s) pulled of these solos that made me just go "f*** yeah!" But if I could have my ultimate Rock and Roll Dream come true...it would be to be that guy. That guy that nails the kick ass solo that has everyone going...'Demm....THAT was some rock!'...or 'Who is that guy??' Now, in the span of 2 weeks, that may, in fact be a lot to ask for...but it's certainly not too much to dream for :-)

I think in order to frame the movie properly, I'm going to have to have a few 'pre-camp' closet testemonials (a la every reality show you've ever seen). I don't want to forget what this feels like (and I think I might once the whole thing starts for real). Um..yeah. Definitely.
at August 12, 2008

I was thinking about that this morning... that'll you'll be on the road in less than two weeks. That's friggin' awesome! I hope you get all that you want out of the tour and workshops and more. :)

It is very pretty. I'm digging it.

And yeah...8 days to go. It's blowing my mind. I'm having to keep the excitement in a little corner in the back of my head so i can still function on day to day stuff.

I think that anything I get out of it is going to be 'all that I want'..I mean, sure I want to rock a solo...but ANYTHING I do there is going to be so much above and beyond what I've ever experienced in that realm that it's going to be amazing.

we'll have ya tearin' @ss on the new axe by the time you leave for 'the road'.

& holding an invisible orb in one hand & kicking your leg straight out.