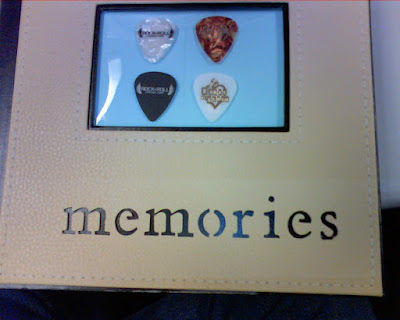 There's something to be said for actual photographs. Sure, I love my digital camera and I have GIGS of photos saved, but today I got back abou 100+ prints that I had made from my pix from the Rock and Roll Fantasy Camp Tour and it was just really kind of cool going through them.
I put them in a neat little binder (And included the picks that I used at each of the shows).
I figure, that way, I can show the pix (And there's a little thing in the album for comments on each pic) and it's better than saying 'oh yeah, go check out my blog). Because it's right there.
And yeah, most of the pix are ones that are already on the blog, but it was still kinda cool to go through and put them in the album and actually 'hold' the picture....like touching a memory or something.
I don't know. I guess it sounds kind of lame, but hey-that's just the vibe I've got on the whole thing right now. I still have a couple of things left to put in the album before it's 'complete' but ya know. Like everything in my life (it seems), it's a work in progress.
at September 02, 2008