I just haven't had that much to say lately (a recurring opening, I suppose). I am still getting the hang of using the new netbook. Oh. I guess that's news, huh? I got this-Samsung NC10. The reasons are myriad, but the main rationalization is that my previous laptop (an Averatec 6210x60 which I had bumped up to 2GB of RAM from when I was still using it to edit video) was just getting under-utilized. The majority of my laptop work as of late has been to type, keep notes at the various meetings I'm going to (with greater frequency, it seems), and surfing the web to chat, check email, etc. Meanwhile Nancy was trying to remote in to her office and work on Sharepoint sites and other work on a POS Dell P3 900MHz. It seemed a little cheezy to me. So, I did my research...headed to MicroCenter, played around with a few of them. Settled on the MSI Wind and then wound up not getting it because of a glitch in the matrix. But that worked out for the best. I went back and started reading reviews. And while people liked the MSI Wind, they LOVED the Samsung. Saying the keyboard was bigger, the finish was 'more professional' and the battery life was phenomenal (6+ hours on a full charge). That sold me. I ordered it from Amazon. Had it in 2 days. Dropped an extra GB of RAM in there and away I went. That was last week.

And I'm still digging it. The size, the specs, everything I want a laptop for it does...and more. And Nancy has a better laptop to do her stuff on. So, I think it's win-win. And that's my story, and I'm sticking to it.

In other news, we're heading out to Maryland next week to see Nancy's dad and his wife and spend Christmas out there with them (And her sister's coming out, too). It's gonna be the first Christmas I haven't had at home for....my life, I guess. And it's the first Christmas Nancy's had with her dad in a long long time. It should be a good time. I'm actually looking forward to it.

And, my family is having Christmas Eve on Monday (we fly out to Maryland Tuesday), so we still get to spend time with them, which will be nice.

Work is fine. Survived the first round of...um...making changes in response to the economy (?)...we're told that the current crew is the one that's going to take us through 2009. It's tough, more work, blah, blah..but it's not as much work as starting over somewhere else.

Things at ICC (International Christian Center) are HOPPING. The Video/Multimedia Ministry is gaining momentum and 2009 is going to be a VERY busy year. As the head of the ministry, I had to submit a budget this year. That was a weird (and very grown-up) thing for me. We also had our first of the quarterly 'large-group training' sessions to get people up to speed on the goals and visions of the church, our ministry and our team. It went REALLY well. Turnout was lower than we'd hoped for, but I think the people that came really got a lot out of it-which was a blessing in itself. 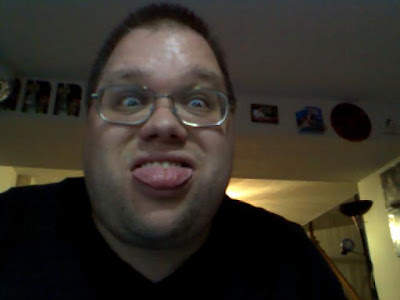 Did I mention the netbook has a built-in webcam? Yeah. I know. Scares me too.

Alright. I'm gonna work on some other writing before crapping out for the night.
Talk to you peeps later.

1) Cool notebook. I wasn't sure how much we'd use ours, but it gets used alot now. However, after last night, I've determined that doing bills on the laptop is a very bad idea mainly 'cause I can't type as fast, certainly can't use the touch pad as fast as a mouse and... it just doesn't feel right. I need seclusion when I do bills for whatever reason. But back on course, it was nice of you to let Nancy use the supercomputer instead of struggling on some stupid POS.

2) I wish the battery on my laptop lasted 6 hours. I'm lucky if I get an hour and a half. Most of the time it's plugged in now, so I guess that really doesn't matter for the moment at least.

4) I still remember the first Christmas when we celebrate Christmas at home, but it was Christmas Eve instead of Christmas. It was a bit surreal. Of course, the following year the family came to OUR house for Christmas. That was even more mind-blowing. But then you get over and all is well.

5) This economy sucks. Glad to hear that you are in the clear. My boss created a new position for me... and of course the minute he mentioned that my brain said 'this will be the first job to go'. But no matter, maybe I'll learn something from being in this new position which isn't quite fully defined yet. He keeps calling it 'something like a test system engineer' where I look at things from a more techincal view, look at the coverage the other teams are doing, etc etc etc. Yeah, I don't quite know what to make of that either. But anyhoo. I'm still leading my current project, so life for me will pretty much be status quo until the product ships in like June or something.

7) If I don't get a chance to talk to you before you head up to baltimorewashingtoninternationalairport, have a safe trip and very merry holiday. peace outside!