Henri Cartier-Bresson said that "your first 10,000 pictures are your worst."

I checked my photo-hard drive this morning before heading to work and it had 13.576 files on it. That’s since 2005. I’m pretty sure that they aren’t all single files (in fact I recently adopted the practice of making dupes of my files before editing). So, even assuming for dupes, let’s say there are 7,000 unique shots on the drive since 2005.  Given that math, I’ve got about another 2 years to go before my ‘worst’ shots are behind me.

Of course I’ve taken film shots from an early age, so the likelihood of me already being past my 10,000 worst pictures moment is high.

And that makes me feel good.

I figure I almost have enough for a book on clouds now (I’d want to get a few more sunset and sunrise shots for the catalog, but other than that, my cloud book is almost set). I’d call it ‘Search for Silver Linings.’ It can be a noun (as in MY search) or a verb (as in, you there, GO SEARCH). I’m not sure how far away we are from it, but I think it would be neat. 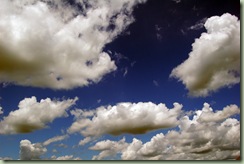 In other news, had a great phone call with D yesterday. I know that with the interwebs, we can all still ‘feel connected’ but there’s still something about hearing a voice or hanging out in person that’s pretty damn cool.

Here’s one of the images in my head that encapsulates my friendship with D. 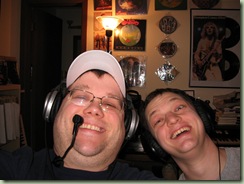 That was taken a few years ago when we were recording “Side One, Track One” (a neglected blog I started that contained complete album sides along with colorful commentary before and after the music played).

Yeah, a hanging out session is definitely in order.

For those of you (3 or 4 that read this) wondering about work. It’s cool. Lots o’ things happening and it’s going to be an interesting Fall (and I mean the season, not the verb). And that’s ‘interesting’ in a good way (not the way that wives use it when they think their husbands just did something completely retarded).

Other than that, I’m not really sure what’s blog-worthy these days. I’m (really) living the dream. And right now the dream is either having a national premier of a movie on the theaters country-wide OR having a photo on the cover of National Geographic OR a gallery show (or, eff it…how about ALL THREE??-That’s not out of the realm of possibility).

How about you? How is everyone out there in bloggy-blog land doing these days?