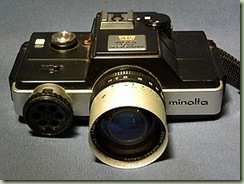 This was actually my first camera (that I remember). I think I may have had (or used) a 110 Ektachrome at some point, but this was my first real camera.

There was the opportunity for some amazing pictures. But most of my pictures from France (if I even knew where they were) are blurry. And that sucks.

But I figured it out today…that’s how far back my interest in photography went. Earlier actually. I can remember my dad developing photos at home. He had a good rig (Pentax, I think..maybe Yashica?). Gramps I’m pretty sure was a Minolta man. My brother later would prove to be a Nikon guy. And I was pretty much wide open…I settled on Fuji later in life when I went into my Point and Click Phase.

I very recently went the way of my brother and became a Nikon guy. And I’ve been very happy with that decision.

So, why all this nostalgia about my first camera? More of a discovery really. I figured out WHY I love video so much. It’s pretty much because I love Photography. And it’s a way to get a bunch of pictures in on place.

But I’m finding that I’m getting more of a center back in the single snapshot of a moment in time. Frozen.

I’m not sure where this was going. Other than to say that I miss this little Minolta. I wonder where it went. I wonder if I found it, if I could still get 110 cartridge film for it? Sounds like a winter project.

There’s been a whole bunch of stuff going on elsewhere in Todd-land, but I thought I’d just get this little random blip out there while it was still floating in my head.

(oh, if you’re new, the fruits of my Photoddgraphy can be found over here http://photoddgraphy.blogspot.com).