Weekend at Thrifty's & an Answer to an Age-Old Question

Alright, first off, I want to just say that the new blogger editor is kind of annoying. There's a rant in the making, but it's really nothing that matters other than to me...when I can't find the cursor. Or the pictures upload wonky.

Now that that's out of the way....
This weekend was bananas (insert Gwen Stefani here if you must). Friday I was slated to hit my local-within-walking-distance-brewpub with some friends. That didn't happen. I'm on call this weekend, and lets just say I got called....put in the equivalent of an additional workday Friday night, came home, slept for 4 hours then went right back in at 6AM the next morning for a couple more hours and leave it at that, shall we?

Saturday afternoon, though, THAT was the event. Darrin was slated to hit Casa Del Skaggs at about 1 and we were gonna head up to Waldo for the World's BEST Bologna Sammich. But he was out and about already so he landed here earlier and we hit the road.

There are pix here on the Facebook Album (although you may have to be one of my FB friends to see them, not sure how I have them shared). There was also some video taken, including an 11 minute 'as we're driving' kind of thang. I don't dislike any of you enough to post THAT. It was...in a word....not fit for public consumption. Darrin and I would laugh at it (because we were there). There were some other high points.

One in particular that comes to mind was the debate...actual struggle that was had trying to decide which bottom of the barrel pilsner Darrin was going to order.

And thanks to Blogger's new (not so helpful) interface, I can't post them.

**UPDATE** I got the OLD editor back. MUCH better!

Here's the initial though process behind which one to go with....


Finally...the decision is made..and the pour...


And then the food arrived. Darrin has his first bite of the world's best bologna sandwich (notice the little dance...this is NOT unique. I have seen this multiple times and have myself done this 'Damn This Sammish Is GREAT' dance).


After the sammich....and the curly fries (for me, Regular Fries for Darrin)....and the Munchers (think Jalapeno Poppers with potatoes in them)....and the Chocolate Creme Pie...we were pretty much done with the G&R Tavern that day and headed back on the road.

On the way out we passed a sign for a sports bar (also in Waldo) with Ribs....so, we put that one the list. Coming down 23 we hit the Goodwill Thriftstore just outside of Delaware. I miss thrifting. And I miss taking pictures of stuff that strikes me funny.

The only pix I took, though, were of the albums I got (only 3, but oh boy...serious sample fodder, me thinks)...

That's Romania to the rest of you... 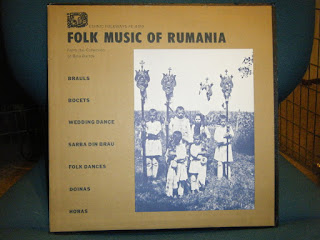 This will be good for sampling and laying down sound beds on the tracks that have lately been floating around in my head. Who doesn't like a good Gregorian Chant? And hey... from St. Thomas...I used to know some folks that lived on St. Thomas. 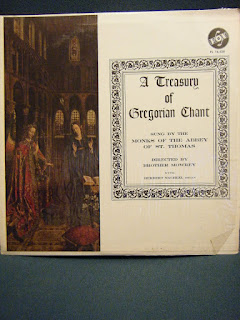 The catch, though, was this little gem. It's been QUITE a long time since any album has made me just stop and go WTF??? Thank you, Paul Hogan, for re-affirming my belief that no matter how much I've seen in my 38 short years on this planet, there will always be something that makes me pause and say...'Wow, man....that's effed up.' For 50cents how could I possibly pass it up? 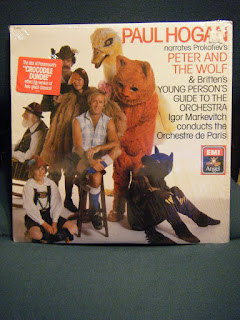 And then we came home. It was a very good day. I chilled Saturday afternoon, watched Butler give a clinic to Kansas State (I know the world calls them K-State, but I've become partial to calling them KansasS).

And...somehow, somewhere in the evening (after I finished the 2nd half of the pie that kicked my arse in Waldo), I got in to NCIS...Dude. I knew when I saw Mark Harmon cap some pre-op tranny right between the eyes that I had found yet another impossibly cool crime drama to start watching. Word.

Today was pretty chill. Church in the morning (where I found out they 'need' me to play guitar next Sunday...yeah...Easter Sunday....no pressure there! But it's cool. I'm gonna have fun with it...and it's Journey, afterall...yeah...we're playing a Journey song at praise and worship...yeah-I know. It IS pretty cool!)

And that brings us to now.

Hope your weekend rocked applesauce, too! In fact-tell me all about it!

1)It WAS difficult to decide on the beer. But after telling my wife the story, without even knowing which one I chose she said 'Duh! Stroh's!'

2) Yes, it is a damn tasty blog-na sammich. I have to say, I could do with some dill pickles instead of sweet pickles, but I do say it does add to the character of the sandwich so when I have one again, I'll probably still get it with the sweet pickles.

3) Hey! Don't forgets Fred's diner in the shiny building what was a bit closer to Delaware. That's next on the list, yo!

4) You might as well add the Starliner Diner in Hilliard to the list. It's almost embarrassing that I have not been there esp since the Mrs lived up that way for nearly 6 months.

5) That Paul Hogan LP was a serious WTF moment.

And I never heard of the Starliner Diner, but I'm up for it. We need to add Fitzy's Diner to the list, too (it's on Schrock, not too far from the brewery)...GINORMOUS breaded pork tenderloin sammich!

Yeah..Journey...at church. Not sure how they're gonna get around all of the lyrics to 'Don't Stop Believin'...but I'm working on the guitar parts (my guess is that they're doing the chorus only...which is cool...)...should be fun...I'm just gonna let go...do the best I can and go with that :-)