I'm way late in posting this. Well, by way late, I mean a week. Which for me (who used to blog all the friggin time, it seems, is way late.
It really was a blast of a weekend, so I'll just dive right in then.
Friday night, I brought back an old friend, DJ iTod. Regular readers of the blog may remember DJ iTod's sole performance back in 2005 (or was it 2006)...either way. A friend asked if I would DJ a elementary school carnival. After some thought (not much at all), I loaded up the borrowed band PA gear and got stuff ready at McNamara Park north of Westerville (which is a kick-ass shelter, if you're wondering).
The kit looked a little (exactly) like this: 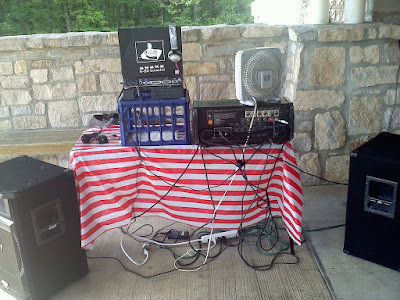 Since I was rocking the laptop only (and had the iPod in my bag), I figured it was OK to re-use the DJ iTod moniker (although I'm pretty sure I never said my name at all, so it didn't really matter)
On the other side of the shot it looked a bit (exactly) like this: 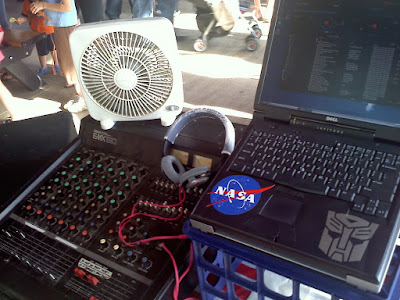 DJ iTod in the hizzous. You can't tell by the look on my face, but I was very close to brain-mush at this point. Something about 2 1/2 hours of children's songs. To be fair, though, They Might Be Giants have some killer kids tunes. 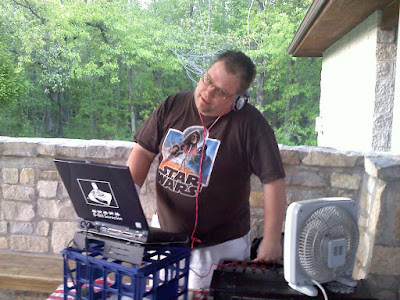 After packing up the kit I headed home. I by-passed a couple of Friday the 13th parties that were happening and headed home to freshen up a bit before hitting Brewstirs. Don't really need to get in to too much detail about Brewstirs. I go there. Friends show up. We drink. We (sometimes) order pizzas*. Sometimes we dance. Sometimes we sing. In the Summer or the winter, cuz it ain't no thing. But yeah.
Saturday morning I was to meet Ian and Darrin at the quarterly record show. As I pulled in to the lot, I remembered Ian was without cell phone. So I called Darrin. Darrin was sitting this round out and spending a nice family-time weekend with, well, his family. Which is cool.
I headed in and spotted Ian. Halloo's were exchanged and I started my path of walking around having absolutely no clue what I was going to spend my dj-gig dough on.
And then I saw it.
And I knew I had to have it. 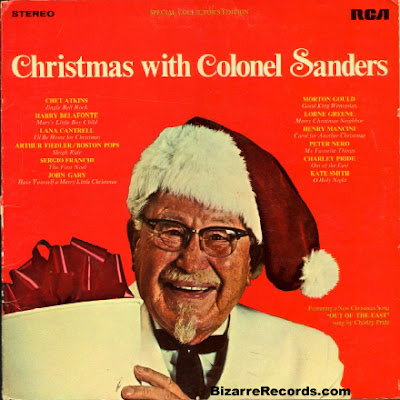 Yeah. Christmas With Colonel Sanders. Seriously, how could I NOT buy this. The almost ancient Chinese guy in the too white suit was giving me that hypnotic smile. (the photo is from some other site because I'm kinda lazy that way). There's a nice letter that takes up almost the full inside written by (I'm assuming) the Colonel's own marketing staff. I haven't played it yet, and really don't know if I'll ever need to.
I also picked up a copy of "Green" by R.E.M to sit right next to "Document" on my record shelf. I was on a quest for 12" singles (still trying to convince Brewstirs to do a retro/vinyl night). Pickings were slim. Well, let me re-phrase that. There were quite likely a shit-ton of 12"singles there...but as we've established by the previously nicked photo, I'm a bit lazy. So I was looking for vendors who had the good sense to pander to my laziness (and potentially minor hangover) by separating out the 12"singles from the rest of their collections. I found a couple such vendors and left with the following gems:
I'm still trying to find a replacement copy of Rob Base and DJ Easy Rock "It Takes Two" to replace the one that I lost when Flamingo Isle closed its doors (before I got my vinyl out).
After circling one more time than necessary for me to know I wasn't about to flip through any more records, I found Ian and a new guest to the party Michael Million (who I thought I might have seen earlier, but dismissed it because as last I knew, he was living out of state...but nope..it was him (and still is, I presume).
We gathered up the wagon train and headed off for gyros. We skipped the scary mob-front gyro shack on Morse Rd. and headed further east on Morse Road and wound up at the Mykanos Taverna in Gahanna. And I have to say. I had the BEST gyro I've ever had.
It was called the Athenian Gyro...and I jokingly called it the 'Po'Boy Gyro' when reading the menu description. When it arrived, I knew I wasn't far off. 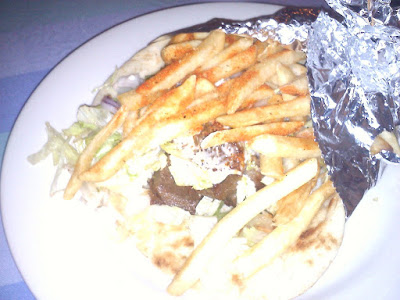 Dude. I shit you not, this thing was awesome. The sauce was awesome. The seasoned fries were awesome. The fact that they were IN the gyro was doubly awesome. The whole thing freakin' rocked.
After consuming that heavenly feast (and kicking myself for NOT getting the Groupon for that place) we waddled up to Music Go Round (there was an Orange Whip reference related to bottled water in there too (I caught it Ian, no worries :-))
I knew I wasn't really going to buy anything, but it was fun to look at the PA cabinets anyway :-).
I honestly had more fun watching Ian and Michael go up and down the rows of guitars and the color commentary that ensued. It was good shit and I could see myself watching it on Discovery Channel at some point.
In the midst of all that we stopped for a Bad Grammar Moment: 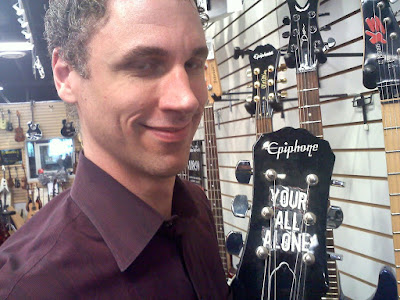 To which Ian replied: "My all alone what?"
We may never know. The other funny thing about the shot is that Ian looks incredibly baked. Which, some may think he is...but if I had to put money on the last person on the planet to go that route, it'd be him. So...Bad Grammar+Irony=Comedy Gold.
I think the next pic pretty much speaks for itself: 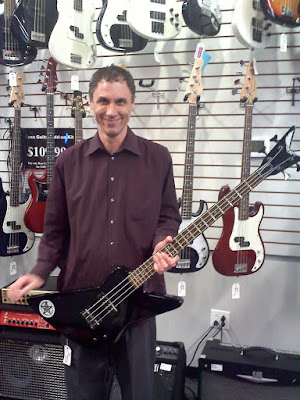 I bugged off at about 3, so I'm not sure how the rest of the day wound down for Ian and Michael, but it was a blast. And one I hope we don't have to wait another 3 months for.
I headed home and grabbed the photog bag. I was excited to shoot a very special event for a good friend from high-school, Traci O'Brien (in yellow in the photo below). She was celebrating her 1 year anniversary of being sober. It was cool as shit. Her friends and family came out to support her. Her sister Nancy actually got Traci to the house under the guise of a birthday cook-out (it was Nancy's birthday), so it was just all perfect. And Traci was surprised. It was a fun afternoon, and I was blessed to be able to capture some of those memories for them. 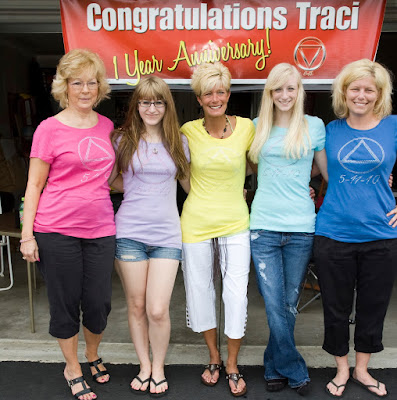 Not sure how Saturday could get MUCH better, I headed home and started going through the pix. I wound up heading to Brewstir's for the rare '2nd Night in a Weekend' jaunt (but it was, afterall, an epic weekend, so I felt the need to keep it going).
Sunday was very much a lazy/chill day. I think something happened to make me think it was a cool continuation of the previous 2 days of the Epic Weekend (but for the life of me, I can't remember it now as I'm staring down the clock reminding me that in 4 hours and 58 minutes I'll be getting up to get ready for work).
So, that's about how the way fun weekend went.
Man....writing feels good. I need to do more of this shit.
Oh...right...bedtime.
Talk to you later, peeps.
-A.T.
*-So. The Pizzas. Normally I order a pizza or 2 (if there are many friends there). Tonight was no exception. I ordered a pie from Classic Pizza. Well...we got a new delivery guy. Complete Rookie. The first time he showed up (12minutes after I ordered), he gives me some other guys pizza (which I paid for)...and I swear I almost got my ass kicked over it. Luckily we didn't eat off of it...he gave me the money I paid and everything was cool.
Second time this guy comes back (with my pizza this time), he's looking for 'Bob' (now, I'm not sure Bob and Todd could ever sound alike, but whatever)....so this dude is freakin out. And Chris, the bartender knows Chris, the manager at Classics. So...we assure the guy that he's not going to lose money...someone will buy the pie. And I was like 'dude...this MIGHT be my pizza anyway, can you just open the box and let me see it'....he was freakin'...he was like 'I've been here 2 times already tonight and it's just BUSY in here'...I said 'yeah, you're gonna be back 2 more times before the night's over (it was 3 times)...long story short (too late)..it WAS my pizza. So now Chris and Bill (the bouncer) call me Bob-Todd. Heh. Normally Pizza delivery goes a little smoother. LOL.

Heh.. I have the Col. Xmas as well. I honestly don't believe I have ever listened to it. Kinda like the Radio Shack CB talk album.

Glad yoo foo's had some fun and a good gyro.

Word up on the iTod action. Seriously? You were spinnin' kiddie toons? Far out!

I'll have to join you some evening at Brew'Stirs soon. For some pizza as well of course. :)

It was a good weekend, to be sure. And Darrin, yes..3 hours of Playhouse Disney, PlayDate Disney, TMBG ABC's, and soundtracks to half a dozen Disney movies. After the event was 'officially' over, I started dropping some 80's knowledge (for any of the parents that were still around). And we're gonna get a retro night going at Brewstirs sometime (soon I hope).