And There's Still One More Day!

June 23, 2012
This was going to be a post about how tragic the weekend turned.

And then I got to thinking about what a tragedy really is. A tragedy is a parent listening to their hungry children cry themselves to sleep. A tragedy is the 'collateral' damage in a war zone. A tragedy is living your life without fulling understanding this world or your place in it.

These things are tragedies.

My little sob story of how my shoulder hurt from carrying my camera bag on a shoot for 3 hours last night or how my car is in the shop because the catalytic converter decided it was done working is not a tragedy. Y'all should slap the shit out of me if I ever get to the point where that shit bothers me. It's all good. you have my permission.

I've been blessed this weekend, truly. Friends of mine (who've adopted me in to their family), hired me to shoot pix of their friend and Special Olympiad. So, I went down last night for opening ceremonies and was just blown away.

I think I need to get my cameras in for service, though, because both cameras at various points in the evening had moisture in the viewfinder. Very odd indeed. It was in a word, humbling.

If you ever have any doubt as to what pure unadulterated joy looks like, I suggest you get to a Special Olympic event. You will see so much of it that it will overwhelm you. I guarantee you'll be changed.

Here's a quick glimpse snapped with the phone: 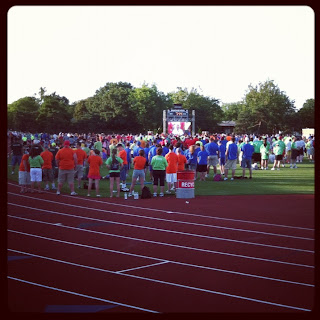 As I was leaving Jesse Owens Stadium, I saw this and had to take it-it seemed to match the beauty I witnessed on the field: 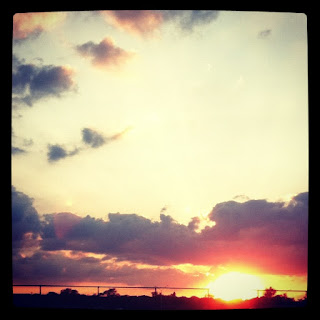 Needless to say it was a powerful event.

And one that made my shoulder hurt. Remember the 'not a tragedy'? Yeah. So, for Christmas via gift card I got the Tenba Response Large Shoulder bag (looks a little exactly like this): 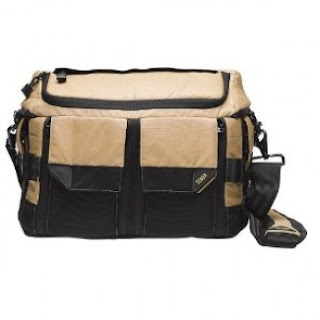 Don't get me wrong. I really do love this bag. Although it took me over an hour to configure it how I wanted it and get everything in it, I still dig it. For shoots where I can set my bag somewhere, it's brilliant.

However, for shoots where I need to move around, all that gear pulling down on one shoulder gets to be a bit much. My shoulder was really feeling it last night when I got home. It really kind of reminded how for a lot of reasons, I'm a camera-bag/backpack fan. I have the Tenba Shootout, but it doesn't nearly come close enough to hold my kit.

So, after another 3 hours this morning at OSU shooting our Special Olympiad, I head to Midwest Photo Exchange. Don't worry, I had a helper this morning. My shoulder thanks you, Tom.

The plan was to hit MPEX, see what they had, then head over to MicroCenter and see if my employee discount got me a better bag of the same/similar configuration. I got to MPEX and the dude (I feel like crap for not remembering his name...but he's a huge Think Tank evangelist with guages, so he won't be hard to spot when I got back. But anyway, I was looking at the Tenba backpacks (I've given up on Lowepro and ThinkTank's are way the hell too expensive for the likes of me). Anywhoo...dude was like 'I really like Think Tank' blah blah. And I shut him down because the small ones which wouldn't even come close to holding 1/2 of my kit were easily $250+...way out my budget. Then he was like 'do you have a problem with used?' Um no..are you kidding me? I'm the thriftKing. I almost said as much, but then I realized HE probably didn't know that like say Darrin or Ian would.

So he shows me this used bag called the Think Tank Airport Antidote (version 1.0 I later found out). And it's complete, minus the laptop sleeve (found this out later too) for $99. This bag looked sweet. Dude said 'I was going to get this if it didn't sell'

I looked. I hemmed. I hawed. I did the mental calculations on where each piece of gear would go. Then I started playing with the zippers. Solid. Separate all weather cover. Solid. Straps for the tripod that you could  leave on or store. Solid. Hookups for a Batman style utility belt. Solid. SIDE handle for walking through airports like a carry on.

This bag is sweet as f**k. Not even going to lie. The Antidote v2.0 retails for $200. The main diff I can see is that there's a flap that closes over where the laptop sleeve goes. Not worth another $100 to me--besides, I didn't even HAVE the laptop sleeve...what did I care?

I'm gonna have to go back in and tell him he may have just converted me. I wore it to an anniversary dinner shoot tonight. It just felt good on my back. Very comfortable. And he showed me his bag today, which is several years old but looks new).

And...I got everything in the bag...with the exception of the 500mm Mirror Reflex lens (which I only shoot moon shots with) and the 80-200mm Sigma that used to be Steve's. Well...not sure how often I'll be shooting with that since I got the Nikon version. And I have a separate lens bag for when I need to carry either of them on shoots. No harm no foul.

Not only that...but shit just makes sense with this bag. I had it loaded and configured how I wanted it in 25 minutes. Which, if you know me, 25 minutes to get a camera bag just how I want it is a record. Like a call Guinness record.

This weekend has been full of some seriously good stuff. 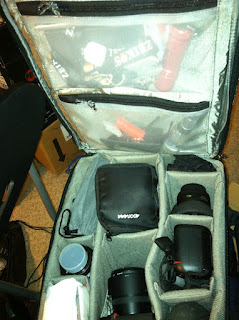 The bag with my gear loaded. It all fits. And where it all fits makes sense.This bag is the shit.

Speaking of shit.
My car's in the shop. I got an oil change yesterday which really has nothing to do with anything other than being phenomenally poor timing. Yesterday evening it sounds funny. I chalk it up to the synthetic oil.

This morning trying to get on to the freeway there is NO pickup. The thing revs and there's no balls to the acceleration.

I call Mike over at Boyd's. He's not working today, but calls the working manager and lets him know. I take my car over and they get it right on the lifts.

BAMMO--catalytic converter is plugged. Needs to be replaced. Gonna be nearly $500.

But it's only Saturday and the weekend is going pretty well so far, actually.

I shot an anniversary party this evening at Brio (And was fed) for good friends who are celebrating their 45th Anniversary together.

They consider me family.  And it's cool.

The weekend truly does kick ass.

Hoping yours is too.

Peace out, there's a stool at Brewstirs with my name on it. Catch you tomorrow.