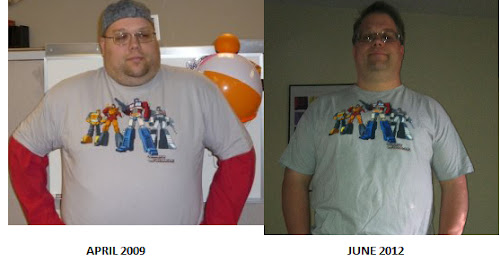 What a difference 3 years makes.

Believe it or not, this is actually the same shirt. It was a little tighter in 2009 than it is now. And the only way I could wear it was the 'FatTodd Method' (which consisted of wearing a long sleeved Tee under a much smaller t-shirt...it worked, but I'm guessing I wasn't fooling anyone).

Two of my neighbors said the following to me:

"You're looking more like the Todd I knew in HighSchool. If you had looked that when you moved in, I would have recognized you right away"

Both of these were amazing compliments...I don't know if they knew how much those two things touched me.

I'm down about 52/53 pounds now (depending on the day of the week) and still losing. The goal is to hit my target (225) by my birthday-5 months or so from now. And I have no doubt that I'm going to hit it.

I have some people asking me how I'm doing this.

And that's really it. Now, I'm not going to go in to a commercial on Advocare (even though I think it's a great company). If you want to know more about the 24Day Challenge or the other products, just ask.

Point is, though, there's no magic bullet. Even Advocare isn't a 'diet' or 'program' per se. It's a lifetstye change. You're going to be eating differently...exercising...and in generally feeling more energetic and ready to face the world.

I started another blog (I'll post the link to it later) to cover the whole journey to a healthy Todd thing. For now, I'm just pretty much trying to get back in to the habit of writing something other than a superficially deep FB status.

On that note, I'm going to finish my chicken and brown rice and head back to work.

Have a fantastic rest of your Monday.