Awwwwww....and the forging of the rings

This post (as most of my blogging posts of late) serves a dual purpose.  The first is to give me something to look back on from some time in the future and get a sense of where my head was at at the time. The second is really just to amuse anyone who might be reading it. In other words...it's a way for me to get that sh*t that's rattling around in my head OUT of my head. To make way, usually, for more things to seep in and rattle around.

Great. Now that we got that out of the way, we now paws for a moment of extreme cuteness: 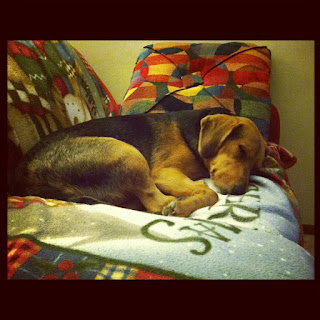 Awwwww.  He's so cute when he's all balled up and sleepytime. Max is generally a good pup....when he's not being all barky at nothing for no reason and dorkified.

Speaking of Sleepytime....I watched the opening ceremonies of the Olympics Friday night, because, well...TV had me convinced it would be mostly un-American to skip out on such programming.
I have to say...it pretty much kicked ass. I also have to say that they really should have stopped after the forging of the rings and that whole display of pyrotechnical awesomeness. The rest of it just seemed....well...masturbatory. I mean, it was neat..but seemed a bit--meh--to me. Dunno. Could just be me. But it seems like they peaked with the Rings bit.

And the parade of nations just never made any sense to me. To me it's like Golf or Baseball. I'm sure it's amazing for the athletes, but it's boring as sin to watch. And some of the commentating was just annoying. I left at Greece (I think), and headed to Brew-Stirs. Yes, I realize I missed Sir Paul McCartney. I'm ok with that. I dig him, but I can watch those clips any time thanks to the beauty of the interwebs.

Saturday was a pretty good day. Although it bordered on surreal. Mom and Dad are closing up shop. This weekend is pretty much the last weekend. They'll be out by Tuesday. My neighbor, Todd, is helping me load up things that we want. It just feels weird, scavenging through bits and pieces of that labor of love.... 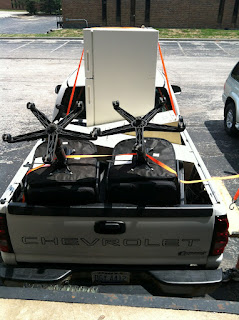 This is the first round of stuff we brought back. There's gonna be a few more trips today. Yeah. A teensie bit surreal to me. I just can't really imagine Dad not having a print shop.

We went from that yesterday to my grown up baby girl getting her first smart-phone. She got an iPhone. After which we went to MicroCenter to get a case for it (employee discount SO rules!). And, since we were in the area...we had to stop at Lily's for the BEST egg rolls in Columbus. Seriously. I think they must put heroin or something in these things because they are SO good. They don't ever feel greasy or heavy when you eat them. I can easily eat 4 in a sitting (although I stuck to 2 yesterday). I also got my new favorite, the Asian BBQ pork: 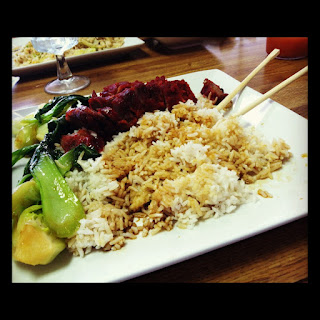 So tasty. With some fresh Bok Choy. Seriously, this stuff is amazing. And again, it doesn't feel heavy. I ate half for lunch and the rest last night for dinner. SO yummy.

Today on deck is more scavenging at Dad's. And then some photo editing. Should be a good day overall.

Hope your weekend has been equally as awesome! 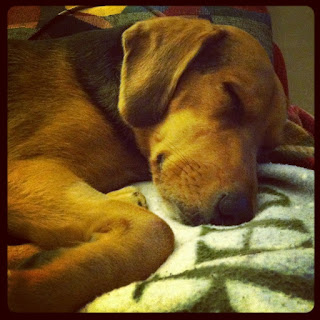 (figured I'd leave you with one more 'AWWWWWWWWWWW')