For a facsimile we must admit

Doug E. Fresh is good and makes a perfect fit...

Sorry...went back to my old school roots there for a second. There's probably 3 people reading this. Well, there might be more. But there's probably 3 people of the 5 people that read this blog with any kind of regularity (Todd's Blog, now with more Fiber!!)...anyway, what was I saying? Oh right. There are 3 people of the 4 dentists' patients who chew gum that will know what the title and first line of today's post reference. The rest of you can you tube it. I'm sure it's pretty high near the top of your search results.

I got a little chuckle today at lunch (which is to say, about 10 minutes ago, since I'm technically still AT lunch. I'm in the middle of a little Words With Friends action and decided to test the limits of the lexicon by playing a little Danzig. Words was having none of it. 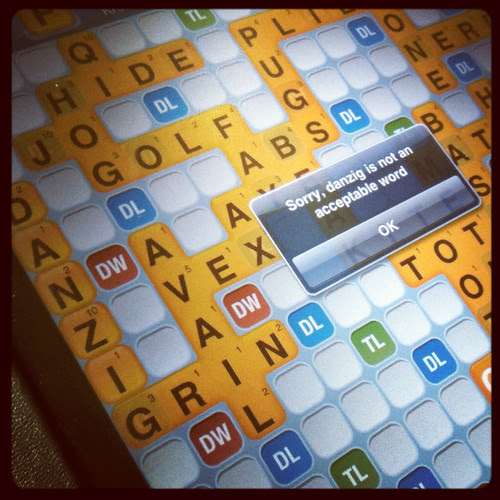 Which, really is kind of a bummer. It won't let you play "jawa" either. And I'm pretty sure that's been a word since 1977. The only bummer is that it doesn't always show everyone's real name (because it no longer has my facebook contacts to match up to). I thought I was actually going to make it entire post without talking about some aspect of Facebook. Oh well, there's always tomorrow.

Speaking of tomorrow, I hope I'm not TOO terribly tired. I go in tonight for a sleep study (which I think I've mentioned previously). Basically I'm doing it to get a new CPAP machine and get out from under the shite service of Lincare. But really I just want a smaller quieter CPAP that doesn't sound like Darth Vader after a chili cook-off.

And since we've brought up the Dark Lord of the Sith...seems like a perfect segue to talk about my upcoming work trip to the former home of the Colts. Yeah...I'm not sure what one really has to do with the other either. But in any event, I'll be spending 2 weeks in August in Baltimore helping get things in shape for the new store. I figure its ok to at least mention it since it's been announced in a press release, so I'm not spilling any secrets. And the Unicorn inlay for the counter tops will be in by then too. Oh...mayhaps I wasn't supposed to mention that. Strike that. Just forget I said anything about that. These aren't the droids you're looking for and what not.

Work is going surprisingly well, actually. I'm 4 months in to it and still love my job and get along well with the people I work with. Some better than others, but I'm chalking that up to the fact that I don't know the others well enough yet. And I get to learn how to operate the Scissor Lift in the next week or 2. Which is good, because will need it to run the Hydra tentacles...er...cables in the new store.

Part of me feels kinda bad that you actually read through that post. It wasn't really much more than a bit of inane ramblings. Which is to say...it's pretty much like the rest of the blog.

And with that, I finish up my lunch and head out to the rest of my work day. I was in at 7, so it will be an early day out (at about 4 or so). Which is cool.

Have a good one!

*the song is "Santa's Rap" by the Treacherous Three from the Beat Street soundtrack (Vol.1).