So....the sleep study that I thought was last night...

wait, before I get going on that. Did I really just start the post with 'so'?  I hate it when people do that in actual conversation, because it usually means that they are just talking over whomever just said something, or want all attention focused on what they are about to say, as though you should stop and give them your undivided attention. Well, I guess in that case it makes sense that I started the post out that way, but damn. I hate catching myself doing things that bug the crap out of me when other people do them. Seriously. I don't think very many people use the word 'so' correctly in conversation these days.


Which, if you look, none of those words would make sense where I used 'so' previously. So, I guess I used it incorrectly.

Do you ever have entire conversations with people in your head and then get mad at them when they don't remember the conversation later when you see that person in real life?

Yeah. Me either. Hehe.  "LOL" seems so fitting in some venues, but it seems like such a cop out on ye olde blogging blog. For reals. I mean, it's not like I'm not writing anyway. It's not going to kill me to find some way of letting you know I'm very amused. Besides, most of the time I'm not actually laughing out loud. I'm laughing quietly inside my head with a stupid smile on my face. And LQIMHWASSOMF is just too complicated to remember.  SO.....I won't do that either. 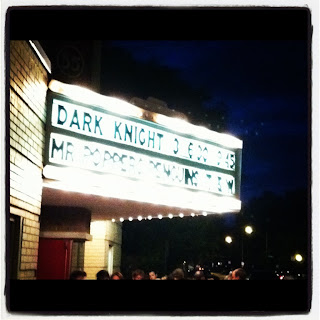 Yup. Saw this last night with some friends. And Yup. It was epic and awesome all wrapped up in to two hours and forty-four minutes of kickassery. I very much want to talk about it, but I don't really think I could do so without inadvertently dropping a few spoilers. Suffice to say--I pegged the trigger person early on in the flick. And no...I don't think I'm smarter than Batman. I just had the benefit of seeing other things going on that he didn't, because, well, he wasn't in that part of the movie I was just watching.

I love when people do that after seeing a movie or reading a book. They're all like "Jeesh! How come so and so couldn't figure that out? I figured it out in the first 10minutes/chapter." Well...perhaps because (A)they're fictional characters, and (B)they didn't see/read all the backstory you just did because they weren't in those chapters/scenes.

Anywhoo. The movie. It was awesome. I was talking to my friend Mobes about it (because I knew he'd already seen it and this was his second time) after and said 'Dude...that was awesome.' To which he replied "I know! I said that earlier. Didn't you see my Facebook post?"  I said (with some amount of glee, I will admit), "No. I didn't. I don't see ANYBODY'S Facebook posts anymore.

Seriously, though. The movie was epic. And the only reason I got to hang with my pals Mobes and Clarke last night was because the sleep study that I thought was last night is actually tonight.

And now, time to go get ready for work.

Hoping you have an awesome-sauce day full of Jelly. And hey, if Monday treats you poorly, don't take it out on Tuesday. Save up that annoyance for another 6 days and kick its ass next week. Always worked for me.

its really very informative an valuable post for me thanks for sharing here with us.