The most ironic part of telling someone that you have to have a 'sleep study' is that they instantly think that you're going to go do nothing but sleep soundly whilst being observed. This is only partly true.

There is a camera and mic in the room. And a control room from which I am monitored throughout the night.

But the 'sleeping soundly' part is bullshit.

Last night was, without a doubt, one of the worst nights of sleep I have had in quite some time. And I found out last night that the CPAP that I'd been using for the last 14 years was really only doing a slightly better than marginal job. My mouth still opened during the night. I still snored (both of which my wife will attest to). Not to mention the damn thing was really starting to annoy me.

This was the sky at dusk as I was getting wired up for the sleep study. 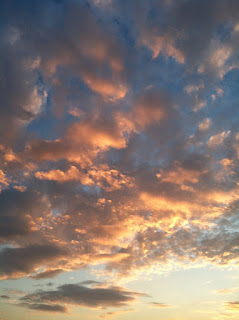 What's that? Oh...yeah....seriously, I was wired up. I'm pretty sure this is what the aliens did to me, too. It all seemed so oddly familiar. 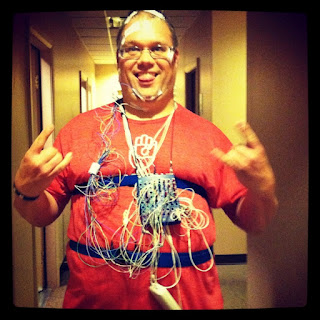 The sensors are glued...or rather pasted to my head...and various other areas around my body....then they stuck a tube around my face to measure air coming from my nostrils and mouth to see when I had a 'respiratory event' (or stopped breathing, in other words).

This was my view: 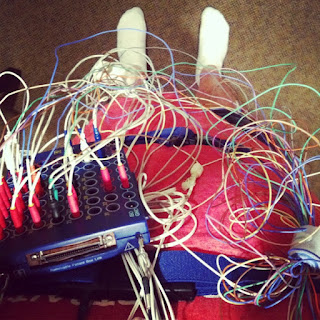 The RadioShack 101 Circuit Experiments box wound up hanging up to some thing next to the bed.

Needless to say, it was just not a good night of sleep. But what was cool about it, was that I got a new CPAP machine. It's smaller and WAY quieter than the one I've been using (think going to a Mercedes after driving a Yugo for 14 years). The only downside is that the mask is bigger and that's going to take some getting used to (but it's going to be better for me (and anyone trying to sleep around me).

So, yeah. Today was kind of like trying to swim in peanut butter coated jello after that. I'm still in something of a fog.

Speaking of fog....(so what...maybe I DO like starting every fourth paragraph with 'speaking of...'  hee hee...write your own blog if it bugs you so much. Haha!) Anyway...today was the last day of CS Graphics. 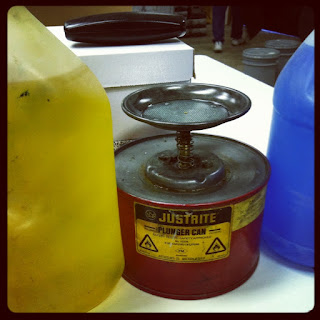 Memories from childhood are few and far between it seems. But one thing I always remember. The smell. The smell of a print shop. And going in on the weekends and seeing Dad getting a rag and getting some magic liquid on it using the above contraption. He would then wipe down the plates before putting them on the press.

I'm just a bit sad. I know it's technically a chapter in his life, but it feels like the close of a chapter in mine, too. I don't know quite how to explain it. But it's just weird. That's all.

And with that I leave you of something that amused me at lunch today...Words with Friends is always good for some laughs whilst munching on my brown rice and chicken with jalapeno salsa (and a nice healthy side of Tony Packo's Pickles and Peppers). 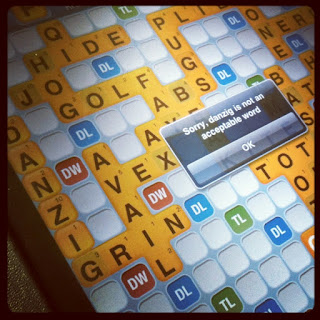 It just made me giggle quietly to myself.

And with that, I go. Hopefully I'll get a better night's sleep tonight.