What The French toast?

So...welcome. For those of you that are new here...welcome. My name is Todd. And I like to think of myself as a sort of a renaissance dude for the modern era. I'm sure there are actual rules and classifications, things that one must actually do before they can call themselves a renaissance man...and I'm pretty sure I haven't done all of them yet. But no matter. That's my story and I'm sticking to it.

I tend to view the universe a little differently...which is to say that I typically will re-read things I have written and fully expect others reading it to go 'dude...that's some whacked out shit. what the crap is this guy smoking?' To which I simply smile and say 'nothing man...I'm just wired this way.'

Regular readers may be wondering about the overly expository nature of the introduction to today's post. And...well..yeah. Thing is, I haven't written regularly in ye olde bloggy blogge for nearly 2 weeks and I'm just trying to really get back in to the swing of it all. I'm also buying time and trying to decide whether I'm going to give you one huge ass novella of an update for what's been going on the past 2 weeks or piece meal the isht in a carefully crafted Sweeps Week Mini-marathon event. Spoiler Alert: I still haven't decided.

I am however, crafting this particular post whilst on my lunch break and I'm guessing that the length of time needed to fully bring you up to speed is going to exceed my allotted lunch time.

But...yeah. That's not going to happen. It's pretty clear that this is just a 'Hey I'm still alive....don't abandon hope all ye who enter' kind of post.

The short version of the last 2 weeks (there will be longer versions soon)...is this:

I was out of town for work. I spent 2 weeks (with the weekend in-between at home) in a place just outside of Baltimore, Maryland called Towson. We're opening a new store out there in the fall and I was out there with another guy from work and we were running cable. Thousands and thousands of feet of network and coaxial cable for the new store. I have to say that it was quite possible the hardest I've worked for 2 weeks straight...just very physical, demanding work in the middle of a construction zone.

And you know what...it was satisfying as hell to get the job done. We worked up until after we were supposed to have left for the airport on the second week (you've never seen two guys happier to learn that their flight was delayed)...but we got every run of cable pulled. Over 300 cables.

Alright, I know that's not really much of an update...but hey...it's more than I would have posted in my previous stint in social media...and it's a little slice of Todd on a warm summer's eve...er...day (because Summer's Eve is something else entirely...and I don't really need to be blogging about that now, do I?

Before I leave...a cute pic of me and my pup. 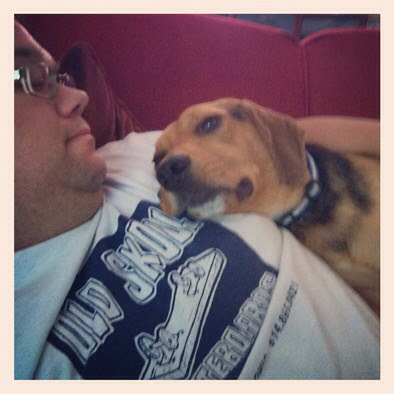 Have a kick ass Hump Day!

HA! Todd, you were just fine until the summer's eve thang man. That's so funny and a great way to leave the entry. Well, I can completely appreciate that I've known you for a while and you broke the chains of social media dude. Makes me smile. I get the Heebies when I begin to think that I have been swindled into some black hole conspiracy of "following". You know what I'm talking about right? Anyway, I plan on reading more that you have here. Yeah, I'm a little late but I'll catch up bro. We'll talk more soon Todd.
-Arik

I know what you mean, my friend. And we definitely need to catch up soon. Remember when we were talking about creating on the iPad? I got one a few months ago...and it's the bomb. Talk soon. -A.T.