Still Not Hating IT

I know that after 6 months at the 'new job' I should probably be at least annoyed by it. But the truth is...I still love the job and still feel like it's the best move I've made in years.

Sure...sometimes traffic annoys me. And sure, sometimes situations at the office annoy me, but to be completely honest, I don't mind those things in the least because of the simple fact that the job is so fantastic.

There really is something to be said for being given the opportunity to make a difference. When your boss comes to you and says "here's the vision for the team and I'd like you to help us get there"...and then actually listens to and implements my suggestions, it's pretty freaking amazing. 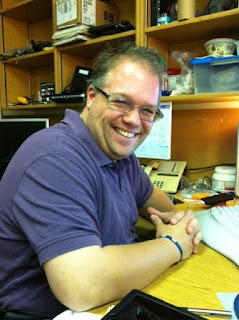 That guy is one seriously happy mo-fo. And that's no bullshit.

OK...sure...a few other things are going on in my life right now that are contributing, but that smile was genuine, yo. Now...to be fair,  that was the second pic. This was taken after I was asked 'Are you sure that's the pic you want all the Retail Operations Managers seeing?'

If you look closely, you'll see something that wasn't always in similar pictures in the past....space.
That's right. There's space between my belly and the desk. That's a fairly recent phenomenon for me. And I have to say, I quite like it. The only downside is that my snack catcher doesn't function as well as it used to. Now food might actually slip through the gap and wind up on the floor. Oh well, shit happens.

I'm also fully in to the exercise thing, too. My neighbors call me Hong Kong Phooey. Which might be incredibly racist if I had any ties to Hong Kong whatsoever, but as it stands I don't. It's actually quite funny because as a kid that was one of my favorite cartoons. I used to wear my bathrobe and jump off the couch doing my Karate Ki Ya's. My parents still talk about it. More so now because I'm doing HapKiDo. Which...I have to say is hard for me because the flexibility is just sadly lacking. It's helping to reinforce the thing, though, that I can't compare myself to others...I can only compare myself to me. My progress in the discipline cannot be measured against any of the other students (most of whom are further along and quite a bit more flexible than I), but only against where I was before. It's an interesting place to gain perspective from. And I knew it would be. My goal for taking it was not to be able to kick someone's ass, but to get that inner strength and balance built up and shifted in my favor.

Coupled with the cardio-kickboxing I'm doing 3x a week, I'm also seeing a difference in my body. I'm not losing the weight as fast as I was, but I'm also seeing muscle definition that I haven't seen in...well...years.

And I have to say, it's pretty fantastic.

This is the face of a guy who gets up at 6AM to blog:

I love the fact that cell phone camera are so advanced, but web cams are still crappy as isht.

And with that, I leave you to your day. Make it count.