I'm typing this entry on my new keyboard for the iPad. I know, it doesn't seem like that big of a deal...but little things amuse me. If you're interested, it's a Logitech K760. It's Bluetooth and solar powered. I could quote some BS about wanting to reduce my carbon footprint, but the truth is, I'd be making that all up. I mean, sure, I know it's important and I'm glad I can reduce my use of batteries but beyond that, I got nothing.

That being said...if you have an occasion for a portable keyboard, I'd highly recommend one. I'm actually liking it better than the actual Apple keyboard I've been working with (and quite honestly, I hated the fact that I couldn't turn that one of so I had to keep loading batteries in it).

Seems a silly thing to start the blog with, I'm sure, but it was actually the thing that was pressing on my mind at the moment. And really, I suppose that's what it's all about...living in the moment.

Speaking of the moment...tomorrow is kind of a big day for me.

I'm running the Warrior Dash. A 5K run and obstacle course in Butler, Ohio. I'm not going to lie...I'm nervous. Others who have run it have mentioned what a blast it is and have told me how I'll do fine and to just have fun with it. And that's what I'm planning to do.

I have some existential threads floating in my head right now. But to be honest, I'm trying just to get back in to the habit again. The writing habit.

And with that I leave you.

I hope to have some additional information and updates this week.

And here we go. Gonna have a brew tonight with my friends at Brew-Stirs and get some sleep before the big race tomorrow.

Sorry for the worse than normal ramblings tonight.

Well, other things seem to be changing in my life these past two months. This blog should be no exception. I will no doubt go back to the title "High Plains Thrifter" at some point for the simple reason that it's so damn catchy.

For now, though, Cooking For One is the working title of this blog.

It's rather symbolic of the adjustments I've been making lately. It hit me as I was going through cutting coupons (which is oddly therapeutic, it seems). I'm looking at food items and thinking of things I can make with said food items. And I'm realizing that every single one of my recipes serves 2-4 or 4-6, etc. No one has the recipe for just one person. If I wanted to make it for just one person, I could. It would just be a matter of cutting the recipe in half, or quartering it.

But that's a lot of work. Easier just to make more than I need at one sitting and have leftovers for the next day's lunch (or dinner depending on the size of the recipe).

And while that may sound logical (I'm a freakin' wunderkind at making things sound like they make sense), I'm finding that the practical application of said plan is somewhat lacking. I'm not quite sure what it is just yet.

Things are falling in to place. New connections are being made for neurons that used to fire along a path that is no longer there.

The new apartment feels like home. Ironically it feels more like home than the last place I lived. I know some of that was my own doing. I'm not casting the blame solely on my ex. Marriage is a big, heavy ball that is lighter when both people agree to carry the load together. Sometimes you have to shoulder the weight for the other person and sometimes they for you, but in general you're supposed to carry that ball together through the life you make with each other. In our case, neither one of us felt like the other one was holding up there side and the ball got left by the wayside. By the time we realized neither one of us had it anymore, it was the point where neither of us wanted to even try to find that ball and pick it back up. I'm not sure that we decided to mutually end the marriage as much as we both agreed at approximately the same time that the marriage was over and neither of us wanted to go back and try to make it work any more.

I, for one, will be better off because of it. I have to hope that she will too. But to be honest, I'm not even thinking about it. I have gradually, since moving out, been closing down the memories and pieces of me that still wonder how things are going for her. It's not my business anymore.

That's probably the biggest challenge for me--the identity shift. Going from being in a marriage to being single. To thinking of how things would affect an entire household to thinking of myself. From cooking a grand feast....

to cooking for one. 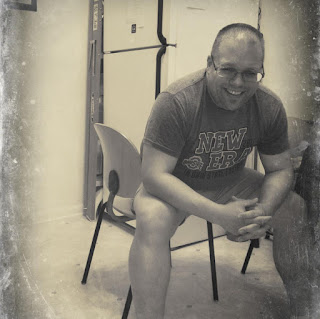