All I can say at this point is...thank god I can touch type. Because...well...I'm fairly inebriated. I've had the equivalent of 3 or 4 doubles of bourbon and 3 beers since we last met... which is to say since I wrote the last post. Which is really kind of a bagatelle anyway since both will be posted at the same time due to the fact that there is no internet service to speak of out here.

I've spent the last 2...or is it three hours taking night shots with my point and shoot house warming gift from Katie and David. To be fair..I say 'point and shoot'...but in reality...it's as close as Fuji comes to a DSLR in the 'consumer' arena. And it's a pretty kick ass camera. I just need to learn the quarks of it. That's all.

And for the last couple hours, I was trying to capture the stars. I'm way to fucked up to try to post any of them now. Irony again...because I will be stone cold sober by the time this post finally hits the airwaves.

Wow...I'm pretty much in a happy place right now. I have no pix from the last 3 hours at the moment. So this one will have to do. 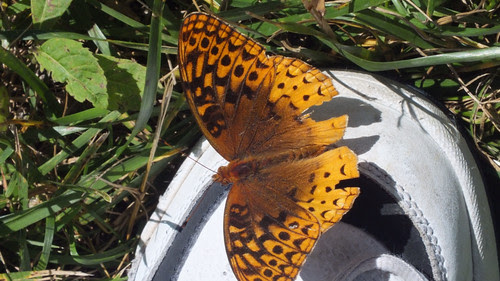 This butterfly hung out on my shoe for no less than 20 minutes. I got some video of it too which I will be composing an original track for and making in to a short film.

But for now, I'm hitting the sack...because the spins are on their way. And that's not a good thing. Best to get to bed before they hit.