The knee is still sore. I'm not entirely thrilled by the prospect of any kind of surgery on it if it happens to be torn (I'm hopeful that it's not). But Dad had a pretty good point "Pro athletes blow out their knees all the time and come back to their athletic careers. Why would it be any different for you?" FuckinA right, Dad.

So...that has me swimming with a certain sense of optimism. I'm also looking forward to the Dr. not recognizing me tomorrow. My last annual check up was over 2 years ago (I never really was very good at math). We'll see how it all plays out. Maybe I can capture her look of surprise. O_o We shall see. 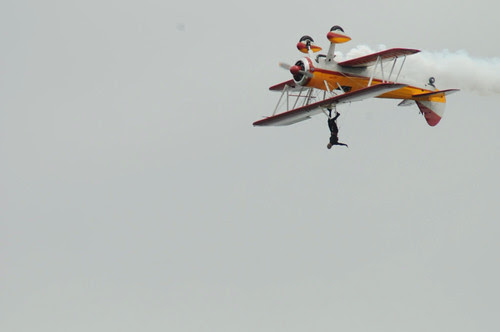 You know what's weird? Stopping to think that the last time you saw someone will be the last time you ever see that person. That's a weird thought. The above picture is of wing-walker Jane Wicker (and her ex-husband) performing at the 2012 Cleveland National Air Show. The act was amazing. I was in awe and probably didn't get as many cool shots as I would have wanted. But I got some. And that's pretty trippy to me to think that I am looking at pictures I took and at the time, that person had less than a year to live. Sure...it's a dangerous profession she chose...but damn. It's still trippy.

I could get all introspective about how it teaches us to live each moment with relish and gusto and that we shouldn't put off til tomorrow what we can do today and blabbidy blah blah blah. But the point is...it doesn't really work in this example. Sure...for her if she knew she only had a year to live, things would have changed. But she was not a part of my life so I couldn't really say 'gee, I wish I'd spent more time with Jane' Because really, that's not the case. I mean, sure...it's a huge bummer. And I will miss seeing her at air shows.

What's the takeaway on this? Don't sit on the outside of a fucking air plane and you have a better chance of surviving.

That wasn't meant to sound as cold as it might have. I just think that people look to Death and expect it to be some great teacher. Death is a shitty teacher. The lessons from Death flood us while our bodies are so jacked up on other emotions that anything we would hope to learn gets written off as being from a time when we were 'emotional' and they eventually fade...not really sticking. Until the next time Death opens up the lesson planner.

Fuck that. Start living. Don't wait for Death. Grab life by the balls and forge ahead full throttle. You think Jane and her ex-husband knew that every maneuver could be their last on the planet? You're damn right they did. You think it stopped them from doing what they loved? Not even for a second.

THAT is the real lesson.

Speaking of lessons, looks like lunch is over. Just in time too. Dude from next door came over to scope out our vending machine. His 'Aww crap' reaction can only be attributed to the fact that the Double Decker Little Debbie Oatmeal Cream Pie was sold out. That's ok, man. That shit has way too much cream. And the package doesn't pop like a regular sized oatmeal cream pie. Snack machine fail.

And with that, back to work. Peace out!!