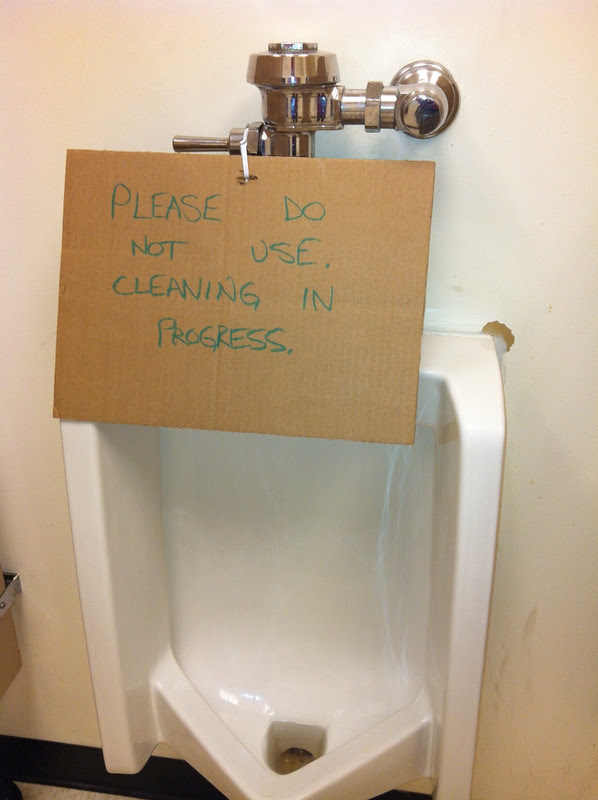 In the men's bathroom at my place of employment, there are 2 urinals of the stand up variety (three actual commodes, but that's irrelevant for this thought train). Anyway, where were we? Oh yes, the pissers.

So, last night as I'm leaving I see the above sign on the other urinal. I think to myself, "Interesting. They must be doing some kind of porcelain bleaching thingy" Or whatever kind of cleaning requires leaving something untouched for long periods of time. The sign was still on that urinal when I came in today.

Later, I see the sign has migrated to the adjacent toilet. I'm the first to admit I do not have a degree in the custodial arts, but to my untrained eye, it just looks like the standard water is in that urinal. Which may mean one of several things.

Either there was some kind of super cleaner in there that has since been contaminated by someone's overeager bladder and flushed.

Or the cleaner is some derivative of iocane powder. Not sure on the likelihood of that since I have not seen any signs of the Dread Pirate Roberts on these shores.

Or, there never was a cleaner. Someone just decided to fuck with people. Especially in that 10:23 AM time frame when the first of the morning coffee is making its hasty exit from the bladders of the locals.

In any event, it's just kind of silly to make that toilet unavailable for the duration of a normal work day. If you did one overnight, do the other one the next night.

The other thing...I would have put the sign over the area where one actually needs to urinate (duct tape would have worked just fine to secure the sign). That would have secured the super secret cleaning agent much better than the honor system (there is no honor amongst the incontinent).

Not that that's out of my system...that's actually not the first thing that came to mind when I saw the sign last night.

The first thing I thought was "That's a lot like some people's minds. You've given them a way for them to normally get the waste out of their system (their brains) and now you've just taken it away from them. So all that waste has to just float around in their head until the terlet is cleaned."

Annnnnnnd. Just like that the train is derailed. There doesn't seem to be any kind of preservation to the train of thought once it gets derailed. The Princess of Snarkytown totally threw me off track*.

And...erm...yeah. I think that's my cue to head back to my desk. I think I hear a report calling me...or something.

*this reference was not directed at you. Well, it was directed at one of you that may or may not read this, but probably not the one who thinks its directed at them. It's for that very reason that I tend to not blog directly about people I know (unless I really don't give 3 rips what they think about me or have no major import in my life any more). I made an exception in this case, in what will no doubt go down in history as the Snarkytown Incident.