The Myth of Cooking for One

Going on about 3 months now in the 'new' life. So far in to it, in fact, I can't even call it my 'new' life any longer. It actually gets closer to feeling like the life I should be living every day. Don't know if that means that I've been moving closer to acceptance or if I'm actually falling in line with the timeline that I'm supposed to be on in this lifetime. (Don't blame me, I've been watching Fringe a lot lately. But don't worry...I've known about multiple lifetimes for quite some time now).

There's a subtle irony in our culture. It's that of multiplicity. There is no recipe thus far that I've come across (with the exception of mixed drinks) that starts out designed for a single person. What this seems to mean is that the 'whole meal' is meant for more than one person. It's meant to be shared. That sharing with someone else makes things somehow complete.

If the lesson were that we are complete within ourselves, then every recipe would be for a single serving with some kind of scalable unit of measurement that could be incorporated when the meal was meant to serve more than one person.

I suppose it's the metaphor for life, isn't it? That we're not really meant to serve ourselves. Share the meal. Serve another.

It all sounds so nice, doesn't it. Meals made from scratch are meant to be shared. And maybe that's true.

How many 'prepared meals' (back when I was a kid we called them TV dinners...a story for another time)...how many of these meals are single serving?

Somewhere along the way, we went from home cooked meals that were meant to be shared with others to pre-fabricated meals of convenience that are meant to be consumed and easily forgotten. A source of (questionable) nutrition if you will.

I don't mind living by myself. Oh sure...ask me again in a year and we'll see what the answer is. But for now, it's what I need. I need to find myself again. I need to re-connect with the Todd that I used to be. I need to find that piece that I put up on the shelf and dust it off and see how the fuck it's doing. So...the living alone is fine.

It's the dining alone that's kind of a pain in the ass, to be quite forthright about it. I've often thought of just heading down to Clucker's or Jimmy V's many evenings, just for the interaction. I think the solution is pretty clear. I need to start having dinner gatherings. Or at least start having friends by. 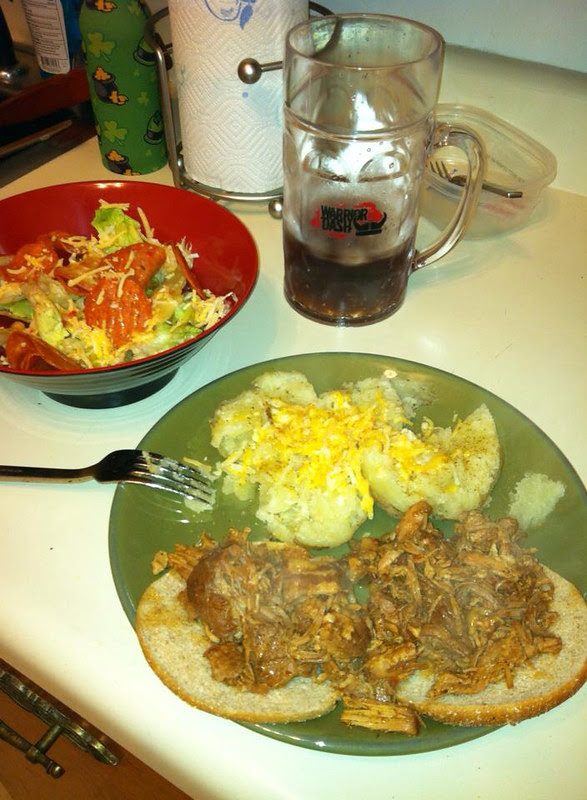 This was tonight's creation. A crock-pot recipe of pulled pork (serves 4). A baked potato and salad. Funny thing about the baked potato...I made 3 of them. I figured I'd have one for lunch tomorrow and one for...what? Not sure. A dinner guest? I don't know.
I have a feeling I'll be hanging with my neighbors more. It's a good area.
As with most of the blogs I've posted recently (And by recently, I mean ever), what I started out writing is usually not where it wound up going. I have a well thought out path and something along the way as I'm typing takes me a different direction.
I guess that's to be expected when there are so many thoughts in my head fighting to get out.

I'm going to go ahead and apologize ahead of time. I have a feeling that increased writing is going to becoming part of my healing mechanism. I say this based on past patterns of behavior (I'm right now looking at a book shelf with over 1200 lyrics and songs that were written during the period of my first marriage...cathartic and somewhat terrifying at the same time).

So, I guess what I'm saying is that in the upcoming posts, there are likely to be a few turd burglars. I'm honestly amazed that people (a)follow and (b) enjoy my stream of consciousness ramblings anyway. But who am I to argue. To tell you the truth, I'd be writing this shit even if there were no one reading it. On many levels, I'm not writing it for you to take in as much as I am writing it for me to get out of my head.

What can I say? It's a damn sight cheaper than therapy (I should know...I've gone that route, too).

I think I need to put a fork in this one before it gets really off-course (too late).

Time to check on laundry and cue up the next thought sequences for another blotter test...er...blog post.

Until the next becomes the time before,